Titration to determine the amount of hydrogen peroxide

I would not use potassium permanganate with sulfuric acid present:

You'll throw off your result due to the competing reaction..and risk a fire depending on the concentration of sulfuric acid.

If you measure the amount of $\ce{O2}$ produced by the decomposition of $\ce{H2O2}$ you can back-calculate how much $\ce{H2O2}$ was present in the sample. I think (with a decent certainty) that none of the species you list here should produce gas besides the peroxide.

That said I would use a catalyst (like $\ce{MnO2}$) for decomposition instead of a potentially reacting species (like potassium permanganate). You will likely get side reactions that consume the catalyst but they don't produce gas. So simply use excess $\ce{MnO2}$.

Measure the volume of $\ce{O2}$ produced (i.e. wait until the gas volume no longer increases) and use the ideal gas law (as a fair approximation) to get moles of $\ce{O2}$ produced. Once you have that, you can stoichiometrically determine moles of $\ce{H2O2}$ in your sample of known volume, thus concentration of $\ce{H2O2}$ (recalling that $2\ce{H2O2} \rightarrow 2\ce{H2O} + \ce{O2}$).

I've done this before with $\ce{MnO2}$ from batteries, washed thoroughly with water. I capture the gas produced in an upside-down grad-cylinder in a tub/beaker of water, e.g.: 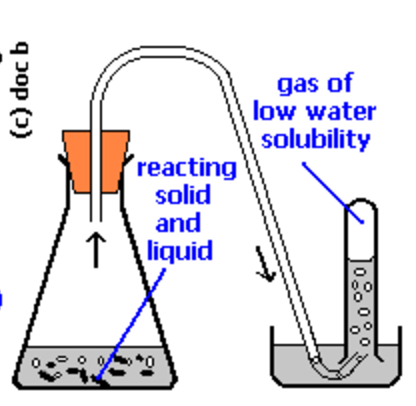 P.S. if you manage to / happen to get a pure $\ce{H2O2}$ sample, you can very accurately get concentration (in %) by the following:

Not the answer you're looking for? Browse other questions tagged redox analytical-chemistry concentration mixtures or ask your own question.

10
What does the phrase “reducing atmosphere” mean in quantitative terms?
10
Why is acidic hydrogen peroxide a potent oxidizer?
5
Is there a potentiometric method for monitoring salt formation in organic solvent?
1
Can an iodine clock reaction work without using a strong acid?