I will conveniently avoid entering into a debate as to what a hydrogen bond is, given the numerous theories which attempt to do so from various perspectives. I will, however, attempt to use the relatively cheap and easy natural-bond orbital (NBO) analysis method to examine the possible existence of an intramolecular hydrogen bond (HBond) in the ground-state, global minimum configuration of H$_2$O$_2$. In doing so, we will assume that the mere existence of an $n\rightarrow\sigma^{*}$ overlap indicates that an intramolecular HBond is indeed present (a commonly accepted metric). For comparison, I will look at the planar form of H$_2$O$_2$ (containing a trans-type bond configuration) in order to minimize any overlap between the oxygen lone pair and the corresponding $\sigma^{*}$ orbital. I note here that the NBO analysis is purely a qualitative method, and caution should be used when attempting to make quantitative comparisons with this method.

The H$_2$O$_2$ molecule was constructed in $C_2$ symmetry (Structure A). A full optimization and corresponding harmonic vibrational frequency computation was employed at the MP2/heavy-aug-cc-pVTZ level of theory, where non-hydrogen (i.e. heavy) atoms are augmented with diffuse functions. The basis set is denoted henceforth as haTZ. The magnitudes of the residual Cartesian gradient components of the optimized structure were less than $4.0\times10^{-5}$ $E_{\textrm{h}}$ $a_0^{-1}$. The frozen-core approximation was invoked for all computations. A subsequent NBO analysis of the fully optimized H$_2$O$_2$ molecule was performed at the MP2/haTZ level of theory using the SCF density. This procedure was also applied to a H$_2$O$_2$ molecule constructed in $C_{2h}$ symmetry (Structure B). All computations were performed with the G09 (Rev. D01) software package.

The NBO analysis of structure A reveals two $n\rightarrow\sigma^{*}$ interactions (where $n$ is an electron lone pair on oxygen and $\sigma^{*}$ is the $\sigma$ antibonding orbital of the neighboring O$-$H entity. The existence of exactly two of these interactions is due to the symmetry of the molecule, and only one will be reported here for simplicity.

The following figure illustrates the overlap of a lone electron pair on O with the adjacent $\sigma^{*}$ orbital in structure A. The occupation number for this antibond, 0.00351, indicates a very small overlap. The corresponding second-order perturbation energy E$^{(2)}$(donor$\rightarrow$acceptor) is a modest 1.74 kcal mol$^{-1}$. We note that this is merely an estimated measure of the strength of the interaction. 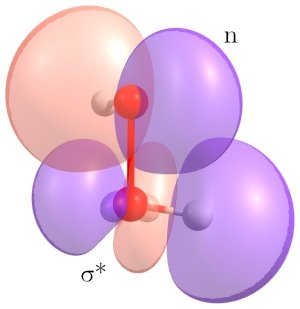 Interestingly, upon rotation of the torsion angle, $\tau$(H-O-O-H), to 180$^\circ$ (structure B), the $n\rightarrow\sigma^{*}$ interaction disappears. The intramolecular hydrogen bonding may play an important role in stabilizing the lowest-energy conformer in H$_2$O$_2$ (structure A) as the transition state, structure B, does not contain this interaction.

Comparing the strength of an intramolecular HBond to an intermolecular HBond is not straightforward. Intermolecular interactions are frequenly and efficiently computed by using the supermolecular approach by taking difference of the electronic energy of a complex and the energies of each non-interacting body which make up the complex. Intramolecular interactions cannot be determined in this way without breaking bonds, thereby skewing the resulting number. To facilitate comparison to the intramolecular HBond in H$_2$O$_2$, an NBO analysis was performed on the water dimer (H$_2$O)$_2$ (in $C_S$ symmetry) due to the presence of a strong, intermolecular hydrogen bond. The corresponding E$^{(2)}$ for an $n\rightarrow\sigma^{*}$ interaction is a much larger 6.82 kcal mol$^{-1}$, nearly 5 kcal mol$^{-1}$ stronger than that seen in H$_2$O$_2$

(Note: I strongly recommend performing a Bader analysis on H$_2$O$_2$ to compare with the NBO analysis before reaching any solid conclusions.)

Upon reflection of these issues, I conclude that there is, in fact, no intramolecular hydrogen bonding in H$_2$O$_2$.

My molecular models set has led me to believe that hydrogen peroxide can conform to form 2 bent hydrogen bonds and one bent covalent bond between the $\ce{OH}$ groups.

This means that there can be a triple bond between the 2 oxygen atoms. The triple bent bond (i.e., 3 banana bonds) of which 2 are of the hydrogen bond type and one is the Linus Pauling bent-covalent bond type, like in ethylene ($\ce{CH2CH2}$), tau bonds, banana bonds, bent bonds, and indirect angular bonds.