The second option seems much more likely as the ligand changes the $\ce{C}$ attached to metal randomly with time through rearrangements.

We know that crystal structures are not really that accurate with protons, hence I'd put a little more trust into the calculation at this point. The paper does not give a value for any protons.
Here is a picture of the calculated structure. 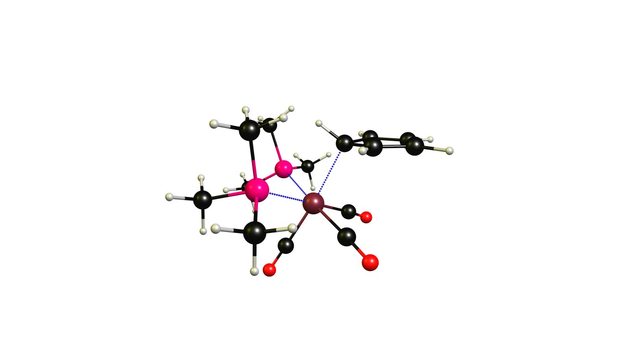 When we look at the canonical MO we will see that all (occupied) π-obitals of the Cp-ligand are still there. Obviously they are distorted, but clearly recognisable. 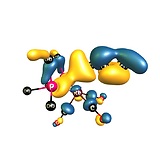 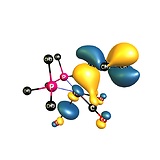 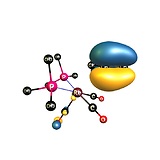 The second orbital is the HOMO-1, which is the main contribution for the coordination, and the last is the HOMO (click for large). The only s-contribution to the HOMO-1 is from the carbon of the $trans\text{-}\ce{CO}$-ligand (and some hydrogen).
In output numbers, missing from 1 are minor contributions (<0.05):

When we localise the orbitals with the Natural Bond Orbital (NBO) analysis, we find a lone-pair at $\ce{c^1}$ (blue/orange) which donates into the anti-bonding $\ce{Re-^{$trans$}CO}$ orbital (yellow/red): 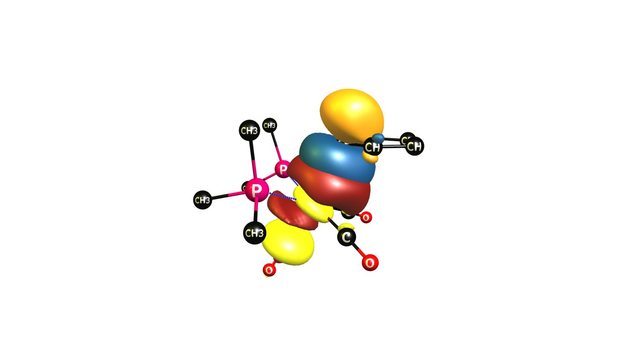 The composition of the lone pair orbital is

The low occupancy is normal for donor-acceptor-complexes with some covalent character.

TL;DR Most $\eta^1$ complexes are in first approximation π-coordination complexes like the definition suggests[2]. This may change significantly when moieties are altered.

Further thoughts:
Wikipedia makes one important statement (it rarely does, but here it is true)3:

You can expect that in $\eta^1$-ligands the metal can easily migrate from one carbon to another, as the MO show. I would expect some kind of pseudo-rotation.

Not the answer you're looking for? Browse other questions tagged inorganic-chemistry bond coordination-compounds hybridization or ask your own question.

4
What do 'sigma' and 'pi' in front of ligands in the formula of a coordination compound mean?

5
MO-Scheme of SCN- and its bonding properties when used as a ligand
5
Hybridisation of carbon atom in cyclopentadienyl anion
10
Metal carbonyl bonding
11
IS DMSO-o a σ-donor, a π-donor, or both?
2
Confusion Regarding Nitrogen Inversion
3
Sulfate and carbonate ions as ligands