What exact nomenclature rule define the naming of glucose 6-phosphate?

organic-chemistry nomenclature organophosphorus-compounds
Share
Improve this question
edited May 23 '16 at 7:21

Reading this closely, technically, the compound should be 6-phosphonoglucose but glucose 6- phosphate is acceptable usage, probably derived from considering it as a salt analogue rather the ester that it is.

Usually, many esters are named by functional class nomenclature. They are systematically named by placing the name of the hydroxylic component denoted by an organyl group (alkyl, aryl, etc.) as separate word in front of the name of the acid component denoted by the anion name derived from the appropriate acid, for example ‘ethyl acetate’. However, the current version of Nomenclature of Organic Chemistry – IUPAC Recommendations and Preferred Names 2013 (Blue Book) contains various detailed nomenclature rules for special cases.

Esters of sugars with phosphoric acid are generally termed ‘phosphates’. In biochemical usage, the term ‘phosphate’ indicates the phosphate residue regardless of the state of ionization or the counter ions present. However, systematically the names must differentiate between a true phosphate, $\ce{-O-PO(O- )2}$, and an acid phosphate, i.e., $\ce{-O-PO(OH)2}$, called a (dihydrogen phosphate). The prefixes ‘phosphono’, for $\ce{-PO(OH)2}$, and ‘phosphonato’, for $\ce{-PO(O- )2}$, are also used, to denote O-phosphonic acid derivatives.

Therefore, correct systematic names for the compound that contains the group $\ce{-O-PO(OH)2}$ are ‘ᴅ-glucopyranose 6-(dihydrogen phosphate)’ and ‘6-O-phosphono-ᴅ-glucopyranose’.

Correct systematic names for the corresponding compound that contains the group $\ce{-O-PO(O- )2}$ are ‘ᴅ-glucopyranose 6-phosphate’ and ‘6-O-phosphonato-ᴅ-glucopyranose’. 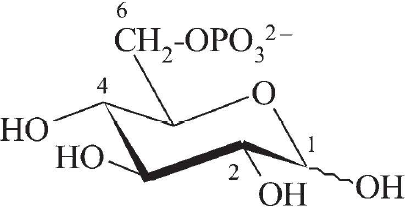 Not the answer you're looking for? Browse other questions tagged organic-chemistry nomenclature organophosphorus-compounds or ask your own question.