What is the mechanism of addition of glycine into 5-chloro-N-methylisatoic anhydride?

The following transformation is involved in a step in the synthesis of diazepam: 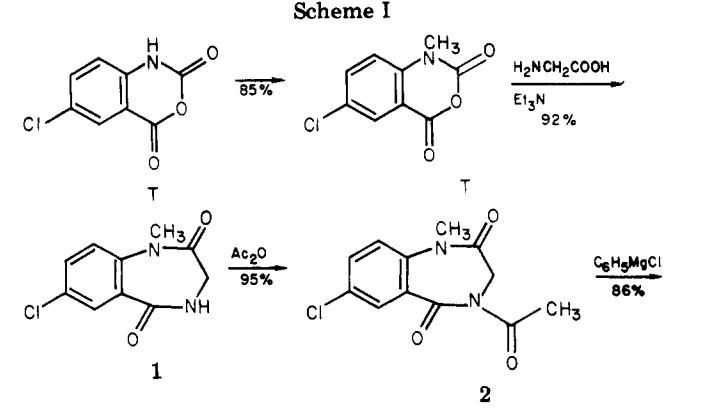 What is the mechanism of the transformation from the second to the third intermediate (N-methylisatoic anhydride to 1 via glycine in triethylamine)?

There are a few possible electrophiles and nucleophiles that could be involved here. Either the aniline could attack the glycine carboxyllic acid, or the glycine could attack either of the anhydride carbonyls. The paper, however, says that the glycinate is formed, so I don't think the former option is viable. Based on the pKa's involved, what might be the most reasonable proposal?

A mixture of finely ground 5-chloro-N-methylisatoic anhydride (5.19 g), 2.25g of glycine, 4.15 ml of triethylamine. and 30 ml of water was stirred at room temp for 5 hours. All solid material had disappeared after 3.5-4 h. Voilatile material was removed as completely as possible on a rotavap and the residue treated with 60 ml glacial acetic acid and heated to reflux for 4.5 hours. After the mixture cooled, as much acetic acid as possible was removed on the rotary evaporator, and the tan oily residue was treated with 30 ml of ether. On brief swirling of the mixture, crystallization set in, and the colorless crystalline materiual was collecting after standing overnight and was washed with ether (4.60g, mp 176.5-178°C). The etheral filtrate (two phases) was diluted with enough ethyl acetate to render it homogenous, washed twice with dilute sodium carbonate, then with water, filtered through anhydrous sodium sulfate, and concentrated. Recrystallization of the crystalline residue (0.53g) gave 0.43 g of product, mp 177-179°C. Total yield 5.03g (91.8%). 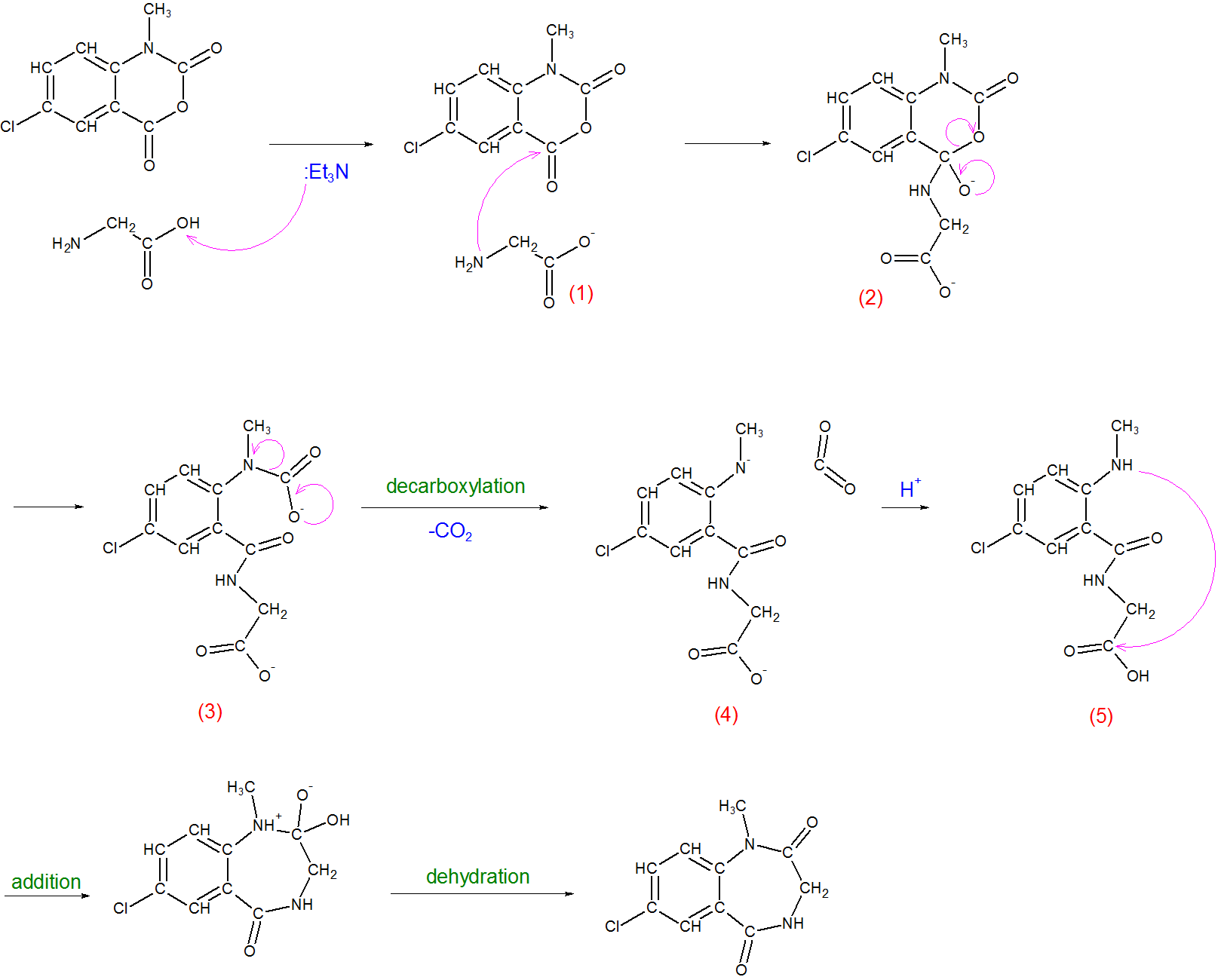 The glyine is deprotonated by the triethylamine to form $(1)$.

The nitrogen in the primary amine carboxylate attacks the carbon of one of the carboxylates in the 5-chloro-N-methylisatoic anhydride to form the complex $(2)$.

Some rearrangements of the electrons give $(3)$.

Then, our environment becomes acidic. All the carboxylate anions are protonated to become carboxylic acids. The ketone is not protonated. We have a neutral complex $(5)$.

It proceeds through addition/elimination to give us our desired product.

I propose the following mechanism. Contrary to the answer provided by DHMO, I do not believe that the hemicarbamate intermediate is stable. Instead, I assume that it breaks down into carbon dioxide and an amido anion immediately upon formation or very shortly afterwards. This gives us a nucleophilic amido residue which can attack glycine’s carboxylate function. If need be, we can supply catalytic protons to the carboxylic group before the amido nitrogen’s attack but I have omitted that in the scheme.

I consider the amino group of glycine to be the first attacker since it is most nucleophilic, and I consider it attacking the ester group since that should be more susceptible than a substituted hemicarbamate. Upon breakdown of the tetrahedric intermediate to give the first amide group, the free hemicarbamate anion is liberated which should immediately liberate carbon dioxide as stated above. The formation of the final amide linkage is thermodynamically favourable, even in spite of the unfavourable ring size.

I came up with this, but DHMO proposed the same mechanism first.

5
Reaction mechanism of a terminal alkene with an anhydride
7
Mechanism of Grignard addition to carbonyls
4
What is the mechanism for this nucleophilic conjugate addition?
4
Mechanism of Friedel-Crafts acylation with succinic anhydride