Confusion in naming a carboxylic acid with a cyclohexyl group

For the below compound .

According to me the answer should be 1-carboxymethylcyclohexane.

But the answer given as 2-cyclohexylethan-1-oic acid

Why the name given by me is wrong .

Whereas the name given to 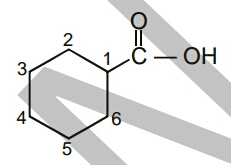 Why it is not 1-cyclohexylmethan-1-oic acid

According to the current version of Nomenclature of Organic Chemistry – IUPAC Recommendations and Preferred Names 2013 (Blue Book), the senior parent structure has the maximum number of substituents corresponding to the principal characteristic group.

Since the principal characteristic group is a substituent of the chain, and the ring does not have any substituents corresponding to the principal characteristic group, the senior parent structure of the compound given in the question is the chain and not the ring. The rules P-44.1.2.2 and P-52.2.8 for the selection between a ring and a chain as senior parent structure are not relevant in this case.

Therefore, the systematic name for the unsubstituted carboxylic acid structure that is given in the question is ethanoic acid (not ‘ethan-1-oic acid’ since no locants are used to denote the positions of the carboxylic acid groups in a hydrocarbon chain). However, the preferred IUPAC name (PIN) of ethanoic acid is the retained name acetic acid according to rule P-65.1.1.1.

The acetic acid chain is substituted using the usual principles of substitutive nomenclature.

However, according to rule P-14.3.4.6, locants are omitted where there is only one kind of substitutable hydrogen.

P-14.3.4.6 All locants are omitted for parent compounds when all substitutable hydrogen atoms have the same locant.

A good explanation of IUPAC rules for naming organic compounds may be useful. For carboxylic acids (which it is due to the $\ce{-COOH}$ group), the webpage says:

Carboxylic acids are named by counting the number of carbons in the longest continuous chain including the carboxyl group and by replacing the suffix -ane of the corresponding alkane with -anoic acid.

The reason it should be named as a carboxylic acid (instead of using carboxyl as a mere group) is due to precedence (and this is related to the comment by Loong):

The carboxyl group takes precedence over alkyl groups and halogen substituents, as well as double bonds, in the numbering of the parent chain.

The correct name is thus 2-cyclohexylethan-1-oic acid, as you said.

2
IUPAC Nomenclature for aldehyde
1
What is more important, to have the parent chain be the cycle or the chain that has an hydroxyl group

6
Naming compounds with an OX group
11
IUPAC naming for compounds containing carboxylic acid and anhydride together?
3
How do I name this compound
2
Numbering in IUPAC name of a trisubstituted cyclohexane
2
Help with naming molecule
3
Carboxylic Acid Nomenclature
1
Confusion in the name of this organic compound
1
Why does FeCl3 react with carboxylic acid, but not with sulphonic acid in this question?