Why do rare earth metal oxides vary in color so much?

I only know a little about what causes different color, but I know it has to do with the electron orbitals and how they reflect or absorb/emit incoming light. The rare earth metals are in the lanthanide series so they all have an identical valence shell.

I've worked with lots of chemicals, but there's not much that is quite the same as the bright and exotic colors produced from the rare earth metal oxides. I worked with the oxides in powdered form in ceramic glazes and they each vary greatly in color, with colors including pink, light blue, black, creamy yellow, and white. (After firing, lime green and grey can also be introduced). Why do they each produce such different and vibrant visual colors?

TL;DR f-f transitions in lanthanide ions give rise to the colours of the ions. The electronic states can be derived from quantum mechanics, and their energies vary from ion to ion, which give rise to different colours.. The colours are pale because these transitions are Laporte-forbidden and therefore weak.

These absorption bands do indeed arise from electronic transitions, but the theory required to describe them is more sophisticated than simple crystal field theory where one speaks of d-d* transitions. Instead one would have to construct the symmetries of the electronic states via direct products. In the case of the transition metals, there is some description here. For example, a $\mathrm{d^2}$ octahedral transition metal complex would have a $\mathrm{^3T_{1g}}$ ground state and there would be three spin-allowed transitions to excited states ($\mathrm{^3T_{2g}}$, $\mathrm{^3T_{1g}}$, $\mathrm{^3A_{2g}}$). Not all of them may fall within the visible region, but often, more than one of them do.

You can hopefully already appreciate that it is not as simple as "d-d* transitions" which would imply that the complex only absorbs at one wavelength.

Now, for the lanthanides, exactly the same principles apply. The lanthanides characteristically do not interact strongly with any bound ligands, and therefore the effect of the ligand field is almost negligible. The relevant electronic terms are therefore the atomic term symbols, which are obtained by Russell-Saunders coupling, which is more fully described in numerous physical chemistry textbooks. For example, consider $\ce{Pr^3+}$ ($\mathrm{4f^2}$). The allowed term symbols are

The ground state as predicted by Hund's rules is $\mathrm{^3H_4}$. There are therefore up to 12 different transitions that must be considered. In some other lanthanide ions, there are even more possible states.

The bottom line is that each lanthanide ion, with its unique electronic configuration, will have different excited states and different excitation energies. Therefore their absorption spectra differ and they display different colours. $\ce{Pr^3+}$ itself has the following spectrum.2 The lower excited states don't fall within the visible region. 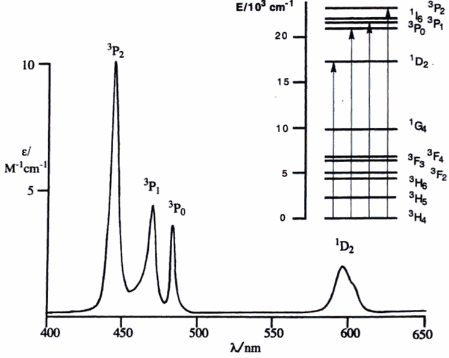 As for why they are "bright", that is simply related to the selection rules. For transitions between atomic states, the requirements are

which is the Laporte selection rule. The bottom line is that these "f-f transitions" (I am using this term to loosely refer to the collective set of electronic transitions) are parity-conserving and therefore Laporte-forbidden. Vibronic coupling, which is the pathway which allows this selection rule can be relaxed, is not of consequence in the lanthanide ions because of the lack of covalency; the colours are not intense, and therefore typically a pale colour is observed. (Compare $\ce{KMnO4}$ which has a fully parity-allowed LMCT transition; its dark purple colour is exactly the opposite of pale.)

Much greater discussion of the electronic spectra of lanthanides can be found in ref 3.

Not the answer you're looking for? Browse other questions tagged orbitals electronic-configuration elemental-analysis ceramics or ask your own question.

11
Derivation of the Orgel diagram for octahedral d2 complexes
0
What exactly is the d-orbital splitting and how does this affect the colors for transition metal compounds?

3
What's the electronic configuration of Nickel and Oxygen in RNiO3 (R=Rare-Earth)?
13
Why do octahedral metal ligand complexes have greater splitting than tetrahedral complexes?
3
Clarification on absorption spectra and crystal field theory