I have a question about Li-ion batteries. I sometimes see the two terms - intercalated lithium and metallic lithium - used when talking about this type of batteries and I was wondering what is the difference between the two?

I understand that the intercalation means that the Li cations are transferred from one electrode to another and that is why it is called intercalated lithium (or am I wrong?). But what about metallic lithium? What does that mean?

I found this on Wikipedia:

Li-ion batteries use an intercalated lithium compound as one electrode material, compared to the metallic lithium used in a non-rechargeable lithium battery

But what makes them different? In other words, what are the differences between intercalated lithium and metallic lithium? Can anyone help me to understand this?

Intercalation is the addition of lithium ions into a host material without significantly changing the host's structure. In my research, I will often prepare test cells where the cathode is an intercalation material, like $\ce{CoO2}$, which can accomodate (or "intercalate") layers of lithium ions between the oxygen layers in the crystal lattice to form $\ce{LiCoO2}$. It's not that there are layers of cathode material surrounding lithium, but rather there's only 1 material, but lithium ions can move into and out of it.

I mostly use lithium metal for the anode because it's easy to work with and has a stable potential, making it a good reference electrode:

In this setup we have an intercalation cathode ($\ce{LiCoO2}$), and a lithium metal anode. The major downside is that when you cycle lithium metal, it forms dendrites which can puncture the separator and short-circuit the cell, leading to catastrophic failure. To solve this problem, commercial cells use graphite anodes, which can intercalate lithium ions:

This solves the dendrite problem, but makes the battery less efficient. Since dendrite formation is only a problem with repeated cycling, non-rechargeable ("primary") batteries just use lithium metal instead. Lots of researchers have tried to solve "the dendrite problem" for decades, with little success.

The diagram below shows a lithium ion battery with an intercalation cathode on the right: the green parts are lithium, the blue parts are transition metals (Ni, Co, etc.) and the red spheres are oxygen. The anode on the left is the graphite intercalation anode, but you could replace it with a metallic lithium anode. 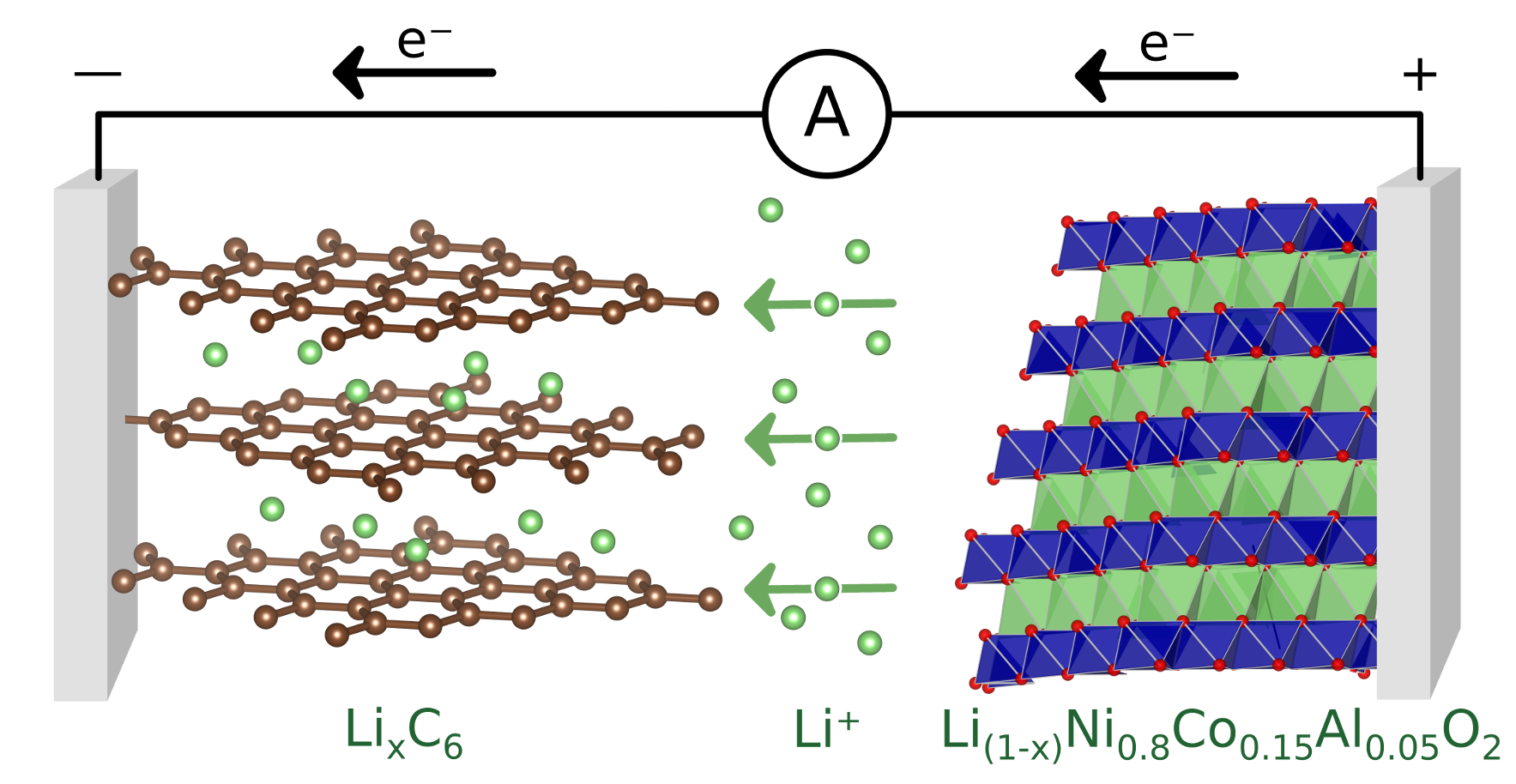 There is a lot of confusion about lithium as it exists in a lithium ion cell. Most articles are written by non-chemists who do not understand the fundamental difference between lithium existing as an ion (a positive ion or cation particle) and as a metallic atom (an electrically neutral particle). The plain fact is that one electrode of a lithium ion cell contains lithium oxide (or other ionic compound of lithium, such as a phosphate). In that electrode, the lithium exists as lithium ions as part of a lithium salt.

The other electrode can be just metallic lithium, but it has been found to be more practical, safe and effective for the life of the cell for the lithium to be layered with thin sheets of graphitic carbon, called graphene which is a bit like pencil lead.

A suitable electrolyte separates the two electrodes. Lithium hexafluorophosphate dissolved in an organic solvent, such as the ester-like solvent, ethylene carbonate, is usually used.

Intercalated in this context basically means inserted, or interposed. So an intercalated lithium-ion battery has sheets or films of material separating layers of lithium. According to this Wikipedia entry:

Separator materials in lithium ion batteries must not block the transport of lithium ions while preventing the physical contact of the anode and cathode materials, e.g. short-circuiting. In a liquid cell, this separator would be a porous glass or polymer mesh that allows ion transport via the liquid electrolyte through the pores, but keeps the electrodes from contacting and shorting. However, in a thin film battery the electrolyte is a solid, which conveniently satisfies both the ion transportation and the physical separation requirements without the need for a dedicated separator.

2
Why is lithium plating irreversible in Li-ion cells?
4
Lithium-ion batteries
0
Does Intercalation and Deintercalation of Lithium ions occurs in Half Cell?
4
Do dendrites effect lithium-ion polymer batteries?
4
Help me understand electrochemistry and batteries
1
Current in a Lithium Ion Battery
4
Nernst Equation for Lithium ion battery
1
Graphene in Lithium-ions batteries: why?