I'm trying to work out the catalytic cycle for the following process:

I gather that the palladium will be reduced from Pd(II) to Pd(0) in the process and that the 1,4-benzoquinone is a redoxidant. However, I am not sure where the palladium would be initially inserted (possibly one of the double bonds?) and how the chlorine ends up on the final product.

You don't have to wonder about which alkene coordinates to the Pd(II) centre. In this case, they are conjugated and therefore can coordinate together as a diene, which is a 4-electron donor. Many pi complexes are known ranging from alkenes (2e donor), to allyl (3e), to diene (4e), to cyclopentadienyl (5e), ... so this is not something really surprising.

Coordination of the diene to Pd(II) makes it more electrophilic. The pendant hydroxyl group simply does a 5-exo-trig cyclisation to form the C-O bond, generating a Pd(II)-allyl species. In terms of stereochemistry, the OH group has to attack anti to the metal. Deprotonation can happen with acetate, or the hydroquinone dianion that benzoquinone is later reduced to.

This Pd(II) allyl species is an intermediate in the well-known Tsuji–Trost allylation. In this case, the Pd-allyl species is being generated in a different way, but goes on to react in the same way. Chloride being a relatively soft nucleophile attacks the allyl moiety, again anti to the Pd, leading to a Pd(0)-alkene complex. The stereochemistry of the chlorine isn't indicated in your product but this is my guess at what's going on.

Dissociation of the alkene directly gives the desired organic product and reoxidation of Pd(0) to Pd(II) with benzoquinone regenerates the catalyst.

Looking this reaction up on Reaxys, it seems that it is taken from a 1991 article by Bäckvall and Andersson.1 The mechanism posited in the paper is identical to what I have written above, and on top of that my guess at the stereochemistry was correct: the authors indicate that the product obtained was 99% cis (referring to the chloride and ether oxygen in the product).

Interestingly, with $\ce{Li2CO3}$ instead of $\ce{LiCl}$, the product obtained has a trans acetate. Carbonate isn't a great nucleophile so it doesn't act as one, but it can deprotonate acetic acid. The acetate ion thus produced then forms a bond to Pd(II) before it migrates to the allyl system. 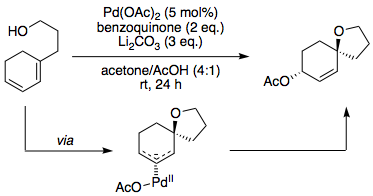 Not the answer you're looking for? Browse other questions tagged organic-chemistry reaction-mechanism organotransition-metal-chemistry or ask your own question.

3
Designing synthetic route to dicarbonyl compound
28
Why can't Pd/C and H2 reduce both the alkene and carbonyl portions of α,β-unsaturated carbonyls?
7
Bromination of a benzene based molecule
3
Hydrogenation side product: potential mechanisms for C-C bond making
4
How can I define alkenes using graph theory?
0
What happens to the chlorine in epichlorohydrin when a two-part epoxy is air-cured?
0
Could dimerization account for weak IR signals?
2
How do Lewis acids interact with 1,4-diketones and amines to form an alkaloid?