As I understand it, all of them should have same order of energy of molecular orbitals as a model for $\ce{NO}$ should withstand ionization and adding an electron.

As usual with these simple molecules: It's not as simple as it seems. Here it actually doubles down quite a bit more.
The short and very dis-satisfactory answer is: It is very, very complicated. For this reason, I am reluctant to present a molecular orbital diagram. However, I will provide calculated MOs. While it may be tempting to just look at the pictures, the rationalisation behind it is more important. What will follow now are a few attempts at that rationalisation.

In the nitric oxide series, $\ce{NO+}$ is surprisingly the simplest. Why is that surprising? Because it is isoelectronic with $\ce{CO}$; and this molecule is one of the most complicated ones there are. You can read a bit more about it here: How can the dipole moment of carbon monoxide be rationalised by molecular orbital theory?
I do compare $\ce{NO+}$ more with $\ce{CO}$ rather than $\ce{N2}$ to which it is also isoelectronic, because of the asymmetry introduced by the different nuclei. The molecule is the simplest to explain, because it is a singlet ground state. All electrons are neatly paired, and spacial symmetry can easily be matched with the degeneracy of the orbitals.
The π-orbitals are not the HOMO, instead it is the σ lone pair at nitrogen.

The next more complicated is $\ce{NO-}$, which is isoelectronic to $\ce{O2}$. In this case it is hard to find a less symmetric isoelectronic version. It is well known, that the ground state is a triplet because of the degeneracy of the π-orbitals. While we would expect the orbital ordering to be the same as in $\ce{NO+}$, it is not. This is mainly due to the fact, that occupied orbitals behave differently than unoccupied orbitals.
In some way, because of the paramagnetic character, we have a situation wich cannot be described by a single molecular orbital description. You need at least two: one for α-electrons (or spin up) and one for β-electrons (or spin down). The good thing however is, that both of these descriptions may still be matched with spatial symmetry.
The bonding π orbitals become higher in energy than the σ lone pair because the anti-bonding counterparts are partially filled.

The most complicated molecule in the series is the radical $\ce{NO}$. There is absolutely no simple description. Because of the unpaired electron, you need at least two descriptions again. However, this is not enough because now one of the spin-state description cannot match the spatial symmetry. This is because one electron cannot occupy two orbitals at the same time in an MO description. Because of that (from a technical point of view) the orbital degeneracy has to be broken. Physically this is not possible.
The molecule has to be treated with a multi-reference approach, i.e. one MO description for every possible configuration. It is probably safe to assume that the orbitals of π symmetry don't split that much and are higher in energy than the σ lone pair.

Below you can find the calculated MO. The level of theory used for $\ce{NO+}$ was RMP2/def2-QZVPP, because this is equivalent to the level the other molecules were treated, which is ROMP2//UMP2/def2-QZVPP. One can clearly see how the orbital symmetry for $\ce{NO}$ breaks the degeneracy of the pi orbitals.
For $\ce{NO+}$ MOs 5,6 and 8,9 are degenerated. For $\ce{NO-}$ MOs 6,7 and 8,9 are degenerated.
Colour code: blue/orange, α, β-occupied; purple/yellow-orange, α/β-occupied; red/yellow, unoccupied; contour value, 0.1. 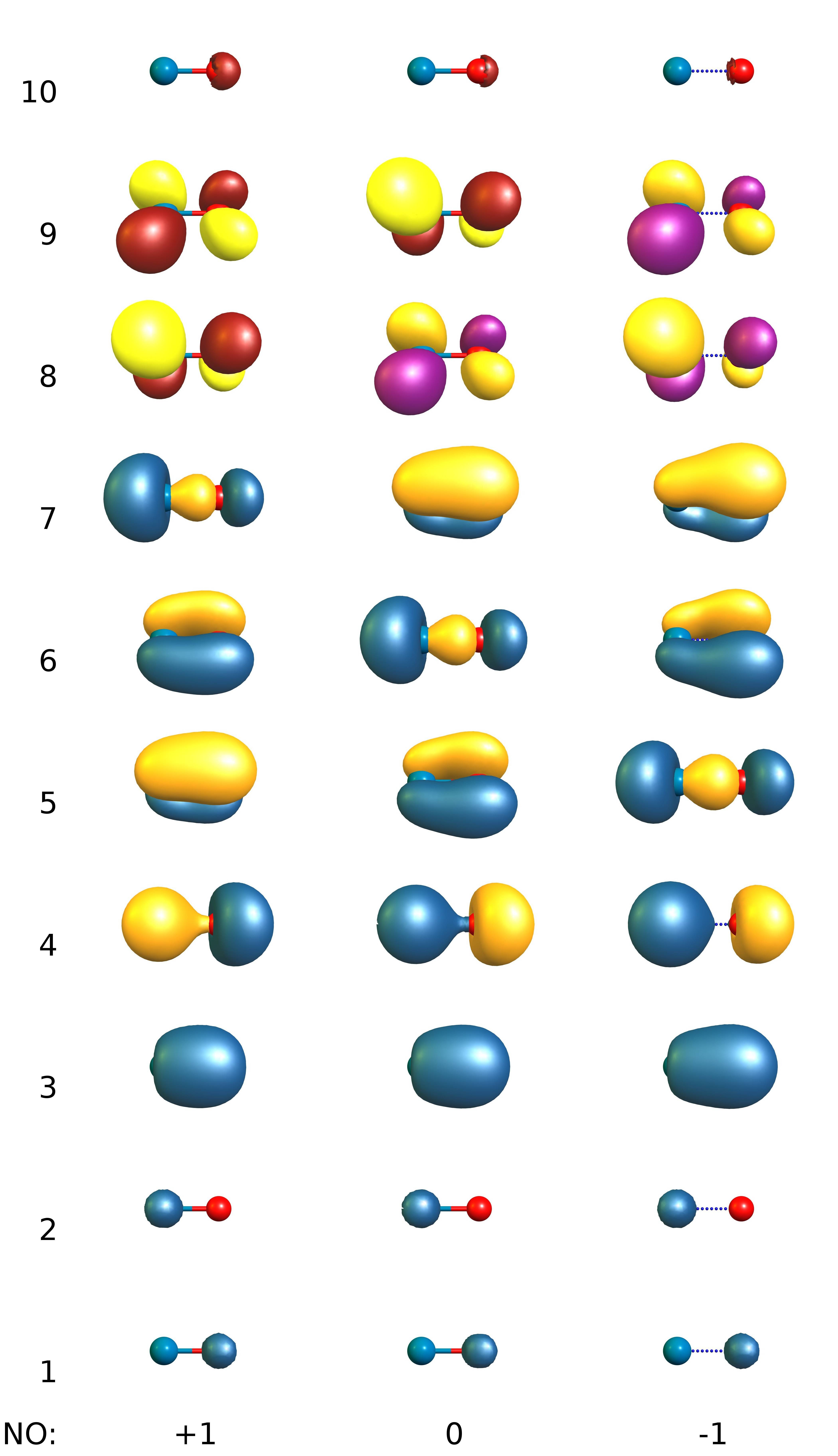 Not the answer you're looking for? Browse other questions tagged energy molecular-orbital-theory orbitals or ask your own question.

38
How can the dipole moment of carbon monoxide be rationalised by molecular orbital theory?
10
What is the dipole moment direction in the nitrosonium ion?
1
Nitric Oxide Dimerization
0
How do three-electron bonds work in MO theory?

13
Is s-p mixing referring to hybridization or is it the mixing of one atoms s orbital with the other's p orbital?
1
How to compare the energies of sigma and pi bonds in molecular orbitals of diatomic heteronuclear species?
3
Energy level of hybrid orbitals in the molecular orbital energy diagram
6
Hyperconjugation in ethane conformers
4
How to explain the excited states in the dinitrogen cation?