What is the significance of the kink in the [A] vs T graph for a 2nd order reaction? 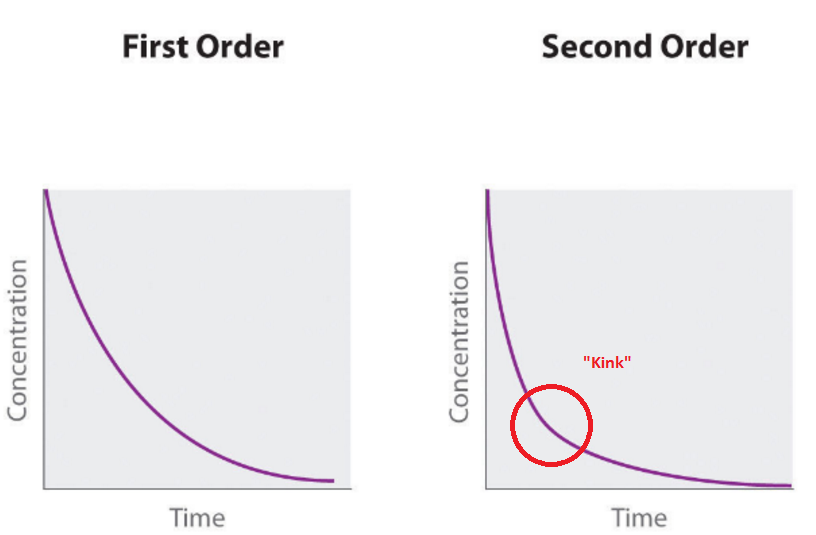 As orthocresol correctly notes, the presence of this kink is simply a feature of the $x$-shifted hyperbola that is the solution to the second-order kinetics problem, and the presence/characteristics of the kink will vary depending on the particular parameters of the problem.

However, this answer aims to demonstrate that:

In order to generalize the solutions to the first- and second-order kinetics problems, coming from a chemical engineering background my standard approach is to non-dimensionalize, then solve.

(Note that although I'm writing both reactions with $\ce A$ as the reactant, I'm assuming that these reactions do not occur simultaneously.)

To nondimensionalize, you define a new set of variables by dividing each dimensional variable by a scaling factor. Here, it makes the most sense to scale the concentration by the initial value:

The scaling factor for the time doesn't have an immediate, natural definition, so I'll use the generic variable $t^*$:

Then, these new variables are substituted into the original equations. The first-order equations become (using subscripts to indicate the order of the reaction under consideration):

The scaling constants can then be grouped on the RHS of the differential equation:

The form of $\eta$ reveals that it is dimensionless, along with all of the other terms in the equation. This approach allows representation of any 1st-order kinetics problem to be represented by a single equation, once appropriate values for the system parameters $k_1$ and $t^*$, and thus $\eta$, are defined.

Non-dimensionalization of the 2nd-order equation proceeds as follows:

The non-dimensional parameter $\kappa = k_2 t^* C_\mathrm{A}^\mathrm{o}$ is defined analogously to $\eta$, but has a different form due to the different reaction kinetics.

The solutions to the above differential equations are:

The derivations of the above are standard enough that I won't go into them in detail.

It will be useful later to have explicit expressions for the rates as functions of $\tau$. Substituting Eq. $(3)$ into Eq. $(1)$:

Now (finally!) to start tying these equations to the plots in the original question.

First, to demonstrate the utility of the scaled approach, consider the lower plot in the original question, where numerical values for the rate constant and initial concentration are given: $k_2 = 2~{1\over \mathrm{\mu M\, s}}$ (I'm assuming a typo on the units here) and $C_\mathrm{A}^\mathrm{o} = 10~\mathrm{\mu M}$. Further, the time scale has implicitly been defined by the choice of the domain of the abscissa: $t^* = 2~\mathrm{s}$. This leads to a value of $\kappa = 40$, which yields the following plot: 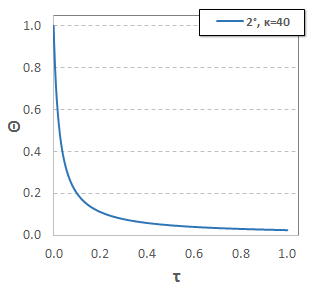 As can be seen, the visual appearance of the profile is essentially identical to that in the OP's plot. 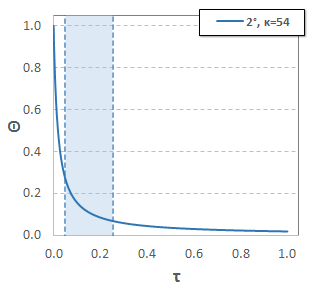 The highlighted band in the figure marks the range where the (non-dimensional) slope decreases from $4$ to $0.25$, and falls right on the "kink" noted by the OP. Qualitatively, it marks the transition region from the "high slope" to the "low slope" portion of the curve. It is the narrowness of this transition region $\left(\Delta\tau \ll 1 \right)$ that gives the visual impression of the "kink" in the curve.

There are a couple of ways one could compare this curve to a 1st-order curve. Naturally, one cannot define a 1st-order curve that lies exactly on the 2nd-order curve, as the two functional forms are different. However, after taking as given that $\Theta_1(0) = \Theta_2(0) = 1$, I see two intuitive ways of selecting a 'comparable' 1st-order curve: 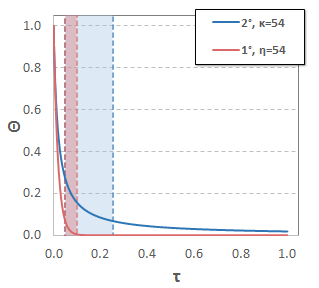 As can be seen, in actuality, one can introduce a "kink" into a 1st-order curve, given high enough a value of $\eta$. In fact, when the initial slopes of the non-dimensional curves are made to be equal, the kink in the 1st-order curve is more dramatic than that in the 2nd-order curve!

On the other hand, Case #2 looks much more like that depicted in the original question, without a visible kink in the 1st-order curve. Plotting for $\kappa=54$ and $\eta = \ln{\left(\kappa+1\right)} \approx 4$ gives: 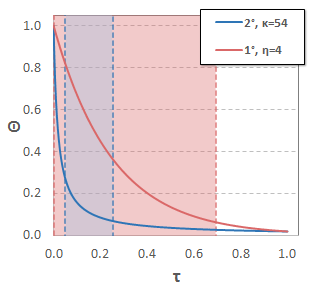 (This is is why I picked $\kappa = 54$ above, so that the value for $\eta$ here would be approximately an integer value.)

In this case, the slope transition region for the 1st-order curve is broad $\left(\Delta\tau\sim 1\right)$, leading to no perceptible kink.

Further, it’s possible to plot a second-order curve where no kink is present. Taking $\kappa = 4$, comparable with the above $\eta = 4$ curve, gives the following: 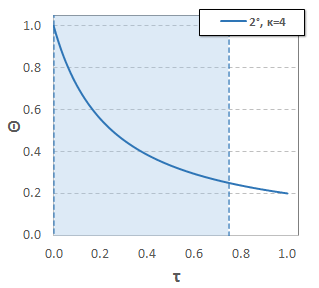 As with the first-order chart with $\eta = 4$, the broader transition region above corresponds to the lack of an observable kink in the curve.

So: To kink, or not to kink? The scale is the question!

4
What is the reaction order of a reaction?
2
Justify assuming first-order kinetics for a complex
8
What does a fractional order of reaction mean for the mechanism?
6
Half-life equation for 2nd order kinetics
3
what is the physical significance of ∆H=∆U for a chemical reaction?
0
Can an elementary reaction have zero order?
1
Finding the reaction order from a given plot of chemical kinetics