I'm having trouble drawing this molecule because I don't understand how the functional group Phenyl (by -ene suffix) can also be a substituent (by 1-phenyl). Also, what does the 1,3-butadiene mean?

ManishEarth put together the pieces to understand the connection of the atoms to form the molecule. Yet since the molecular structure requested in the original post is about (E)-1-phenyl-1,3-butadiene, the answer actually is opposite configuration:

By convention, alkenes posses a reference plane orthogonal to the plane of drawing. In case the alkene is substituted twice by groups attached at the termini of the alkene -- in the upper example a phenyl and an alkyl chain -- these may be either at the same or the opposite side of this reference plane.

For the ease of convenience, two drawings simplifying the substitutents by "R" demonstrate this. In the first example, they are opposing each other, so their relationship is described either by (E) or (trans). The second example shows them at the same side of the reference plane, therefore, this alkene has a (Z)- or (cis)-configuration.

You might ask about the origin of (E) and (Z). They are derived from German entgegen and zusammen; similar like the Latin (trans) for across, and (cis) for nearby. Both ways to describe these configurational isomers are found in the literature for one and the same molecule, yet in an article or report, you should stick to either the (E)/(Z) or (cis)/(trans). (And yes, in italics.)

Firstly, the phenyl group is just a benzene with a hydrogen removed:

the functional group Phenyl (by -ene suffix) can also be a substituent (by 1-phenyl).

The -ene suffix is about the double bonds in the system, in this case it applies to the butane backbone. It has nothing to do with the phenyl.

Also, what does the 1,3-butadiene mean?

1,3-butadiene is a butane backbone with two double bonds at carbon 1 and 3: 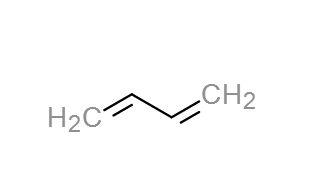 The final molecule will look lie this: 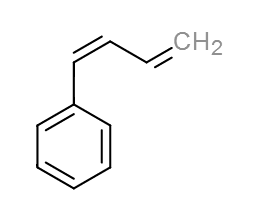 2
How can you predict relative Rf values of cis-trans isomers in thin layer chromatography?
10
How much steric hindrance does a phenyl group offer?
0
How to determine from the formula that there is a phenyl group present in the molecule?
25
Addition of hydrogen bromide to 1,3-butadiene: thermodynamic and kinetic control