How to Prepare a Buffer Solution?

I am given the task of preparing three buffer solutions at pH 10, 9.5, and 9.0. I have available concentrated ammonia and 3M hydrochloric acid.

By adding HCl to a solution containing ammonia, it will completely consume the strong acid. Resulting solution will contain ammonia and it's conjugate acid ammonium.

I think at this point I should make some assumptions:
500mL buffer to be prepared pKaammonia=9.25
Conc NH3 = 2M Ammonia in ethanol solution

It is pretty visible at this point though that I don't exactly know how to proceed. I have reached one variable but through processes that would not really hold up under scrutiny. The [NH3] that I have as my last variable is either [NH3]initial or [NH3]final but I have no idea how to determine which it is. I also feel I may have applied the wrong method from the start.

Any help at all in general guidance would be great! Thank you everyone.

I am an undergraduate chemistry research student currently in my senior year. I was given this task to be accomplished by next week. I of course will have to provide the calculations and necessary related information though before I will be able to perform any such task.

I am not trying to use this forum to circumnavigate any of that work that I must do. It is however difficult to get time with my research adviser currently so I am just trying to be as prepared as I can be walking into this situation.

I have taken classes were I have been walked through this same process but it definitely seems to be a "if you don't use it, you lose it" sort of deal.

I realize immediately I am new to this forum and am therefore being verbose simply to try and cover all of my bases. I hope that lengthiness in itself isn't more distracting. I have read through the posting rules and the homework questions rules and hope that my post reflects that I have.

I have also searched a great deal looking for related questions but many seem to have fallen victim to going off topic by simply asking a question and not putting any effort into its solution. Once again I hope I have navigated away from this pitfall.

If there is anything I can do to add clarity or stop this post from being thrown out please let me know so I can remedy the situation asap.

EDIT FROM COMMENT MADE BY OP - The buffer capacity desired is 0.1M and this was just gained as additional information. – hotmaildotcom1 16 hours ago

Thank you all for your assistance! Working through it after your guidance this is what I came to. There are more assumptions made that I will explain after the calculations as they will definitely be needed. 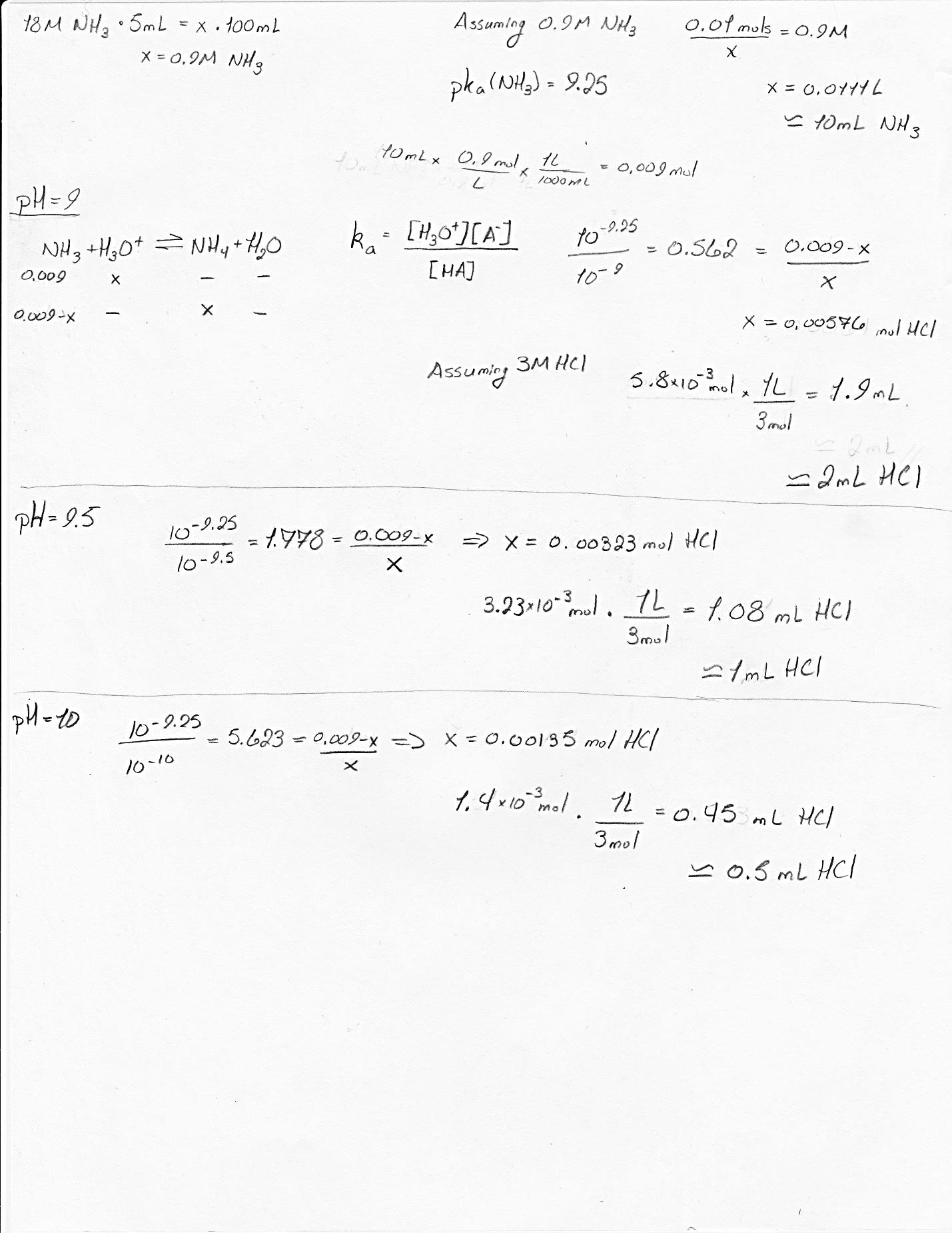 I apologize for any sloppy work but it is so much faster for me as a new guy to upload the work rather than type it out.

So after talking with everyone here I reassessed my approach. I will try and address each of my issues in a bullet point.

All of these calculations were ran by my PI and he signed off on all of them. Having performed the necessary precautions in order to work with these compounds, I carried out making all of these solutions. They all work like a charm without the need to add any additional acid or base in order to reach the desired pH's. I cannot thank everyone enough for your help and I apologize for taking so long to reply.

Finally I realize that this post is not really organized in a reasonable manner anymore in order to help anyone that might dig it up later. I am hesitant to delete any information in order to make things more legible. I simply did not have enough space in the comments sections in order to show that with everyone's help I was able to achieve a reasonable answer. If everything here checks out after review I will delete the "solutions" section and post it as the answer.

You have some of the chemistry wrong.

Looking at your assumptions, concentrated ammonia is typically in aqueous solution, as is concentrated hydrochloric acid. You could have ethanol solutions saturated with $\ce{HCl}$ and $\ce{NH3}$ but that would be unusual.

Since all three buffer solutions are in alkaline solution all the $\ce{HCl}$ will be reacted according to the following reaction:

The $\ce{Cl^-}$ anion is a spectator anion and will not effect the pH.

The ratio of $\ce{[NH3]}$ to $\ce{[NH4^+]}$ can be calculated based on the pH using the Henderson-Halbach equation which for the ammonia/ammonium equilibrium is:

The problem as stated however seems incomplete.

If you really must make the buffer solution using only concentrated ammonium hydroxide and 3 molar HCl, then there is a unique solution for each buffer.

However if you can add additional water, then there is no unique solution and you'd need to know the buffer capacity for each of the buffers.

Even though we are going to work with pKa of $\ce{[NH4^+]}$, let's nt forget that we are starting with "pure" ammonium hydroxide which ionizes as:

In "pure" ammonium hydroxide not much of the ammonia will ionize to ammonium, so we can assume

and the pH will be 11+. So we can add various amounts of HCl and create the needed buffers.

However there is a consideration. A 0.1 molar buffer means that given 1 liter of solution then:

Now a buffer would be made "best" at the pKa or pKb value of a chemical so that the buffer capacity was the same for either a strong acid or a strong base.

The buffers at 9.0 and 9.5 are reasonably close to the pKa of ammonium which is 9.25. So these buffers will guard against nearly the same amount of acid as base.

The last assumption is a "gotcha" of sorts. I haven't worked through the solution, but I don't think there is a way to solve all the constraints directly in one pass. I think the "exact" solution would have to be calculated iteratively. No problem for a computer, but it is painful by hand. So overall this is trying to avoid iterating using the quadratic equation.

Here is what you would do in the lab (2 recipes, depending on your needs):

The reason you do it this way is because buffer solutions are not ideal (by design, you want high concentrations of buffer substances, whereas calculations are accurate for infinitely dilute solutions). Especially if your buffer contains other substances such as high concentrations of NaCl, it is better to set the pH experimentally rather than do a calculation. Also, it is much faster.

Not the answer you're looking for? Browse other questions tagged homework inorganic-chemistry acid-base everyday-chemistry or ask your own question.

4
Differentiating between Titration, Buffer, diluted buffer, Deionized H₂O
5
What happens when 0.02 mole NaOH is added to a buffer solution?
2
How many moles NH₄Cl must be added to NH₃ to create buffer with pH=9?
1
Understanding a passage related to salt buffer
2
How do I calculate the pH of this buffered solution?
0
How to calculate the pH of a buffer after adding HCl?
0
calculating pH - is my answer correct?
1
Calculating pH when weak base is added to an strong acid