Here is the mass spectrum of isobutane:

I am interested in possible formations for its formation from the molecular ion $\ce{t-BuH+}$.

Some of the first mass spectrometrists to see this ion were Stevenson and Hipple in 1942.1 They were puzzled by it.

Fifteen years later, Rosenstock and Melton explained the source of this ion in an exhaustive study.2 First, the molecular ion $\ce{C4H10+}$ dissociates into fragments via five possible pathways, each with its own activation energy. See Table VIII in their paper, which I reproduce below.

None of these primary dissociation pathways gives rise to $\ce{C2H3+}$. Instead, it arises from a variety of processes from a subset (the metastable subset) of these five primary transitions. These processes are shown in Tables X and XI of their paper. 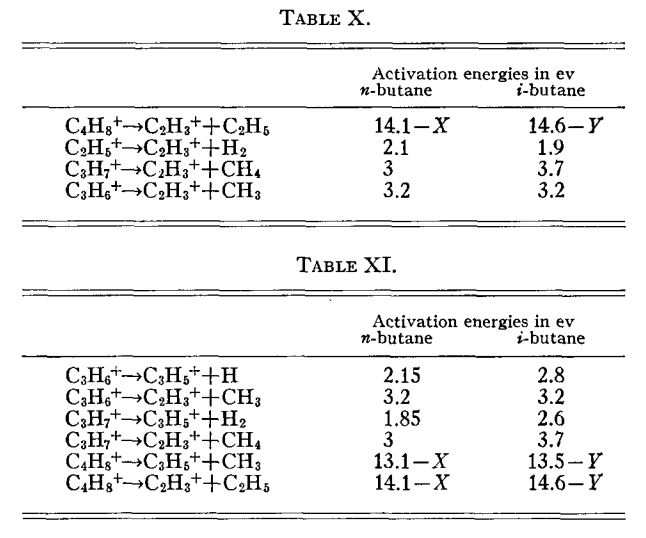 The general conclusions of their paper are worth quoting:

The basic concept of the quasi-equilibrium theory is that mass spectra are formed by a series of competing consecutive unimolecular decomposition of excited ions. The results discussed above lend strong support to this concept. It was found that of several possible reactions of a given ion, the metastable transition was associated with the reaction having the least activation energy. The general rate equation appropriate for these systems is the product of a frequency factor and a function of the excitation energy $E$ and activation energy $\epsilon$. When the value of $E$ is such that the rate constant is of the order of $10^6~\mathrm{sec^{-1}}$, the rate constant is extremely sensitive to the value of $\epsilon$. The result is that a second reaction having an $\epsilon$ higher by more than a few tenths of an eV will have a considerably smaller rate constant, even if the frequency factor is larger by a factor of a thousand. Thus, in general, the correlation can be carried out in terms of activation energies alone.

Not the answer you're looking for? Browse other questions tagged organic-chemistry reaction-mechanism mass-spectrometry or ask your own question.