What is the molecular structure of the fragment ion m/z 161 of rosmarinic acid?

Attached is an ESI-MS/MS spectrum of product ion scan of rosmarinic acid (m/z 359.10) (source). I'm trying to figure out the structure of the fragment m/z 161. It's not clear to me what the structure should be. Does a triple bond form perhaps? 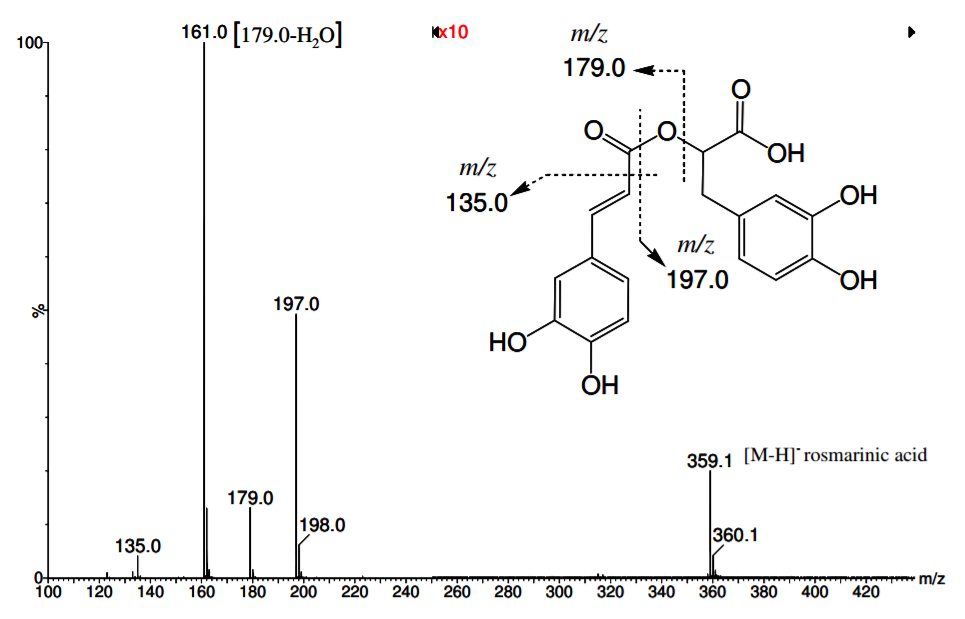 The source you link to says that the spectrum was acquired in negative mode.

The next question is where the loss of water comes from. It's worth noting that the mass spectrum of even just plain old catechol, $\ce{C6H6O2}$, shows a loss of water in negative-mode CID. That is, the parent ion $\ce{(C6H6O2 - H)-}$ loses water somehow to form $\ce{(C6H3O)-}$. I see no reason why the same thing couldn't happen to the rosmarinic acid fragment in question.

It's impossible to say for sure without doing a lot of esoteric spectroscopic characterization of gas-phase ions, or least the synthesis and fragmentation of a series of partially deuterated or $\ce{^{18}O}$-labeled rosmarinic acid isotopologues. Neither of those is an easy task (far from it), so it's nearly impossible to say for sure what the structure of the fragment is.

But think a perfectly reasonable proposition is that the ion is the same as whatever the structure of the catechol dehydration fragment is, perhaps a deprotonated hydroxybenzyne or maybe an epoxybenzene anion? Loss of aromaticity in CID fragmentation not unusual. In fact, a previous Q&A here on Chemistry StackExchange provides yet another example of this.

Not the answer you're looking for? Browse other questions tagged molecular-structure mass-spectrometry or ask your own question.

3
Interpretation of the following mass spectrum
7
Shape and polarity of the iodate ion
1
How can I find the bond angles for carbamic acid?
3
Fragmentations and rearrangements in n-(4-alkyl phenyl) alkanoic acids in mass spectrometry
2
Analysis of multiple spectra to determine an unknown structure
13
Are carbocations necessarily sp2 hybridized and trigonal planar?
0
How to identify the structure of an organic acid based on its reactivity, mass and NMR spectrum?
2
Can amide bonds fragment in ESI-MS?
6
How to find polynomial factor of relative (M+n) peak when factoring more than 2 isotopes