Competing resonance and inductive effects in a substituted benzene

A molecule of phenol is much more inclined to under go an electrophilic substitution reaction than a molecule of benzene because the $\ce{-OH}$ group is highly reaction favoring. From what I understand, this is because when the $\ce{-OH}$ group is attached, it contributes a resonance structure involving a double bond between the oxygen and the ring, which stabilizes the intermediate arenium ion.

However, from what I also understand, oxygen is also a highly electronegative atom and therefore inductively draws electron density away from the benzene ring. Despite these two competing effects (electron donating via resonance and electron withdrawing via induction), the overall effect of the $\ce{-OH}$ group is electron donating. This also applies to $\ce{-NH2}$ group.

Often, but not always, mesomeric displacement leads to a shift in prevailing over the inductive effect.

However, there are groups in which the inductive effect prevails, such as halogens.

No, this is not a general phenomenon.

Fluorine is much more electronegative than hydrogen, so inductively fluorine will remove electron density from the ring (-I effect).

Since the reaction rate for electrophilic nitration is decelerated in fluorobenzene compared to benzene, this indicates that there is less stabilization (less electron density to stabilize the positive charge) of the transition state in the fluorobenzene reaction than in the benzene raection. If the fluorine substituent is donating electron density through resonance, but overall the electronic stabilization has decreased, then the -I effect must overwhelm the +R effect in this case.

Your question reminds me of a doubt I had once. Consider the two structures shown below: 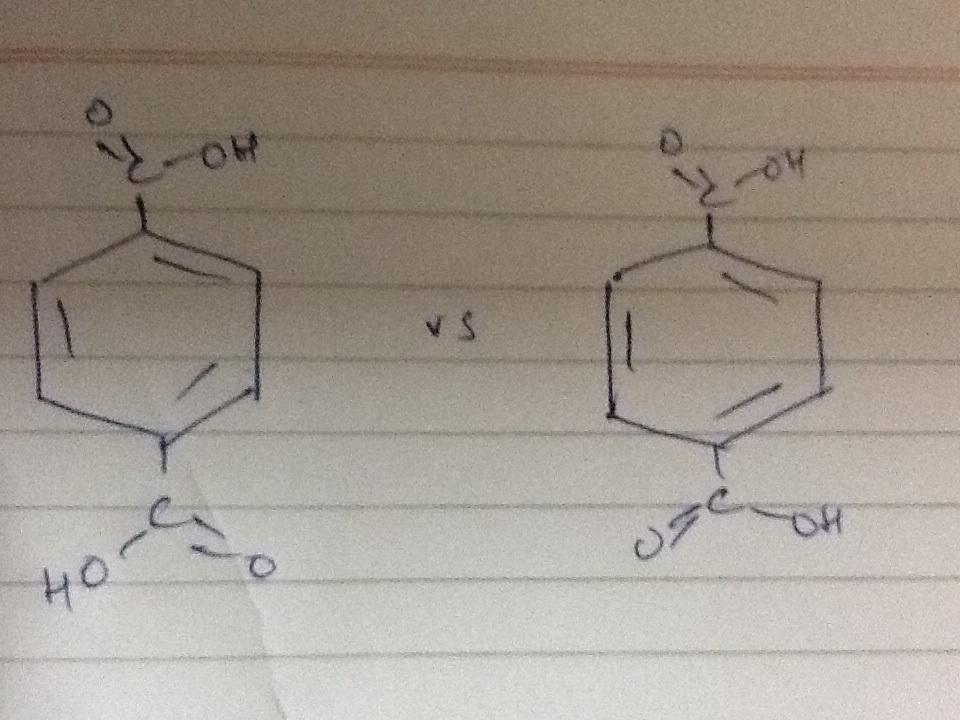 Can I say these two are geometrical isomers? It sounds a pretty dumb question, but here is the thing. One could argue that whenever we show that the $-COOH$ group is meta directing, we draw resonating structures that have a double bond between the carbons of the $-COOH$ and the carbon of benzene to which the group is joined to. Therefore one could say that the rotation of the carbon is restricted and hence are geometrical isomers.

But the thing is, that the rotation of the carbon in $-COOH$ is actually free(not exactly free, since it has to be in the same plane as the rest of the benzene, since it has $sp^2$ hybridization which confines it in a plane) and the $\pi e^-$ of the $-COOH$ group remains with it and doesn't get localized in the benzene ring. But this leads to a very natural question here- then how can we explain that $-COOH$ is meta directing? By inductive effect. Or at least that is what my teacher said.

-R (or -M) is shown by a group if a more electronegative element is attached by a double bond directly then it decreases electron density at ortho and para positions wrt meta and hence the group is deactivating. Considering the case of benzoic acid, electronegativity of oxygen plays a vital role , mainly because it attracts the $\pi e^-$s of the ring and decreases electron density over the ring. Although we can say that resonance does take place (which doesn't contribute much to explain why $-COOH$ is meta directing, as explained above), but the more contributing reason here is that oxygen pulls the electron density towards itself making the ring deactivated. So therefore in this case inductive effect plays a vital role here, even more important than resonance.

It could also be explained as to why $-COO^-$ is activating by the above. Since a -ve charge over a very electronegative element (oxygen) makes it very stable and kinda "calms it down" from attracting more electrons, therefore oxygen won't attract the electrons of benzene so much therefore relaxing the electron density of benzene a little bit and hence make it ortho and para directing.

Hence, as we can clearly see the electronegativity of oxygen here plays a vital role in making $-COOH$ meta directing and $-COO^-$ ortho and para directing. This is the best example to disprove your conclusion because here the overall effect by the oxygen is attracting electrons demonstrates a case where inductive effect is more dominant than resonance.

Not the answer you're looking for? Browse other questions tagged aromatic-compounds resonance or ask your own question.

2
Which one is more acidic – 3,5-dinitrophenol or 4-nitrophenol
3
In which all substituents does Inductive effect overpower Mesomeric effect?
0
Odd looking carbocation stability order
1
Why aryl halides are very less reactive towards nucleophilic substitution reactions?