Reduction of alkyl halides to alkanes 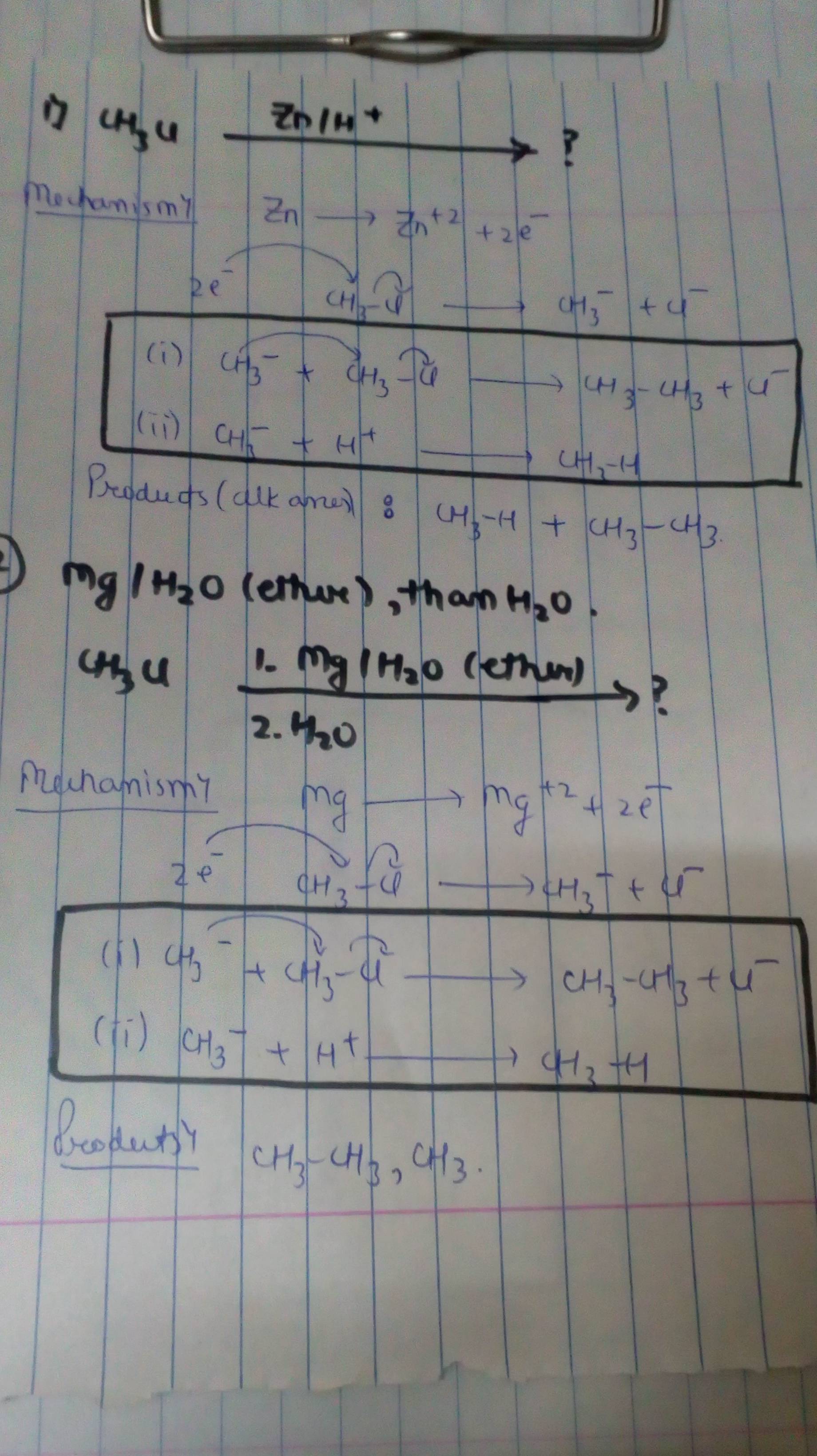 For all the three parts, only methane has been given as the product in my textbook.

In 1) and 2), according to the mechanism I wrote, I get both ethane and methane as products. I think both these products should be formed in good yield. Then, why my products do not match?

In 3) , I got methane as the only product as given in the textbook. Can you please check the mechanism? 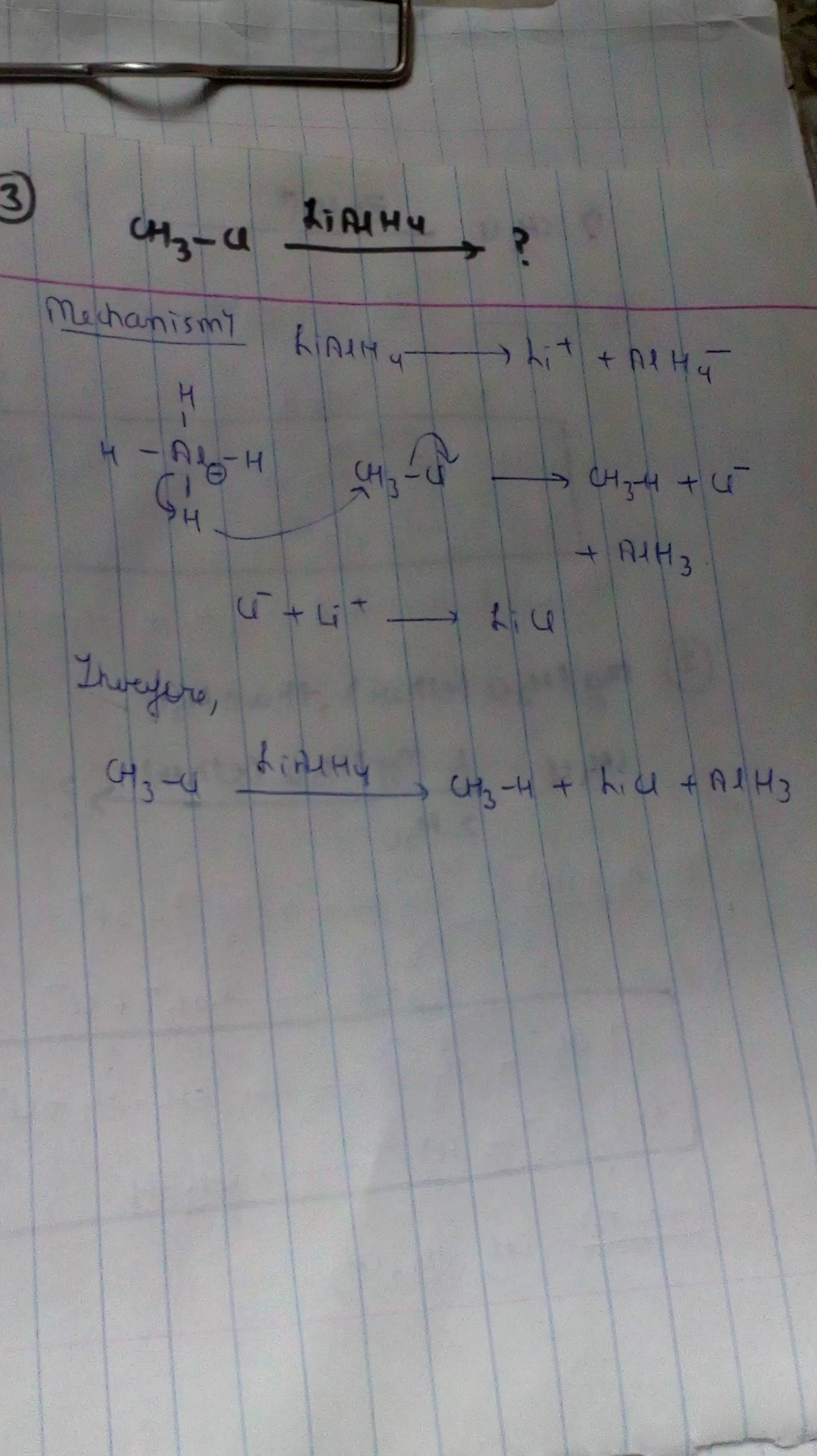 Your answer for question #3 is correct. However, there is a fundamental misconception you used in #1 and #2 that led to an incorrect answer.

In your notes, it seems that electrons from the metal ($\ce{Zn}$ and $\ce{Mg}$) somehow "attack" the alkyl halide and generate the methine ion ($\ce{CH3-}$). This does not happen for two reasons: Firstly, electrons are not free species in solution (like ions and molecules), they are only transferred from one molecule (reductant) to another (oxidant), so they cannot attack anything by themselves. Secondly, the methine ion is an extremely strong base (the pKa for methane is around 50, so the methine ion, its conjugate base, has to be VERY basic), which could only be produced by using an even stronger base to abstract a proton from it.

What actually happens in both cases is what is called metallic insertion. The metal ($\ce{Zn}$ or $\ce{Mg}$) is inserted between the carbon-halide bond, forcing the carbon atom to hold a partial negative charge (the author of this picture forgot to include the $\ce X$ atom bound to $\ce M$ in the organometal compound, but it is not that relevant here).

When it happens, you end up having a nucleophilic carbon, and it could indeed react with a $\ce{CH3Cl}$ molecule to yield $\ce{CH3-CH3}$ under a unimolecular substitution mechanism ($\ce{S_N1}$). However, such substitution reactions are very slow compared to acid-base reactions, and since you have acidic hydrogens available in both cases ($\ce{HCl}$ in question #1 and $\ce{H2O}$ in #2) the acid-base reaction (abstraction of a H atom from $\ce{HCl}$ or water) would happen fast enough to prevent the formation of $\ce{CH3-CH3}$ adduct.

4
Why are tertiary alkyl halides obtained in higher yield than secondary or primary during free radical halogenation of alkanes?
3
Which of the compounds give the same SN1 and SN2 products?
18
Are groups other than carbonyl reduced by Clemmensen reduction?
8
Hydroboration oxidation reaction on trans,trans,trans-1,5,9-cyclododecatriene with carbon monoxide
0
Why does the reaction of the primary alcohol cyclopentylmethanol with hydrogen bromide follow SN1 mechanism?
4
Acid catalyzed bromine substitution in an alcoholic ester. What is the major product and why?