I know that photolysis is when a chemical reaction (usually decomposition) is forced by photons. I also note that there is a general warming in the stratosphere, due to the photolysis of ozone $$\ce{O_3 + $h\nu$ -> O + O_2}$$ and the subsequent restorative mechanism $$\ce{O + O_2 + M ->O_3 + M}$$ where $\ce{M}$ is a third body used to carry off excess energy. To me, that says that the photolysis of ozone is an endothermic reaction, and the reformation of ozone is an exothermic reaction, as the free body takes away excess energy (assumably thermal energy).

Am I correct in generalizing that photolysis is generally an endothermic reaction? If so, could the enthalpy released by the second equation be quantified by the frequency of the photon?

In general it could be either. In your example you will have to work out the heat of formation of ozone and of O atoms (presumably it is an endothermic reaction). In general what the photon is doing is providing a way to overcome an activation barrier in the ground state by opening up a pathway from an excited state to the products. This last step is generally exothermic.

The enthalpy released in the second reaction is less than the photon energy by the difference in energy of the photon and that of products, an oxygen atom in your case as the heat of formation of O$_2$ is zero.

The sketch gives the general idea, I hope, for an endothermic reaction :) 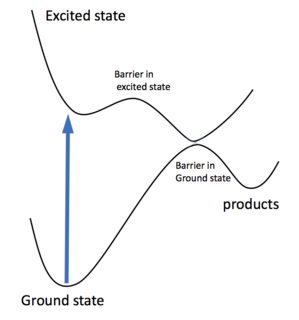 Not the answer you're looking for? Browse other questions tagged thermodynamics photochemistry or ask your own question.