Why does chloromethane have a larger dipole moment than chloroform?

Why does $\ce{CH3Cl}$, methyl chloride, have a larger dipole moment than $\ce{CHCl3}$, chloroform?

Now, when we replace one of the chlorines with a hydrogen, the net dipole moment equals $x+y$, (as they are in the same directions). Similarly if we carry out the same procedure for $\ce{CH3Cl}$ it can be proved that its dipole moment is also $x+y$. 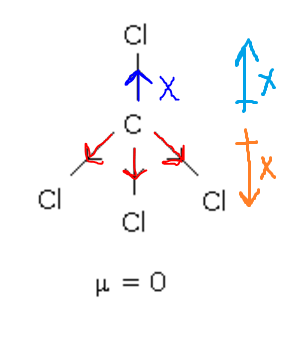 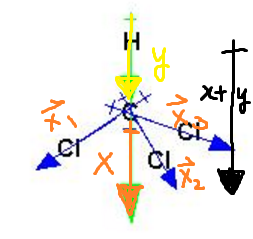 Where have I gone wrong?

Your conclusion is built on the assumption that the bond lengths will be constant. A bond’s dipole moment varies with bond length and thus for the vector addition to give the identical product, all $\ce{C-Cl}$ and all $\ce{C-H}$ bonds would have to be identical. They’re probably not.

Sutton and Brockway studied the bond lengths in chloromethane, dichloromethane and chloroform back in 1935 by electron diffraction.[1] Their results indicate that the $\ce{C-Cl}$ bond lengths don’t vary between the compounds in question as indicated in the table below. (Note that all chlorine atoms in each molecule are homotopic and thus equal bond lengths are theoretically expected.)

These results point towards the chlorine side of things not having an impact. But there is still the hydrogen side of things. Hydrogen atoms are generally very hard to locate in diffraction type experiments. X ray diffraction is observed if photons interact with electrons in a certain manner; hydrogen atoms do not have many electrons around them and are thus hardly seen. One needs to observe diffraction at very large angles to be able to locate hydrogens. I assume, although I don’t know, that it’s similar in electron diffraction. Indeed, the paper notes:

The two carbons in chloromethane and chloroform are, however, very much not identical. One is surrounded by three electronegative chlorine atoms which will strongly remove electron density from it, polarising the $\ce{C-Cl}$ bonds towards each of the three chlorines. The other will have only one such withdrawing partner. The different electron densities around chlorine are well represented by the corresponding $\ce{^13C}$ NMR shifts: $\delta(\ce{CH3Cl}) \approx 22~\mathrm{ppm}$; $\delta(\ce{CHCl3}) \approx 77~\mathrm{ppm}$.[2] The hydrogen shifts are also different in similar magnitudes, showing that hydrogen in chloroform is much more polarised than in chloromethane.

These different electronics must have an influence on the $\ce{C-H}$ bond length of the two molecules. I can’t imagine two electronically such different systems to have equal bond lengths. My assumption is that $\ce{CH3Cl}$ should have the shorter $\ce{C-H}$ bond lengths, since carbon is more negatively charged while hydrogen remains positively charged; this should give a slightly greater attractive force and hydrogen, being such a small element, immediately feels these. Therefore, instead of the final dipole vector $\vec d$ being equal in both cases ($\vec d = \vec x + \vec y$), we have one lesser and one stronger vector.

Because they are vectors and as such are not in the same direction within the molecule. from your example 4 x Cl atoms could be said to have dipole x - x = 0. You are effectively replacing 'x' with the dipole 'y' so the overall dipole for CCl3H would be 'y - x'. Similarly CH3Cl would be 'x - y' (so same magnitude but opposite direction).

What isn't taken into account with your model is steric deformation of the molecules. The three chlorine atoms missing their fourth to force a tetrahedral arrangement will adopt a much more planar arrangement; thus their contribution to the overall dipole would be reduced. The deformation and thus dipole in CH3Cl with the introduction of a single bulkier group would be less and therefore the overall dipole would be greater

It is a vector, parallel to the bond axis.This vector can be physically interpreted as the movement undergone by electrons when the two atoms are placed a distance d apart and allowed to interact, the electrons will move from their free state positions to be localised more around the more electronegative atom.

you can compare the dipole moment of both the molecules by these digrams. source:wikipedia. CHCl3

Not the answer you're looking for? Browse other questions tagged halides dipole or ask your own question.