What happens chemically to 5'-radiolabeled aqueous thyroxine (thyroid prohormone) when its I-131 undergoes beta+gamma decay?

In order to narrow the scope of the question to something tractable, assume that despite its low aqueous solubility the thyroxine is in dilute solution in deionized water, and that it bears a single $\ce{^{131}I}$ at the $5'$ position (click image to enlarge): 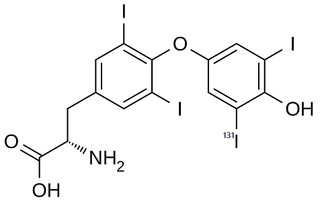 As well, as noted above, assume that the $\ce{^{131}I}$ undergoes its most common mechanism of tandem electron & gamma decay:

I assume the resulting chemical species remaining will start out as a (very transient) xenon-bearing cation: 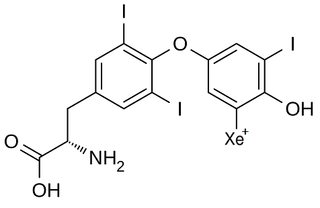 When the beta decay occurs it is likely that the C-I (or now C-Xe) bond will break. . The electron emitted in the beta decay will fly away from the molecule, the positively charged xenon atom will now pick up an electron from the aqeuous solution.

The Szilárd-Chalmers effect needs to be considered, it is typcial that when a radioactive decay occurs that the bonds to the atom at which they decay is will be broken. The recoil energy from the beta emission should be able to break the C-I bond.

I suspect that the bond will break to form a carbon centred aryl radical. This is a very high energy organic radical which will be likely to react with dissolved oxygen to form a Ar-O-O. radical. This in turn will abstract a hydrogen from another organic molecule to form Ar-O-O-H.

When this decomposes the O-O bond will break thus forming ArO. and HO. The ArO. will abstract a hydrogen from another organic solute to form a phenol. I know that 8-hydroxy-20-deoxyguanosine (8-OHdG) in urine is associated with exposure to radiation in humans. See S. Kato et. al. JOURNAL OF PEDIATRICS, 2015, volume 167, pages 1369 onwards. Also see the work of Martin Tondel et. al., ARCHIVES OF ENVIRONMENTAL CONTAMINATION AND TOXICOLOGY, 2005, volume 48, pages 515-519.

This work on this DNA marker for radiation damage does to my mind support the hypothesis that the autoradiolysis of the thyroxine will create hydroxy compounds. When S. Cefova et. al. irradated emulsions of nitrobenzene and water they did observe the formation of nitrophenols which lends further weight to the idea that the product will be a phenolic compound.

My guess would be the following: The electron generated by the decay would most likely go either towards the O or the H. In either case, the oxygen (due to its electronegativity) will atract the electron forming an ion, and the hidrogen will be displaced. The oxygen will form a double bond and stabilize. The hydrogen will attack the xenon and take it's place, as the molecule will be more stable that way. The xeonon will just float off.

That's what seems logical to me that will hapen in an aqueous solution. What will happen in the human body might be different, as different molecules will most likely be in the vicinity of the thyroxine molecule.

Below is a crude drawing in paint in order to help you visualize. 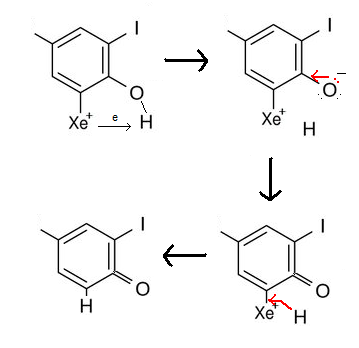 Not the answer you're looking for? Browse other questions tagged organic-chemistry halides radioactivity noble-gases or ask your own question.