Oxidation state of tungsten in W3O8

Recently I came across this equation:

The compound $\ce{W_3O_8}$ that appears in the right hand side of the equation seems to be mixed oxide. Normal calculation of the oxidation state of W in the compound yields $\ce{\frac{16}{3}}$ which is a fraction. A google search on the compound does not give any good results too.

So, is $\ce{W_3O_8}$ a mixed oxide? What are the oxidation states of the different tungsten atoms?

TL; DR: If you are forced to list the formal oxidation states, then with a high level of confidence it's tungsten(V,VI) octaoxide $\ce{W^{VI}W^V2O8}$. However, the real product of this reaction would be a number of non-soichimetric tungsten(IV,V,VI) oxides. Formation of molecular oxoclusters or peroxo compounds is very unlikely.

I would expect that $\ce{SnCl2}$ in acidic media would have comparable reducing effect. With the moderately mild reducing agent such as tin(II) chloride there is very little chance of ending up exclusively with $\ce{W3O8}$. Also, a presence of a reducing agent also eliminates a possibility of the formation of the peroxo-compounds, so that with a high level of confidence we are dealing with oxide $\ce{O^2-}$ ligand.

I find it equally improbable that any cluster formation takes place. For the existence of a polyoxotungstate cluster the terminal $\ce{W=O}$ bonds must be "disarmed" in order to prevent further olation/oxolation and aggregation into bulk metal oxide. This is often achieved via the template effect, however even reduced by 1 to 6 electrons forms of 12-heteropolytungstates $\ce{[(P,Si)W12O40]^3-}$, the phosphate- or silicate-templated Keggin structure — one of the most stable — only exist briefly in solution [2, pp. 341–343]. In the presented system there is no suitable anion to preserve the three-membered $\ce{W3O8}$ ring, and it's very likely going to hydrolyze quickly.

To sum these thoughts up, the more appropriate way to write the reaction would be

where $\ce{W_nO_{3n-1}}$ is homologous series analogous to the mixed-valence tungsten blues. On crystallographic level this can be seen as withdrawal of oxygen atoms from $\ce{WO3}$, which is isostructural to $\ce{ReO3}$ (Fig. 1a). New point defects are eliminated by introducing a crystallographic shear (CS, Fig. 1b). As the reduction proceeds, the octahedra $\ce{[WO6]}$ in this structure changing from corner-sharing to edge-sharing motif (Fig. 1c). (Caption and adapted illustration from [3, p. 1086].)

It's impossible to deduce exact oxidation number for such structure with floating stoichiometry, but sure enough an average oxidation number of tungsten can be found trivially from the $\ce{W_nO_{3n-1}}$ formula:

The sample examined was prepared by partial reduction of $\ce{WO3}$ with carbon at high temperature in combination with high pressure. The reaction occurred between the graphite container material and a pressed tablet of $\ce{WO3}$ in a closed system ($T = \pu{1773 K}$, $P = \pu{50e5 kPa}$). [...] The product obtained was a mass containing minute dark-red crystallites. The colour suggested that considerable reduction had taken place.

and two phases were characterized with EM/PXRD. Authors also suggest that $\ce{W3O8}$ can hardly be obtained under ambient conditions: 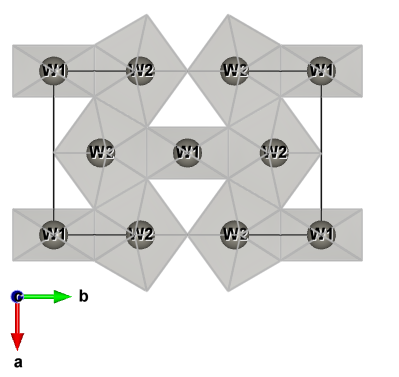 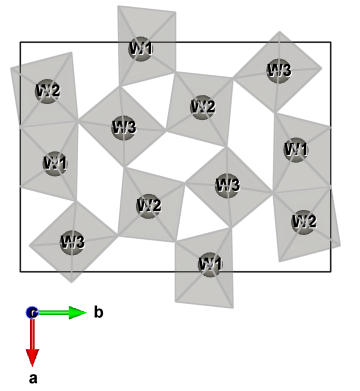 So, there are two possible combinations for the formal $\text{O.N.}$s:

Unfortunately, oxidation states are not mentioned in the article and I haven't found any citeable sources with the determination of oxidation numbers for $\ce{W3O8}$, but the XPS studies of uranium octaoxide $\ce{U3O8}$ indicated the presence of two oxidation states, $\ce{U(VI)}$ and $\ce{U(V)}$, in a $1:2$ ratio, respectively. Since phase $\ce{W3O8(I)}$ is isostructural, there is a high chance that the scenario 1, $1~\ce{W(VI)} + 2~\ce{W(V)}$, is quite plausible.

4
Fractional index in a chemical formula of metal oxide