In mt book I saw these two reactions: 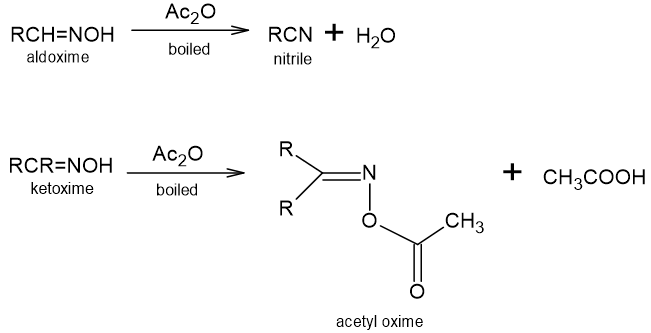 I don't know what is the mechanism for these reactions & that's why I am unable to understand how these products are formed & why they are so different. Please explain the mechanism in detail.

This might sound obvious, but since the reagent and the reaction conditions are identical, the reason for the different outcome of the reactions must be related to the starting materials.

In the case of the aldoxime, the carbon atom of the former $\ce{CHO}$ group still bears a hydrogen atom.

Together with the $\ce{OH}$ group on the adjacent nitrogen atom, this allows (formally) for the elimination of water from the aldoxime under suitable conditions. High temperatures and the presence of a dehydrating agent facilitate exactly that.

The formation of a nitile from an aldoxime in boiling acetic anhydride is (formally) a dehydration reaction.

For obvious reacons, this pathway is not possible in the case of the ketoxime.

What is the role of acetic anhydride here?

I mentioned that the formation of nitriles from aldoximes is formally a dehydration. In reality, however, it is more likely that acetic anhydride actually reacts with both oximes.

acylated. For the ketoxime (R' = alkyl), the story ends here. In the case of the aldoxime (R' = H), a subsequent elimination (of acetic acid) eventually furnishes the nitrile.

3
Reaction of haloalkane with hydroxide ions
12
Why isn't 4-hydroxybenzoic acid formed along with salicylic acid in Kolbe's reaction?
16
Difference between intermediates and transition states
2
Reaction of ethylacetoacetate with Iodine
13
Gattermann-Koch Reaction with Phenol Substrates
2
Deciding the major product in this Wurtz reaction
7
Bromination of Phenylacetone
2
Reaction of primary nitroalkane with nitrous acid