How to perform a total synthesis on paper ? (Think before to make it in lab)

I studied organics chemistry during five years. All those years I just made reactions to made them, the only moments where I had to perform a synthesis on paper was during exams or exercises but all steps were given. So, even if, it was very interesting, there were no really fun to apply all this knowledge to think about the synthesis of a molecule. Obviouly with all these lessons I'm not that bad and I'm able to do a little bit of retrosynthesis.

However I know that total synthesis of natural origin molecules is perform a lot for some decades, we can find a lot of examples here, and sometimes it looks pretty weird to think that human people were able to think on how to make a synthesis in more than twenty steps.

For example, the weirdest synthesis I found, is the synthsis of Azadirachtin "only" perform in $79$ steps. That is abosolutely insane. 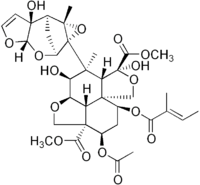 I'm wondering, for every molecules in general, how do chemist do to think about the retrosynthesis of such big molecules which contain in general a lot of stereocenters which then add more difficulties? I mean without to use a computer, is there some rules, such like theorems in mathematics, to think in the best possible way? Because with a bit of luck for $79$ steps at $90$% yield it makes a final yield of $0.024$%...

Retrosynthesis, the way to determine which cuts to make and which steps to use in which order (at least in the general picture), is an art. It is not a science or a craft, it is an art. You learn it by doing it and there is only so much you can get taught by others.

Recently, a multi-group seminar I attended started a ‘molecule of the month’ challenge. We were given a molecule and divided into groups. Each group then had about six weeks to come up with a total synthesis plan, find literature precedence or good arguments for all steps and then present it. Our basic strategy was to draw substructures into SciFinder and rely heavily on its reaction search functionality. With more experience and having read more synthetic journal articles, we probably would have known what we would want to go for.

Finally, I feel like adding that sometimes it is not the molecule whose total synthesis you are publishing that piques your interest. There are also those that primarily do method development and then try to find out ‘which molecule could be a good target for the new and super-cool method I just established?’ Thereafter, the synthesis is modelled to fit the desired novel key step. This paragraph is just to show an alternative approach to total synthesis.

15
Can recent developments improve the total synthesis of B-12?
10
Explain the formation of replicators to a layman
2
How to create the total reaction out of the two steps behind denitrification?
0
Transesterification of vegetable oils to produce biofuels - problems in the lab
1
How to make elemental silicon?