Aren't alpha halo carbonyl compounds extremely fast and reactive via $S_N2$ (the fastest i guess)? If this is so, why isn't the major product in the Favorskii rearrangement an alpha hydroxy carbonyl compound?

And if the alpha carbon(to which the halide is attached) is tertiary, there should be a high chance of an elimination product via $E_2$ (leading to the formation of alpha beta unsaturated carbonyl), right?

This is an old question, but in case anyone comes down this road...

And if the alpha carbon(to which the halide is attached) is tertiary, there should be a high chance of an elimination product via E 2 (leading to the formation of alpha beta unsaturated carbonyl), right?

No, you want to remove hydrogen D in the diagram below. Hydrogen D is much less acidic than hyrdrogen A because removal of the latter results in a resonance stabilized carbanion. The difference in acidity between hydrogens A and D is so large that effectively only hydrogen A will be removed by a nucleophile.

These two arguments effectively eliminate pathways C and D from consideration. Pathway B is simply an equilibrium that goes nowhere, so it has no real effect on the outcome of the reaction. This leaves pathway A, the Favorskii reaction, as the only viable alternative. Pathway A, besides being the only game in town, is actually favored by two factors, 1) as noted above, hydrogen A is acidic and it's removal produces a resonance stabilized carbanion, and 2) completion of the Favorskii reaction is strongly favored by entropic factors since the carbanion and the C-Cl carbon are contained in the same molecule and held relatively close together. 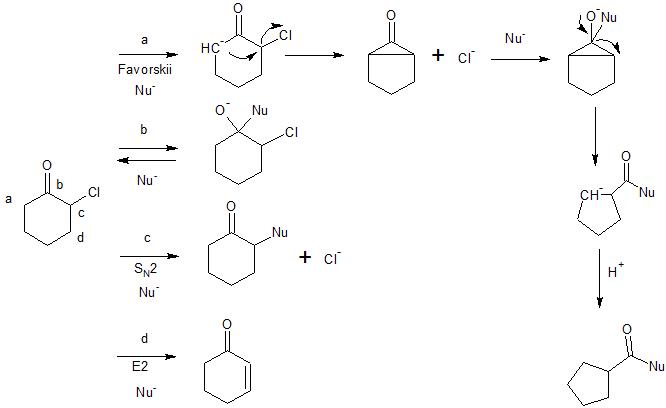 In extension to ron's answer, there are two reasons, why I think a $\ce{S_{N}2}$ reaction is unlikely to occur.