What is “dancing resonance”?

While searching the Internet for information about the tricyclopropylmethyl carbocation, I found a site (askiitians.com) where it said that its stability was due to "dancing (superfast) resonance".

What is "dancing resonance"? How does it take place, and what are the prerequisites for it?

Resonance is not ‘dancing’. Resonance is often confused by undergraduates (and sometimes even professors) as some kind of oscillation back and forth between multiple structures. That is not the case.

When explained properly, resonance is a consequence of our unability to draw adequate depictions of what the bonding situation in the molecule truly looks like. For example, take a benzene ring. We can only draw single and double bonds. The structures should be identical whether the double bonds are in 1,3,5 or 2,4,6 positions. Our depictions predict different structures because double bonds are shorter than single ones. The actual benzene structure, however, has equal bond lengths between all carbons which could be described as 1.5-bonds. It is incorrect to think of the double bonds resonating between 1,3,5 and 2,4,6; rather, both depictions should be considered two extreme pictures that by themselves cannot capture the truth.

This may be relatively easily understood in simple cases such as benzene or the cycloheptatrienyl cation where the resonance depictions are all very similar. It is a lot harder to understand it in the case of a cation such as the tricyclopropylmethyl cation. There are a number of answers here explaining exactly which resonating forms stabilise it; it can and should also be seen as a nonclassical cation of the pentavalent carbonium type. You can, for example, check this question.

Although the above post is right about the misconceptions of resonance, dancing resonance also known as sigma resonance, seems to explain the stability of tricyclopropylmethyl carbocation as the result of increased p orbital character due to the $\mathrm{sp^3}$ bond angle in the cyclic compound being lesser than the theoretical 109.5°. This further pushes the pi electron cloud into the $\mathrm{sp^2}$ hybrid orbital, stabilizing the structure. Although I am unaware the exact explanation for the increased stability, this seems to be a theoretical explanation. 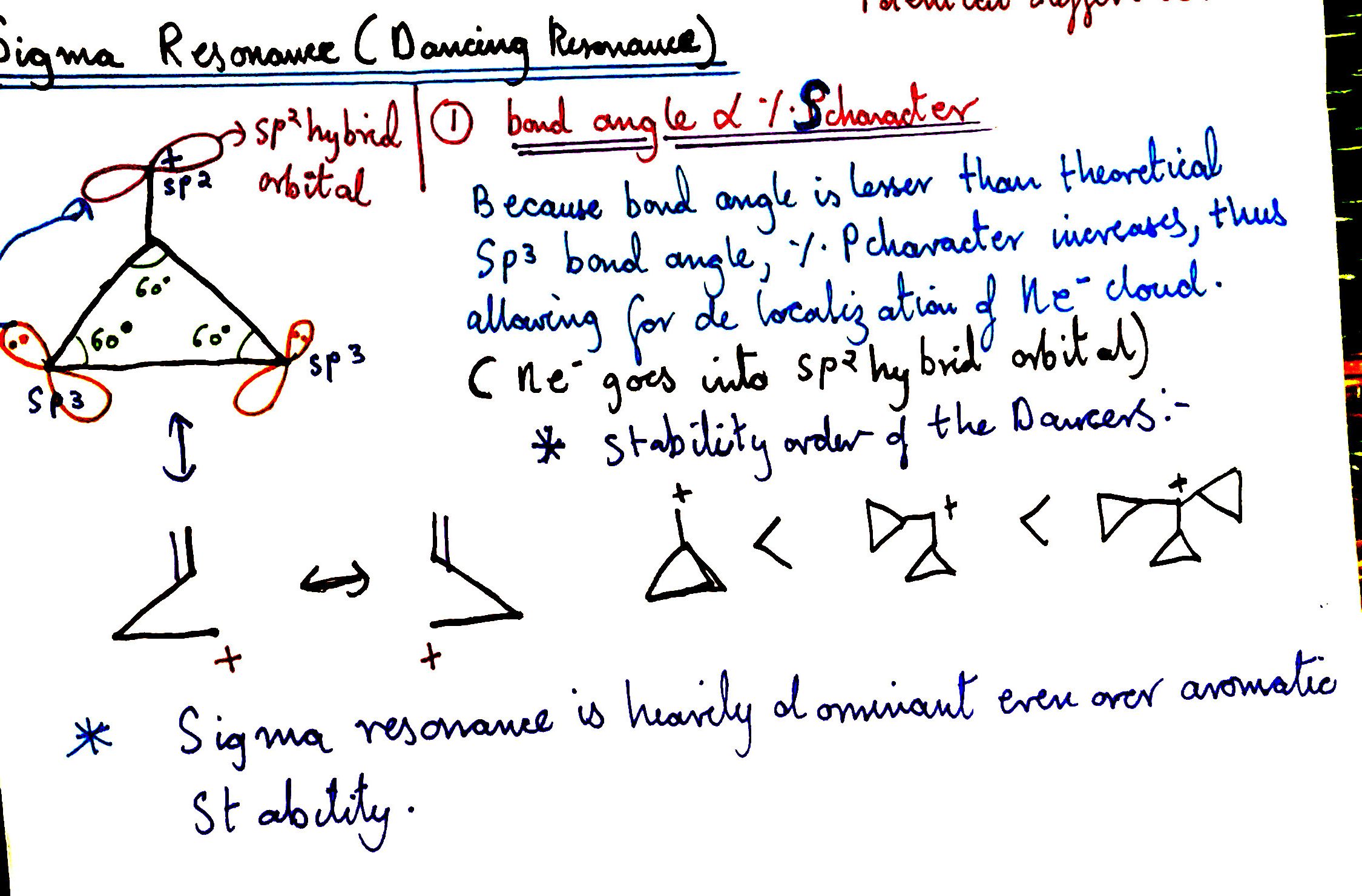 2
Is acetate a weak base due to its resonance structure?
23
Why are vinylic and arylic carbocations highly unstable?
12
Why is the original Pauling's theory of resonance that uses superposition of wavefunctions not used today?
14
What is the mechanism of the Clemmensen reduction?
2
Comparison of Resonance Energies of some Carbocations
1
Does 2-chloro-1,3-dinitrobenzene show resonance?