Is molarity an intensive property?

$$\mathrm{molarity} = \frac{\text{amount of solute}}{\text{volume of solution}} $$ and amount of substance is based on quantity (larger mass means larger amount), so how come it is an intensive property. Shouldn't it be an extensive property?

Concentration is an intensive property. The value of the property does not change with scale. Let me give you an example:

The concentration is the ratio of sodium carbonate to the total mass of the solution, which does not change if you are dealing with the entire 1143 g of the solution or if you dispense some of that solution into another vessel.

If you dispense 11.7 g of that solution into a flask for a reaction, what is the concentration of sodium carbonate in that flask? 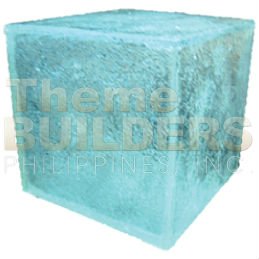 Break the ice block shown in the picture into two equal halves.Now I hope you would be able to answer the following questions:
1.What are the physical properties of ice block which got halved?
Absolutely mass,volume,etc.(These are all extensive properties.)
2.What are the physical properties of ice block which remained same?
Density,etc.(These are all intensive property.)
If you have the doubt so as to why the density remained same,here is the explanation:
I hope you know basically even if block got halved,mass per unit volume remains the same in either of the pieces.All the way it mean that density remained the same(mass per unit volume).Thus it is an intensive property.
Similarly if you imagine solution instead of ice block,you will find that molarity remains the same even if you divide solution into two equal halves.Thus molarity is a intensive property.

0
How do I determine molality from mole fraction without knowing how much of the solution I have?

4
Why is the volume in this compress gas cylinder constant throughout?
8
Entropy change in an adiabatic expansion
2
How to calculate the amount of water produced by the incomplete combustion of propane?
11
Relation between constant-pressure and constant-volume heat capacities: Cp - Cv = nR
0
Is heat an extensive or intensive property?
2
Intensive and Extensive Properties--Resistance
2
Energy absorbed by a system in isothermic process in which the phase changes from liquid to gas
1
Euler's Theorem and Extensive properties