Why and how carboxylate ion has greater stability than carboxylic acid?

I found it written in my textbook. I think it's a misprint, I can't think of any logic behind this statement.

I've only learned that ion is less stable specie so carboxylate ion cannot be more stable than carboxylic acid.

First of all, it would have been clearer if it's a misprint or not if you had attached a screenshot of the wording in your textbook (you still can).

At any rate, the subject of stability of carboxylic acids and carboxylate anions usually arises when discussing the level of acidity or in other words, the strength of the acid. It is pointed out in most organic chemistry books (where electron delocalization is explained) that electron delocalization or resonance is a concept that contributes to a certain structure's stability. That is to say, when a negative charge can be delocalized over several atoms (as is the case with a carboxylate group), instead of being localized on a single atom (as is the case with an alkoxide group), it is considered more stable energetically. (see here, section B - Resonance).

The relative stability of the carboxylate anion means that a carboxylic acid will favor (again, due to energetic considerations) the release of a proton in a basic environment (this is important, since in an acidic environment, the equilibrium will shift towards the acid, and much less carboxylate will exist in the solution), since the conjugate base (the carboxylate anion) is relatively stable, and therefore can exist in the solution in this form. 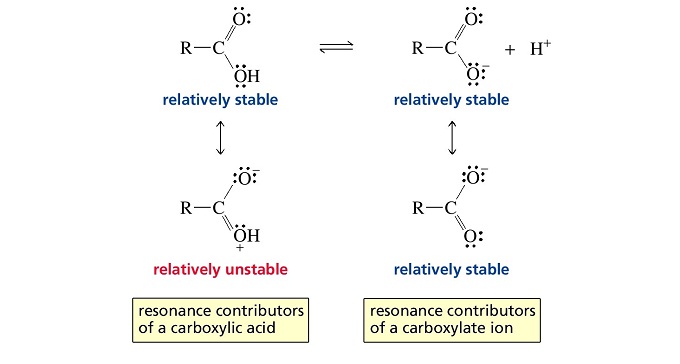 a. There is a base to take a proton (be it a hydroxide ion, an aminic group or any other H+ acceptor).

b. The carboxylic group will release the proton rather easily, because what's left (the carboxylate anion) is relatively stable due to electron delocalization.

A carboxylate is certainly less stable than the corresponding carboxylic acid. the two conjugate forms are related by the equilibrium:

I think of this (and equilibria in general) as a tug of war, or a see-saw; the total amount of $\ce{RCOOH + RCOO-}$ is fixed, but one form can become more plentiful at the expense of the other. The molecule will found mostly in whichever of the two forms is more stable.

Thus, we might draw the conclusion that the neutral $\ce{RCOOH}$ carboxylic acid is more stable than the anionic $\ce{RCOO^-}$carboxylate (at neutral pH and in a standard temperature range). This is directly related to, and in a way the very cause of, the fact that carboxylic acids do not fully dissociate, i.e. they are weak acids.

Not the answer you're looking for? Browse other questions tagged organic-chemistry homework carbonyl-compounds stability or ask your own question.