I am trying to understand this quote in a section on "Biotransformations of Organic Molecules" from a handbook I am reading:

[...] Euglena gracilis could convert acetophenone to 2-phenylethanol; however, its enantioexcess is very poor (10%) (Takahashi, 1994).

What does "enantioexcess" mean in this context? Neither of those molecules are chiral, right? I cannot spot any asymmetric C atoms. Nor any higher order symmetries.

I looked up Wikipedia entries on both molecules and neither mention any d / l isomers.

The Ph.D. thesis that is cited is probably near-impossible to obtain and may very well be in Japanese, which certainly doesn't help.

2-Phenylethanol is not a chiral compound, so as Ivan pointed out, the concept of enantiomeric excess (ee) makes no sense. The fact that the direct reduction product of acetophenone (e.g. via hydride transfer) is 1-phenylethanol strongly suggests that this is nothing more than a typo. However, I thought that it might be fun to go to great lengths to verify the applicability of Occam's razor to this situation.

A SciFinder search for "acetophenone Euglena gracilis" did throw up one Chinese patent, CN 103757061. There is a translation on Google Patents. The patent describes the reduction of various prochiral ketones with various microphytes (also known as microalgae) to form chiral alcohols, with near-perfect enantioselectivity.

I managed to figure out the technical terms in the patent. E. gracilis in Chinese appears to be 纤细裸藻 (xian1 xi4 luo3 zao3). Acetophenone is 苯乙酮 (ben3 yi3 tong2). The patent does not, in fact, describe the reduction of acetophenone by E. gracilis, and the text in Table 2 is so small that I cannot quite make out what compounds they tested (they seem to be aliphatic). Perhaps they simply did not include this combination in the patent if the enantioselectivity they obtained was very low.

This is supported by Figure 1 in the patent. I have scribbled some loose translations. In hindsight I think "Photosystem" should be "Light-harvesting complex". The text translates to "Light-harvesting system" which is a bit of a mix and match of the two, so I wasn't sure what to go for. 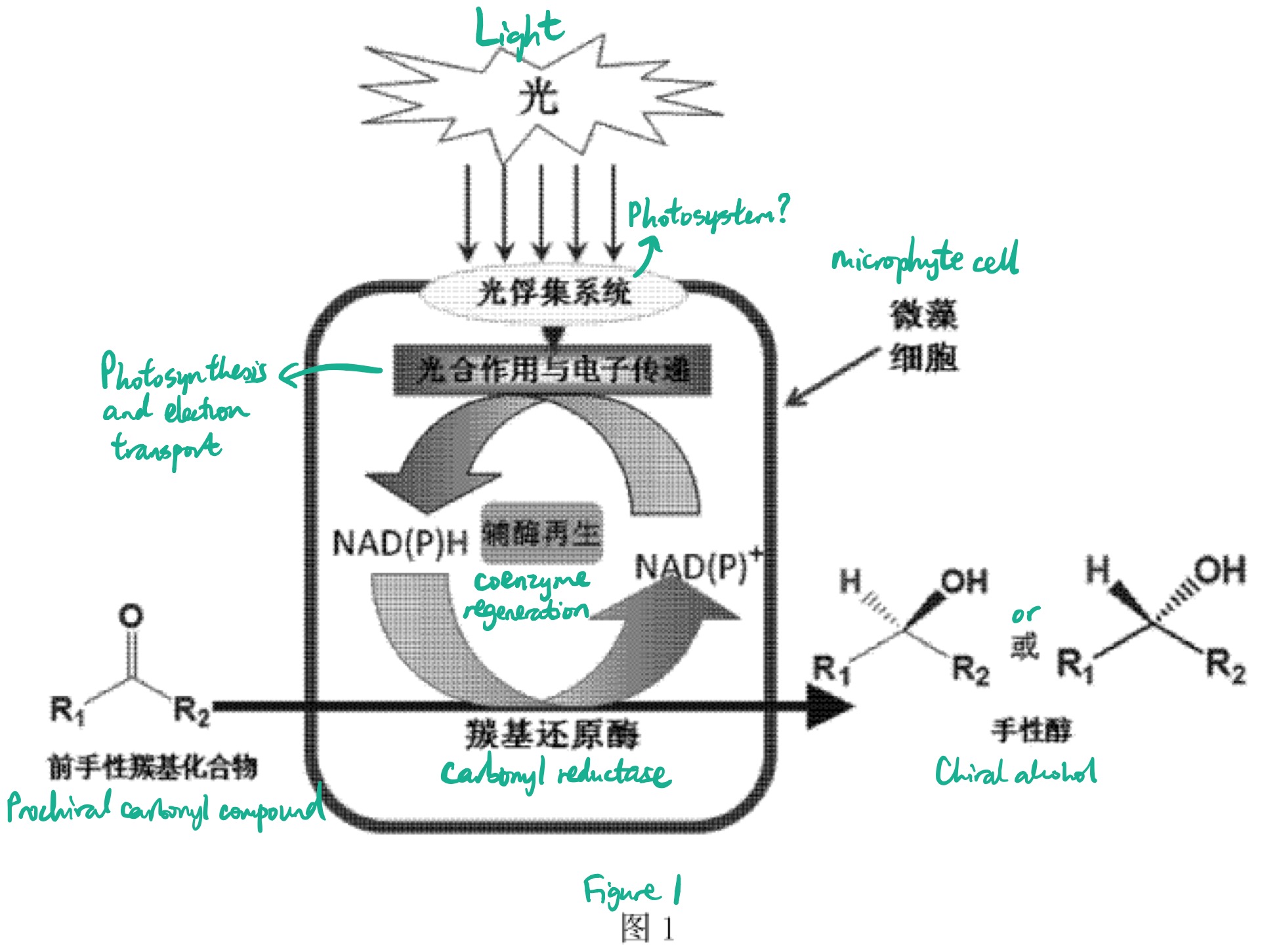 In conclusion, I would therefore assume with confidence that the handbook contains a typo and the authors meant 1-phenylethanol.

(On a side note, the Chinese also got >95% ee for all their acetophenone reductions, go figure...)

Not the answer you're looking for? Browse other questions tagged organic-chemistry biochemistry chirality erratum or ask your own question.

3
How can it be proved that (S)-bis-[2-(t-butylsulfinyl)phenyl] diselenide is a chiral non-racemic product?
0
Is it possible to generalize whether an organic molecule is chiral or not?
14
Configuration of chiral center in cocaine
0
Are bi-cycles chiral molecules?
10
If a chiral molecule reacts with an achiral molecule will the product be chiral or achiral?
13
What are the criteria for a molecule to be chiral?