Derivation of the Orgel diagram for octahedral d2 complexes

The Orgel diagram for a typical octahedral $\mathrm{d^2}$ complex is shown below: 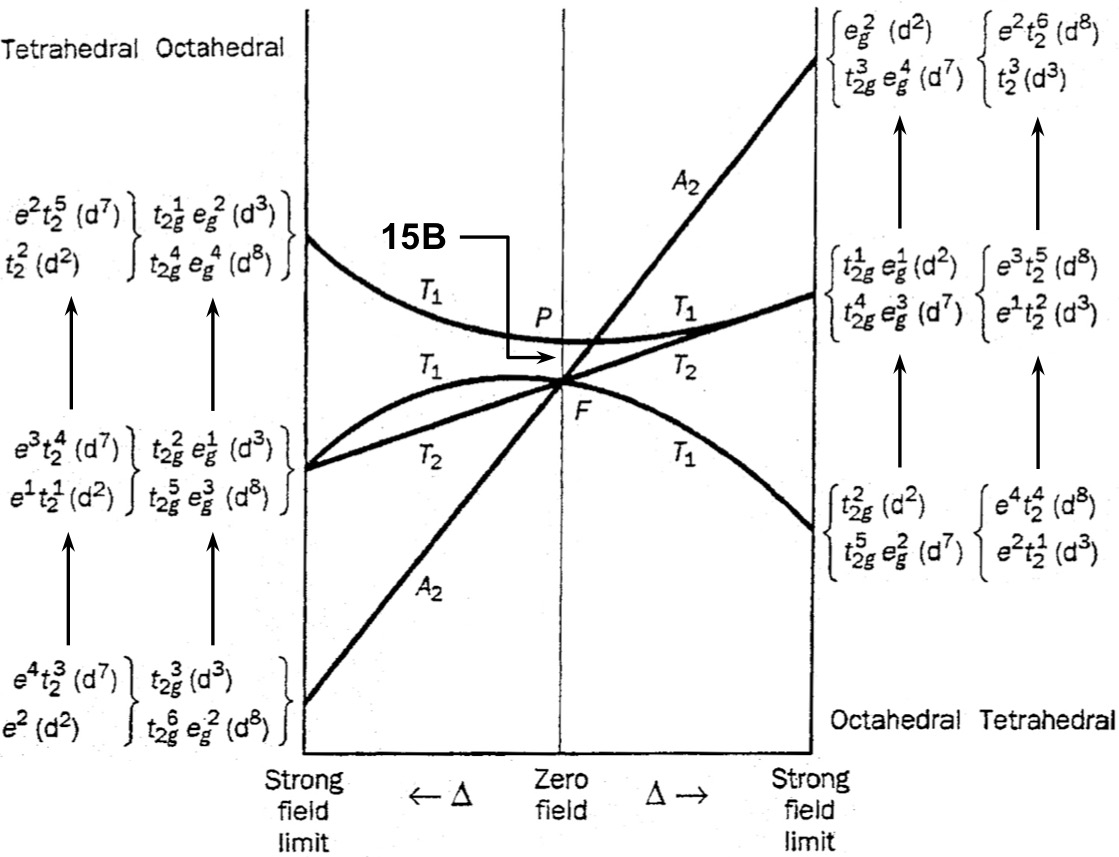 I understand that the right-hand half of the graph shows how the energies of electronic states of a $\mathrm{d^2}$ complex vary with the ligand field splitting $\Delta$.

However, neither the Wikipedia page nor the LibreTexts (formerly UC Davis ChemWiki) page are helpful in describing how this diagram is constructed. In particular, I have a few questions:

I will adopt the description used in Figgis and Hitchman's Ligand Field Theory and Its Applications (p 5), because I cannot really phrase it better:

It is useful to recognise the relative importance of the terms in the Hamiltonian for different systems:

Spin-orbit coupling (which scales as $Z^4$, $Z$ being the atomic number) plays a nonzero, but relatively small, role in the properties of the 3d or 4d transition metals (compared to the 5d, 4f, or 5f metals). Therefore, it is not reflected in the Orgel diagrams above.

The strong-field limit simply refers to the opposite case, i.e. $\mathbf{H}_\mathrm{LF} > \mathbf{H}_\mathrm{ER}$. In this regime, the electron-electron repulsions are relatively small compared to the ligand-field splitting $\Delta$. As such, the electronic states are entirely determined by the electronic configuration $(\mathrm{t_{2g}})^m(\mathrm{e_g})^n$ (for a $\mathrm{d^2}$ complex ion, clearly $m + n = 2$).

2. The electronic states: their symmetries and their energies

For a $\mathrm{d^2}$ configuration, one can either enumerate microstates (a nasty, tedious method that I do not recommend), or one can use group theory (wait for the MathJax to load, then scroll to direct product tables: $R_3$). The wavefunction of a d-orbital, in the spherical symmetry of the free ion, transforms as $D \equiv \Gamma^{(2)}$. The electronic wavefunction of two d-electrons transforms as the direct product of $D$ with itself:

The singlet states are higher in energy due to exchange energy (Hund's first rule). As such, they get ignored in our treatment here. This is not always wise, and the more sophisticated Tanabe-Sugano diagrams do plot electronic states of different multiplicity, but as far as we are concerned, we can neglect them here.

The difference in energy between these two states is solely attributable to electron-electron repulsions.[1] The two states are separated by an energy difference $15B$, where $B$ is a Racah parameter that acts as a measure of electron-electron repulsions. I believe there is a quantum mechanical expression for it, but in practice the value of $B$ is empirically obtained (via Tanabe-Sugano diagrams). It is easier to treat it as an empirical parameter that is experimentally obtained, similar to how one would treat the ligand-field splitting $\Delta$.

The free-ion terms and the difference in energy $15B$ are shown in the middle of the diagram, where $\Delta = 0$.

In an octahedral $\mathrm{d^2}$ complex, there are three ways of arranging the two d electrons: $\mathrm{(t_{2g})^2}$; $\mathrm{(t_{2g})^1(e_g)^1}$; and $\mathrm{(e_g)^2}$. These are the three electronic states under consideration and are what you see at the right-hand side of the diagram. Hopefully the energy ordering is straightforward; the energy gap between each state is equal to $\Delta$ since it requires promotion of one electron from $\mathrm{t_{2g}}$ to $ \mathrm{e_g}$.

As can be seen from the Orgel diagram, there are four states: two $\mathrm{T_{1g}}$ states, one $\mathrm{T_{2g}}$ state, and one $\mathrm{A_{2g}}$ state. (The subscript g, as well as the spin multiplicity, are omitted in the diagram. This is to allow it to be generalised to tetrahedral complexes, where the g/u labels are not applicable, as well as complexes with other d-electron counts, where the spin multiplicity will be different but the symmetries the same.) The question we will have to look at is how these states are obtained, and how they correlate with the two extreme limits described earlier.

Going from the free ion limit, we need to find out what happens to $\mathrm{F}$ and $\mathrm{P}$ terms when the symmetry of the compound is reduced from spherical to octahedral. Luckily, there are group theory tables that do just that, called tables of descent in symmetry. These tell us that:

Now, we need to figure out which final configurations to join them to. This is done by taking more direct products (yes, group theory tables again). For the $\mathrm{(t_{2g})^2}$ configuration we have

however since we are only interested in the triplet states, we are only going to take the $\mathrm{T_1}$ term, which has an antisymmetric spatial component to go with the symmetric triplet spin component. Likewise

Incidentally, this is also why the two $\mathrm{T_1}$ electronic states have curved lines: quantum mechanical mixing introduces an extra perturbation to the energy. The upper energy level is always pushed upwards, and the lower energy level pushed downwards, which leads to the curvature shown in the diagram. The other two states do not have such effects and are therefore depicted as straight lines.

3. Other geometries and configurations

Furthermore, the octahedral $\mathrm{d^3}$ configuration can be thought of as having two holes in a spherically symmetric $\mathrm{(t_{2g})^3(e_g)^2}$ arrangement. These holes give rise to exactly the same symmetry states as the $\mathrm{d^2}$ configuration; however, since holes are essentially "negative electrons", the relative energies are reversed. For example, the $\mathrm{A_2}$ state, which arises from placing the two holes in the $\mathrm{e_g}$ orbitals (i.e. a $\mathrm{(t_{2g})^3}$ electronic configuration), is actually the ground state instead of the highest excited state. This is reflected in the left half of the diagram.

(If the above two paragraphs were confusing, they were covered in more detail in another answer of mine: How do I find the ground state term symbol for transition metal complexes?)

[1] Quoting myself from another answer

[3] The Hamiltonian $\hat{H}$ transforms as the totally symmetric irreducible representation of the relevant point group (which makes sense, since the energy of a system has to be constant under reflection, inversion, rotation, etc.). Consequently, the matrix element $\mathbf{H}_{mn} = \langle m | \hat{H} | n \rangle \neq 0$ if $m$ and $n$ have the same symmetry. This directly leads to the non-crossing rule, that energy levels corresponding to wavefunctions with the same symmetry do not cross under any strength of a perturbation (in this case, the ligand field).

Not the answer you're looking for? Browse other questions tagged inorganic-chemistry spectroscopy coordination-compounds transition-metals symmetry or ask your own question.

25
What is the physical basis for Hund's first rule?
14
Why do rare earth metal oxides vary in color so much?
10
How do I find the ground state term symbol for transition metal complexes?
5
What is meant by 'electrons of like/unlike rotation'?

2
Deducing orbital degeneracy in geometries apart from octahedral or tetrahedral
8
Identifying the C3, C4, S4, and S6 symmetry operations in the Oh point group
15
Why is anhydrous copper(II) sulfate white while the pentahydrate is blue, even though both have one unpaired electron?
24
Theoretical basis behind orbital correlation diagram for pericyclic reactions
4
Is cobalt(II) in the hexaamminecobalt(II) complex high spin or low spin?
4
Second order Jahn-Teller effect for d0 complexes