How to determine whether a organic compound is diamagnetic or not?

I have faced several questions regarding the diamagnetic behaviour of certain organic compounds. I know that one has to check the electronic configuration of the atoms in the compound and see if there is an unpaired electron or not? Of all aromatic compounds (benzene, cyclopropene cation, cyclopentene anion) that I have come across one thing was common they were all diamagnetic. I have the following question in my mind 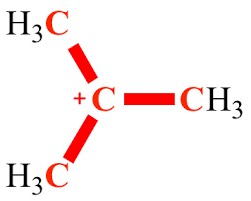 The above is the structure of tertiary butyl cation. It is clear that if we consider the electronic configuration of the central carbon it is $1s^{2}2s^{2}2p^{1}$.So it must be paramagnetic. This is where my confusion is.

If all the electrons are spin paired then the molecule will be in a singlet state$^*$ and will be diamagnetic, if they are not so paired then it will be will be paramagnetic. The rules are the same whether or not the molecule is 'organic'.

Most 'normal' organic compounds, e.g. methane, benzene, etc. have paired electrons in each of the orbitals from the lowest one to the highest occupied one (HOMO), and thus are diamagnetic. The orbitals including the LUMO and up are unoccupied.

Radicals such as $\ce{CH3\cdot}$ have an unpaired electron (doublet state) and so are paramagnetic.

If a biradical is formed e.g. carbenes (see IUPAC Gold Book 'biradical' for an example structure) then it will depend upon whether the spins are paired in a singlet state (diamagnetic) or parallel as in a triplet state which will be paramagnetic. Often singlet and triplets are close in energy with the triplet being lowest. Similarly, dioxygen has two unpaired electrons and forms a triplet ground state so is paramagnetic. Nitric oxide has one unpaired electron and is paramagnetic.

If a molecule is put into an electronically excited state by absorbing a photon then both singlet and triplet states can be produced, however, theses are short lived and decay back to the ground state.

I see your point of confusion!

The above is the structure of tertiary butyl cation. It is clear that if we consider the electronic configuration of the central carbon it is $\mathrm{1s^2\,2s^2\,2p^1}$.

Well yes but no. Remember that you don’t have a lone atom in space but a carbon bound to three other atoms. These three σ bonds must originate from three orbitals pointing towards these three atoms. If we assume the electronic configuration to start off as (emphasis important) $\mathrm{2s^2\,2p^1}$, we cannot form three bonds, we only have one ‘ready’ orbital.

Therefore, this atom hybridises — or so our simplified view of the world. We mix the $\mathrm{2s}$ and two $\mathrm{2p}$ orbitals to give three $\mathrm{sp^2}$ hybrid orbitals. These now nicely align in $120^\circ$ angles and in one plane and are ready to bond to three other carbons.

There is a fourth p orbital on carbon. It remains there as a p orbital in the final structure. The three electrons we had are delivered into the three $\mathrm{sp^2}$ orbitals; thus the final $\mathrm{p}_z$ orbital is empty; completely electron-free.

Each of the electrons in the $\mathrm{sp^2}$ orbitals is paired up as a result of forming the σ bond. Therefore, there are no unpaired electrons in the tert-butyl cation and the species is diamagnetic.

You can add an electron into the $\mathrm{p}_z$ orbital to get a paramagnetic compound. Since you added an electron from the tert-butyl cation to arrive there, you no longer have a cation. Instead, you have created the tert-butyl radical. The electronic configuration from above would end in $\mathrm{2p^1}$.

Whenever you see the word radical, you can strongly assume that you have unpaired electrons. If you do not see it, you very likely have a diamagnetic organic molecule.

Note that NMR spectroscopy is intensely popular in organic chemistry. Because it bases on magnetic fields (and resonance therewith), it doesn’t really work with paramagnetic compounds. But more than $99.999~\%$ of known organic molecules have an NMR spectrum published.

Not the answer you're looking for? Browse other questions tagged organic-chemistry magnetism or ask your own question.

3
Diamagnetism in sulfur
2
Electron density in benzene ring
3
What atom is always paramagnetic and why?
1
Is [PdCl2(PMe3)2] diamagnetic or paramagnetic?
2
Which ion has a greater paramagnetic property?