Why are there 14 electrons in the third shell of iron atom? 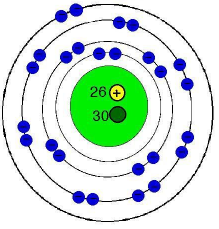 Its not necessary that 3rd shell has to have 18 electrons for 4th shell filling up to start. The electron filling depends upon the energy levels of the orbitals. Lower energy orbitals get filled up first.

The third shell must contain at least 18 electrons.

This statement is wrong. In fact, the third shell is only able to contain up to 18 electrons. This is a mathematical result of quantum chemistry that is, in principle, derived in every introductory quantum chemistry course. The reason being that there are three different subshells in the third shell (called s, p and d orbitals) which can contain 2, 6 and 10 electrons, respectively. After 18 electrons have been added to the third shell, there is no combination of quantum numbers to allow for a 19th electron within that same shell.

On to the question of why there are two electrons in the 4s orbitals (the fourth shell) although the third shell is not full yet. This is because the subshells in every atom with more than one electron have different energy levels. In general, the energy levels follow what is known as the aufbau principle: 1s, 2s, 2p, 3s, 3p, 4s, 3d, 4p, 5s, 4d, 5p, 6s, 4f, 5d, 6p, … However, this is more of a general observation. It works very well for general chemistry classes, but there are quite a number of edgy cases that these same classes will have to introduce special rules for.

A great general reference to check out would be this question. But I would also like to point you to this chemguide.co.uk guide, which explains the entire complication in more details. The gist is that the energy levels of 4s and 3d are so similar in an innocent case such as argon that depending on how many protons and additional electrons are added a different orbital may be the one lower in energy and leading to the more stable electronic configuration.

If, when coming from argon you add exactly one proton and exactly one electron (generating a potassium atom), the energy levels will shift relatively to each other in such a way that the 4s orbital is lower; thus, potassium’s electronic configuration is $\ce{[Ar] 4s^1}$. If you add another proton without an electron (generating $\ce{Ca+}$), the picture remains the same. Calcium(I) has the same electronic configuration. If you add a third proton to generate scandium(II) ($\ce{Sc^2+}$), the 3d orbitals will suddenly move below the 4s orbitals in energy so its configuration is $\ce{[Ar] 3d^1}$. (This is because the 3d orbitals are less diffuse or ‘closer to the nucleus’ and therfore get stabilised more.)

If you thought you could now easily add a second electron into another d orbital when generating scandium(I) ($\ce{Sc+}$), think again. Due to electron-electron repulsion (or more generally, the Hund rule), this additional electron is placed in the 4s orbital leading to $\ce{[Ar] 3d^1 4s^1}$. And the final electron to generate a neutral scandium atom would again be added into the 4s orbital to give $\ce{[Ar] 3d^1 4s^2}$.

(In reality, you do not simply ‘add electrons’ and all the electrons of an atom are indistinguishable. What you can do, however, is calculate or measure the electronic structure of all these atoms and ions to determine which levels are populated by how many electrons. And that will give you the result discussed above.)

Tl;dr: It’s complicated, but an easy rule of thumb would be to fill the next shell’s s electrons before filling up a given shell’s d electrons. Thus, for iron the 4s level is filled first, before an additional six d electrons are added. Read above as to why it is not that simple.

66
Why do elements in columns 6 and 11 assume 'abnormal' electron configurations?

0
Lewis dot structures and exceeding the octet
34
What are the maximum number of electrons in each shell?
3
What is meant by complete outer shell? Why do the noble gases have zero valency?
1
Confused about writing out electron configurations
0
How many d-eletrons are in the outer shell of following compounds:
3
Can an element have a third energy shell without completely filling the second energy shell?