Which has more inductive effect: an aldehyde or a carboxylic acid?

A chemistry reference book that I have been reading gives the order of inductive effect ($-I$) as follows: 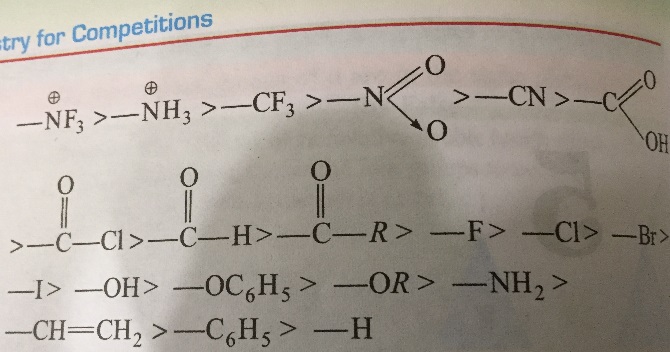 While the Wikipedia page on inductive effect gives the following order:

The reference book has $\ce{COOH}$ ahead of $\ce{CHO}$ but Wikipedia has it the other way around. Which source is correct?

I believe the Wiki page is more accurate, because the Hammett Equation substituent constants (para) indicate -CHO should be more "electron withdrawing" than -COOH, but there is little reason to use such lists as "absolute" - I think they are simply good guidelines for reactivity.

I looked at the data in this link: https://www.bluffton.edu/homepages/facstaff/bergerd/classes/CEM311/handouts/sigmas.pdf

However, substituent constants are not absolute proof of "inductive effect" and it is difficult to conclude from such data that a particular substituent is more "inductively" electron withdrawing than another. To do that, we would need a model (or a set of compounds, equivalently) where we can achieve separability of sigma and pi electrons.

CHO group will have more -I effect than COOH because OH group in COOH group will decrease the charge on the carbonyl C which reduces it's withdrawing effect.

Not the answer you're looking for? Browse other questions tagged organic-chemistry polarity or ask your own question.

3
Inductive effect
6
Which functional group is more polar in a drug: primary amide or a carboxylic acid?
1
Mesomeric Effect and its Strength
1
Order of activating ability in electrophilic aromatic substitutions
1
Order of basicity for arylamines and ammonia in gas phase