I am facing problem in the following question:

What is the order of bond length of $\ce{O-O}$ in the following compounds:

In my view since fluorine is more electronegative than oxygen it will attract the bonded electrons towards itself resulting in low bond length in case of $\ce{O2F2}$ than in case of $\ce{O2Cl2}$. However if the same concept is applied to $\ce{H2O2}$ it should have the greatest $\ce{O-O}$ bond length however my book states it otherwise.

First, let me confirm your answer. The table given below shows a summary of optimised structures of $\ce{XOOX}$ compounds; experimental data when available is in parentheses. As a reference the bond length in $\ce{O2}$ is $121\ \mathrm{pm}$.

Here you can clearly see that $\ce{O2F2}$ has the shortest $\ce{O-O}$ bond length of the three compounds in consideration in the original question. In fact, the fact that it is so close to $\ce{O=O}$ bond length in the dioxygen is suggestive of high double bond character between the two oxygen atoms in dioxygen difluoride. Here's another table summarising the bond order calculations:

Let's study the MO diagram proposed in the paper I am using as a reference for this answer. 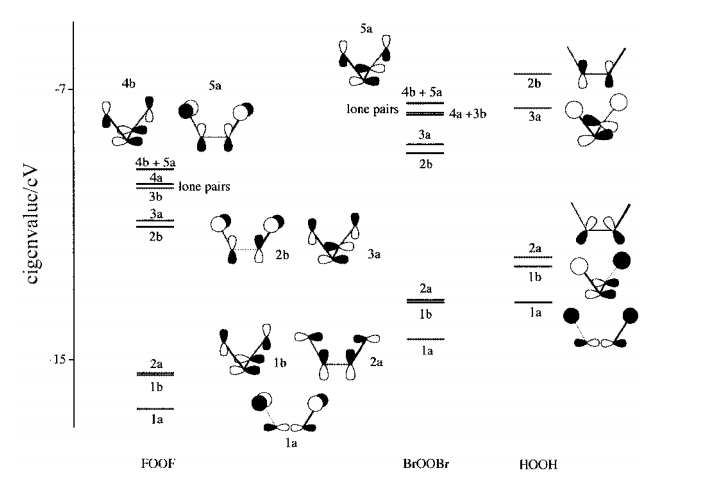 Here, the orbitals of this $C_2$ system have been generated by considering the interaction of the frontier orbitals of $\ce{X ... X}$ with those of the $\ce{O2}$ molecule. In the case of $\ce{H...H}$, they are simply the a + b combinations of the $1s$ functions, and for the halogens they are a combination of their valence p functions.

The orbitals $2b$ and $3a$ derive from the bonding overlap of $\ce{X...X}$ functions with the $\ce{O2}$ $2p\pi_g$ orbitals. Now, addressing the 2b and 3a functions in $\ce{FOOF}$, we note that they are similar to those in $\ce{HOOH}$. However, the high electronegativity of fluorine results in transfer of electron density from oxygen and considerable stabilisation of this $\ce{O–O}$ anti-bonding function.

The 3b and 4a functions in FOOF and BrOOBr are halogen based, non-bonding ‘lone pairs’. The higher electronegativity of fluorine, as outlined above, leads to greater bonding interaction between the $\ce{F}$ $2p$ and $\ce{O2}$ and $2p \pi_u$ functions resulting in the low energy of $2a$ and $1b$.

It similarly leads to the relatively low energy of the corresponding anti-bonding functions which are $4b$ and $5a$ in $\ce{FOOF}$. These are $\ce{F–O}$ anti-bonding but $\ce{O–O}$ bonding. These are the highest occupied orbitals in $\ce{FOOF}$ with the result that the $\ce{F–O}$ bond order is considerably reduced at the cost of the $\ce{O–O}$ bond.

This repulsive interaction is responsible for the long $\ce{F–O}$ bond. There is some bonding interaction with the $2p\sigma_g$ and $2p\pi_g$ functions of $\ce{O2}$. The latter results in a $\ce{O -> F}$ charge transfer and a degree of strengthening of the $\ce{O–O}$ bonds.

In the resonance scheme proposed below, I would, based on this, call attention to resonance form 3.

Anyway, I have made an attempt to summarise the salient features of the discussing in the paper cited below in the reference section. The effects that I have called attention to here, are significant for fluorine but considerably weaker for chlorine, bromine etcetera.

The key to understanding why the bond in $\ce{O2F2}$ has a very high double bond character is the gauche effect. The effect has its name because of the observation that $\ce{O2F2}$ prefers a gauche configuration rather than the expected (due to sterics) anti configuration. The reason is electronic in nature: a lone pair of oxygen A can interact with the $\sigma^*(\ce{O_B-F})$ orbital. This lowers the energy of the populated orbital at the expense of the unpopulated one. Since we have an interaction along $\ce{O_A-O_B}$, this increases the double bond character of the $\ce{O-O}$ bond. At the same time, since we are using the $\sigma^*$ for stabilisation, the $\ce{O-F}$ bond decreases in bond order — it becomes less than a single bond. In Lewis resonance depictions, this can be explained by the following mesomeric structures:

This effect is strongest in $\ce{O2F2}$ since fluorine is more electronegative than oxygen and therefore the $\sigma^*$ orbital has a much higher oxygen contribution.

In hydrogen peroxide, a similar mechanism is at play that also contributes to reducing the bond length and increasing the bond order. In $\ce{Cl2O2}$, the effect is weakest.

Not the answer you're looking for? Browse other questions tagged inorganic-chemistry bond covalent-compounds or ask your own question.

2
OF2 vs O2F2 oxidising strength

8
Why is there only one bond length for sulfur hexafluoride?
3
How to calculate the energy to dissociate a bond into neutral atoms?
3
Comparing bond angles in carbonyl dichloride and carbonyl dibromide
2
Why HBr has stronger attraction between molecules than CH3NH2?
1
Bond Polarity vs bond length's effect on reactivity of haloalkanes