Explain the formation of (1,1,1-triphenylmethyl)methyl ether when a solution of 2,2,2-triphenylethanoic acid in concentrated sulfuric acid is poured in methanol.

I cannot figure out where is one carbon atom lost. Has it escaped as $\ce{CO2}$? Or is there something more strange happening.

I wouldn't call this reaction an esterification. There is no ester functional group in the final compound.

I guess there's some special role of the three phenyl groups but I'm unable to come up with any mechanism. I hope dehydration is involved as one of the reaction steps.

Disclaimer: The question has pretty much been answered in the comments. I'm just making it substantial. 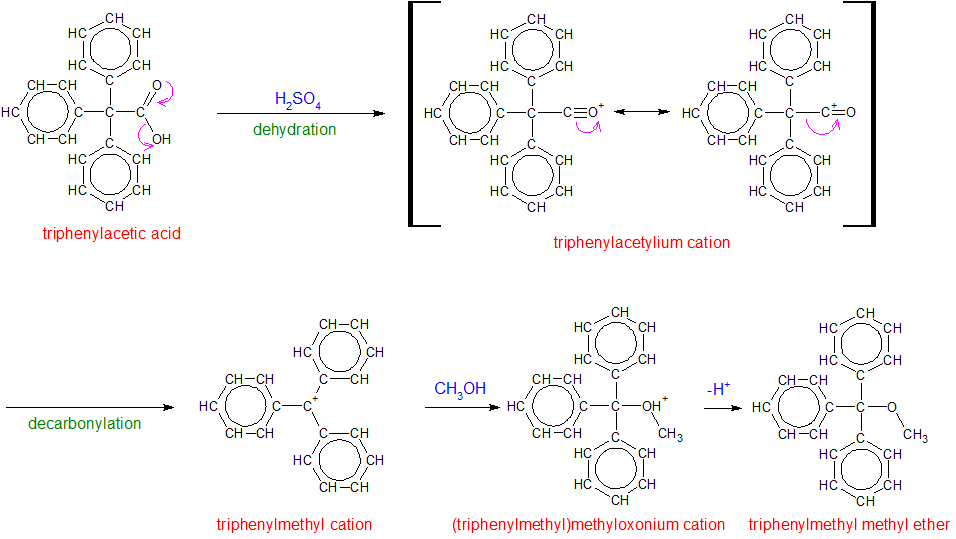 The triphenylacetic acid is dehydrated in the presence of concentrated sulfuric acid to give an acylium ion, namely triphenylacetylium cation, which is stabilized by resonance.

Then, the triphenylacetylium cation undergoes decarbonylation (removal of carbon monoxide) to give triphenylmethyl cation, which is stabilized by the three phenyl groups.

The oxygen in methanol acts as a nucleophile to attack the carbocation, and is deprotonated to give our desired product triphenylmethyl methyl ether.

It is noted that this reaction should be done in a well-ventilated area because of the evolution of toxic carbon monoxide gas.

Not the answer you're looking for? Browse other questions tagged organic-chemistry acid-base reaction-mechanism carbonyl-compounds or ask your own question.

3
How to Determine Acid Strength?
9
Why is benzoic acid a stronger acid than 3-aminobenzoic acid?
0
Mechanism of the reaction of cyclohexanone and nitric acid to form Adipic acid
9
Decarboxylation of Salicylic acid
9
Why does adipic acid give a cyclic ketone on heating while glutaric acid and succinic acid give a cyclic anhydride?
1
Acid Catalysed Ring Expansion – Mechanism?