I am facing trouble with the following problem.

My idea is that the compound possess a plane of symmetry and thus should be achiral. However if we take its mirror image then the bond pointing below of the plane will become above the plane and thus it will not form a nonsuperimposable mirror image indicating that it is chiral. Certainly one of the approach is incorrect. I couldn't understand which one.

The only place where a plane of symmetry may make sense would be vertically through the centre, through the spiro carbon. However, as the image by Tetrahydrocannabinol shows, these rings are not in the same plane (implied by the wedge and dash notation). Therefore, using that plane as a plane of symmetry would map each of the two rings into the void.

The only element of symmetry I can see in the compound is a $C_2$ axis (rotation by $180^\circ$). This axis would also bisect the spiro carbon, but it would map the oxygens onto each other. Having only a $C_2$ axis allows a compound to be chiral (point group $C_2$) and thus your compound is chiral.

The compound is chiral as there is no element of symmetry. The two rings are more or less perpendicular to each other. Something like this: 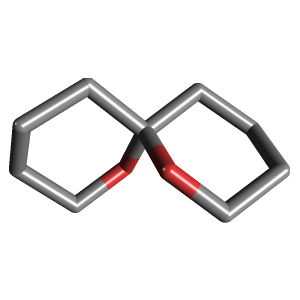 Since it is disymmetric it is chiral.

7
Does an axis of symmetry determine chiralty?
24
Chirality of symmetrically substituted biphenyl
4
Is trans-1,2-dimethylcyclobutane chiral?
1
How are these molecules chiral and achiral?
0
How do we determine molecule chirality in these examples?
3
Is the existence of chirality center equivalent to chiral?
1
Do we need to check for all kinds of symmetry in a compound to declare it achiral?
6
Is (1R,3aR,4S,6aS)‐1,4‐dibromo‐octahydropentalene chiral or achiral?