How to explain shape of molecules in penta and hexa coordination if hybridization involving d-orbitals (in main block) is considered incorrect?

In this answer @Jan says:

penta- and hexacoordination; tetracoordination with additional lone pairs and related: attempt to form as many normal bonds with p orbitals as possible; keep one lone pair in an s orbital if possible. Use remaining p orbitals to construct four-electron-3-centre bonds to the remaining atoms. (Predicted bond angles: diverse. $90^{∘}$ going from 2e-2c bonds to 4e-3c bonds; $180^{∘}$ between a pair of coordinating atoms contributing to the same 4e-3c bond.)

Let us consider $\ce{PCl5}$. According to several books the hybridization in this compound is $\mathrm{sp^3d}$. But @Jan says that pure $d$ orbitals never take part in hybridization in case of main group elements. Okay. So, if we assume that there is no hybridization in $\ce{PCl5}$ then as Jan says we form "as many normal bonds" with $\ce{Cl}$ as possible using $p$ orbitals. Since, $\ce{P}$ has 3 p orbitals we use them to form mutually perpendicular bonds. Suppose they are the top, bottom and leftmost bonds as in the following diagram: 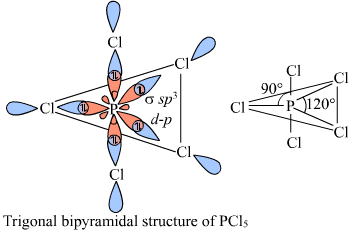 Now, let us consider the $\ce{ClF3}$ example that @Jan gives. If we follow Jan's method we keep one lone pair in a pure $s$ orbital , then the shape can never be trigonal bipyramidal like this:

This is because $s$ orbital is spherical in nature and does not look like a dumbbell shaped $p$ orbital.

Also, could someone please give me some examples in cases of "penta- and hexacoordination; tetracoordination with additional lone pairs", where $3c-4e$ bonds are formed using remaining $p$ orbitals when no hybridization occurs (as mentioned by @Jan) ?

64
Why does F replace the axial bond in PCl5?
34
Hypervalency and the octet rule
29
What is Drago's rule? Does it really exist?
20
How can the Bonding in IF7 be explained using LCAO method?
23
PBP vs TBP geometry?
4
Clarification needed regarding description of molecules without hybridization using pure p orbitals

64
Why does F replace the axial bond in PCl5?
17
How does VB theory explain the Si-O-Si bond angles in SiO2?
11
Hybridization of sulfur in sulfur dioxide
4
Clarification needed regarding description of molecules without hybridization using pure p orbitals
0
When finding hybridisation of atoms, why are double bonds and triple bonds only considered once?
8
Hybridisation of ClO2