The Oh character table has ten symmetry classes. I am trying to identify them, but my stumbling block is in identifying the order of each class.

I will use this diagram as a reference, from Sydney Kettle's Symmetry and Structure: Readable Group Theory for Chemists pg 191 (Wiley, 3rd edition). 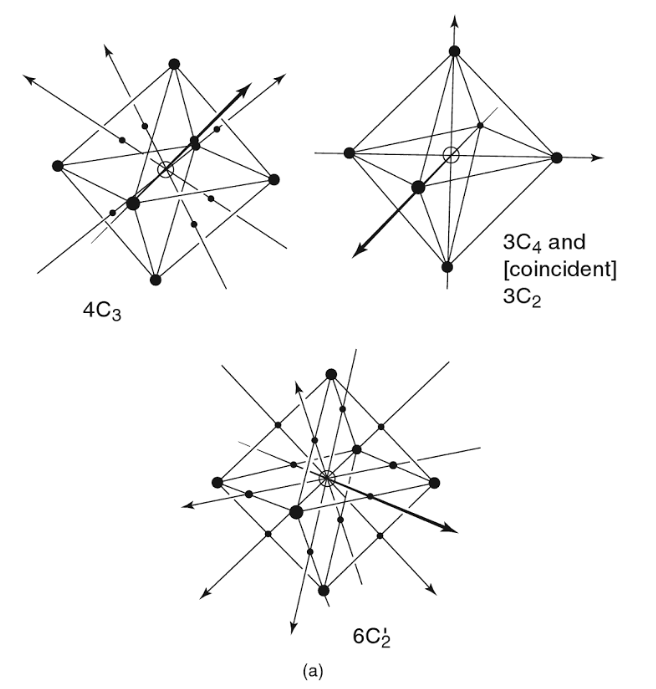 The classes (with their respective orders) for the Oh table are:

The improper rotations are given in another diagram, this time on page 194 from the same book. 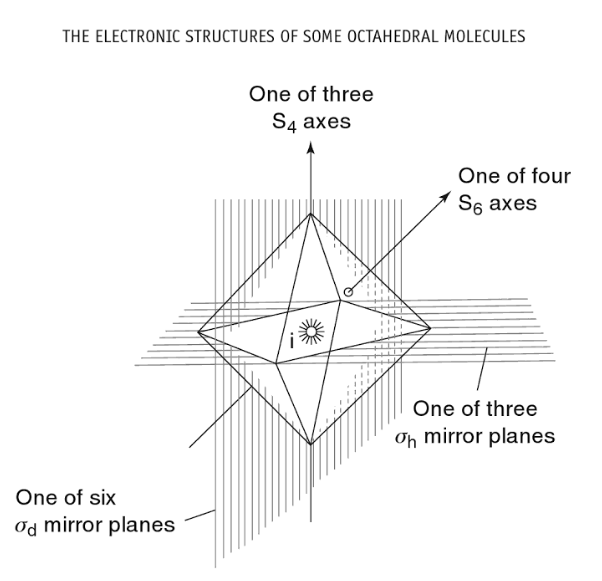 In summary, from 10 total classes in the octahedral table, I can identify all the corresponding axes/planes for 6 of those 10 classes. For the remaining 4 classes, $C_3$, $C_4$, $S_4$, and $S_6$, I can only identify half the axes. At first I thought the character table was counting both positive and negative rotations, but then the order for the $C'_2$ and $C_2$ rotations should be doubled if that were the case ($12C'_2$ and $6C_2$).

At first I thought the character table was counting both positive and negative rotations, but then the order for the $C_2'$ and $C_2$ rotations should be doubled if that were the case ($12C_2'$ and $6C_2$).

You were very close. The missing symmetry operations are indeed ‘positive and negative’ but only those that lead to non-identical transformations. In a $C_2$ axis, it does not matter whether you turn clockwise or counter-clockwise. Consider the following mock-up of the central planar square of an octahedron with the ligands labelled A, B, C and D:

If you apply $C_2$, you will arrive at the same orientation (2), regardless of which direction you rotate in:

However, when rotating by $C_4$ clockwise and counterclockwise actually lead to two different results (3) and (4):

These two are not identical transformations. In fact, they have distinct symbols; depending on your direction of rotation one is $C_4$ and the other is $C_4^3$. You can also interpret them as rotation by $90^\circ$ and rotation by $3 \times 90^\circ = 270^\circ$. $C_2$ and $C_4^2$ correspond to the same transformation as well.

Thus, while you could imagine up to six different $S_6$ transformations, only two of those ($S_6$ and $S_6^5$) give new transformations not covered elsewhere.