Identification of a compound C10H12O with 1H and 13C NMR data 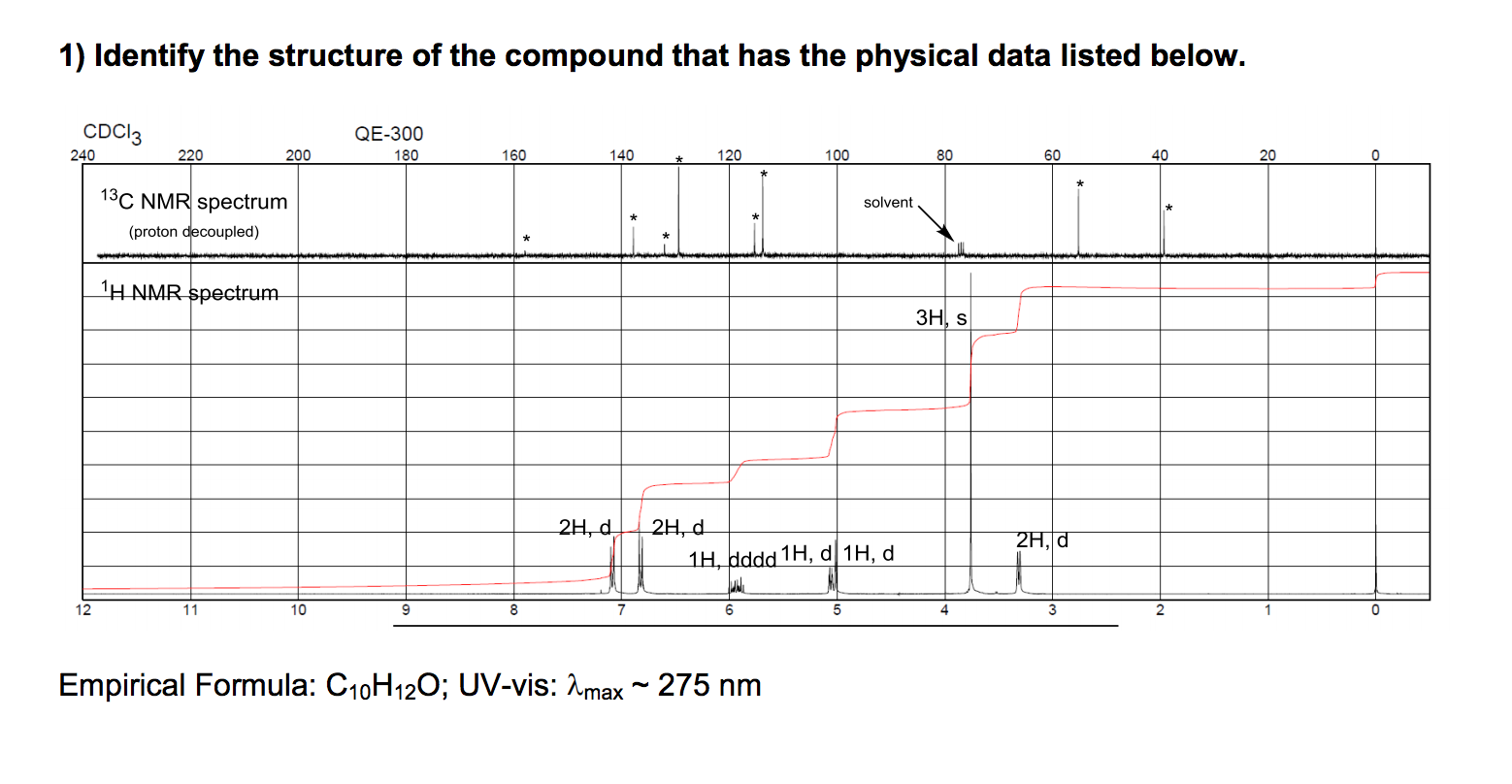 I was given this problem to do for Organic Chem II. I know that it's a benzene (unsat # 5), with 2 para-substituents due to the doublets in the 7 region of the HNMR. I know that the oxygen is not an OH due to the absence of a D2O shake. There's probably an alkene in one substituent to finish out the unsaturation number. However, I can't figure out what the 2 substituents are - but I'm guessing one's either an ether or ketone! Can anyone help?

Like you said, the 2 doublets at around $\pu{7 ppm}$ belong to a para-substituted benzene. The three single-proton multiplets around $\pu{5-6 ppm}$ belong probably to a single substituted alkene. A singlet and a doublet between $3$ and $\pu{4 ppm}$ belong to $\ce{CH3-{}}$ and $\ce{-CH2-{}}$ groups, respectively (Note that the signal that belongs to the $\ce{-CH2-{}}$ group is a doublet, indicating that it is adjacent to a carbon with only a single proton, so it is probably connected to the alkene).

The absorption maximum at $\pu{275 nm}$ gives us a hint that the disubstituted phenyl ring of our compound is not conjugated to the $\ce{C=C}$ bond.

Concerning the oxygen atom: it is definitely neither a carbonyl group (indicated by the absence of an intense peak at $\gt \pu{180 ppm}$), nor a hydroxy group. So it probably is an ether.

So far, we have two possible candidates:

However, the multiplets of the vinylic protons in the $\ce{^1H}$-NMR spectrum don't fit this compound well. The allyl group should give two dd signals for the terminal protons and a ddt for another vinylic proton. But the $J_2$ constant for terminal protons is very small ($\lt \pu{2 Hz}$) and can't be seen on some old NMRs, what would lead to the simple two doublets.

Why do we see dddd instead of ddt for $\ce{R-CH=CR2}$ proton? I'm not sure, but maybe this is because the $\ce{-CH2-{}}$ protons are diastereotopic. Then it makes sense.

zholyd is on the money with the correct solution; 4-allylanisole. And if you searched for this at from a very well known chemical supplier, you would probably find an exact replica of the spectrum presented. The overlaid 13C spectrum and 1H spectrum like this on the QE-300 are a real giveaway that this is an Aldrich spectrum.

The interest here comes from the interpretation of the splitting. Below is an expansion of the spectrum presented in the original spectrum (yes, I searched the Aldrich website). Is that a dddd or a ddt? Remember that in the truest sense a triplet is simply a doublet of doublets with identical coupling constants. So while it may be a little bit misleading to be called a dddd, as it implies different coupling for each d, strictly it is not incorrect. Looking closely at the spectrum, it certainly appears as a ddt, and this is how I have labelled the splitting diagram. And it looks textbook characteristic for an internal allyl double bond proton. 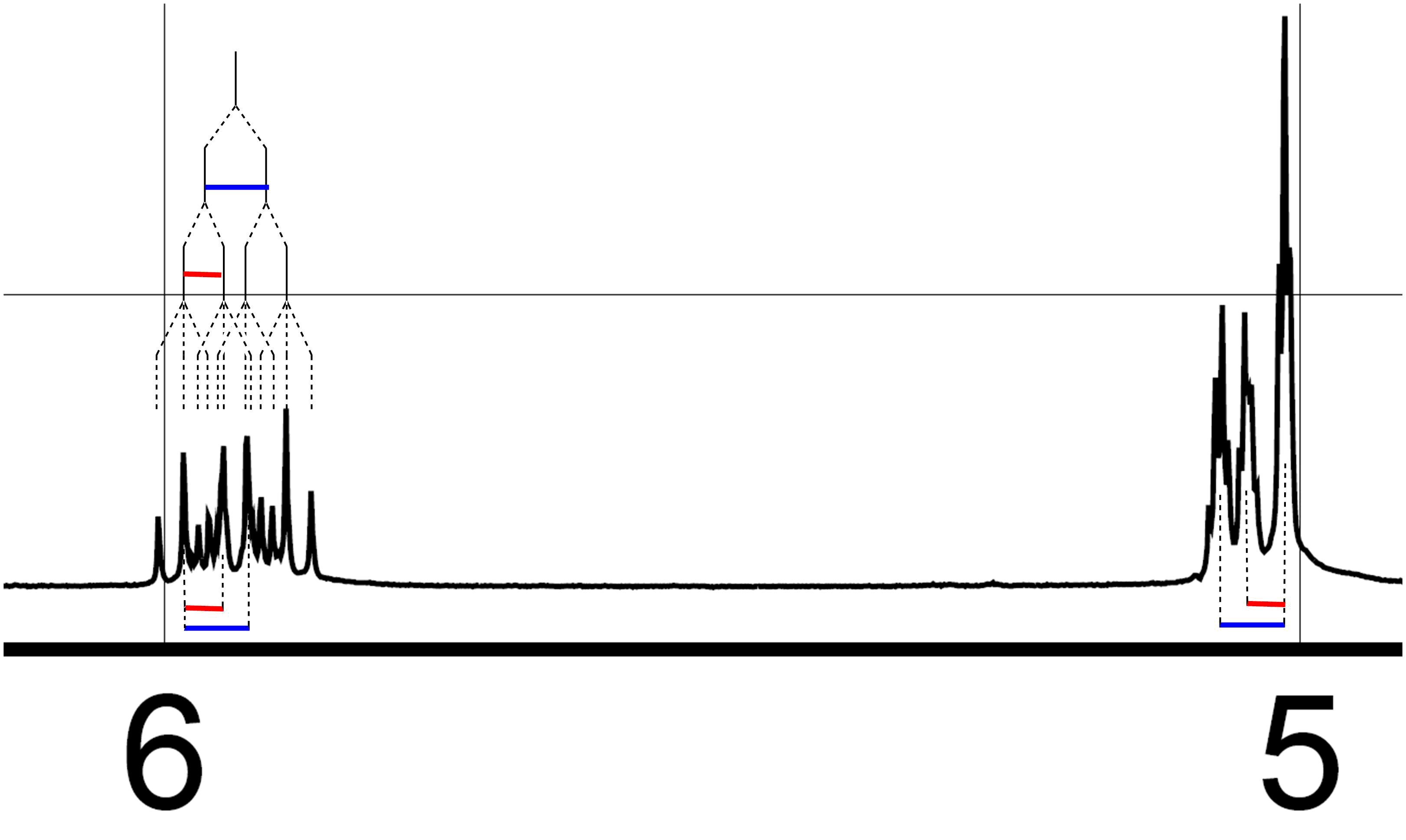 What is more interesting are the signals at about 5ppm. Knowing what we know about terminal double bond protons in an allyl group, we would expect one to have a trans coupling of ~15Hz, and another to have a cis coupling of ~10Hz. Clearly what has been labelled as the two separate signals do NOT have these couplings, and this is because these peaks are actually almost overlapping, and on the 300 giving rise to some 2nd order effects. I have labelled the cis coupling in red, and the trans in blue. You can see that they overlap on the right hand side, and so are not quite the two separate peaks as shown in the original question. The geminal coupling between double bond protons is usually very small, and can be seen to be giving rise to some 2nd order effects in these peaks.