The reaction in black below was presented in a set of lecture notes as an example of the use of the Tebbe reagent, however it's not immediately obvious (to me, at least) that the product should be the gem-dimethyl compound shown. 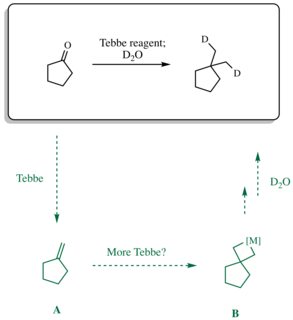 Mechanistically, it appears that the Tebbe olefination has taken place once (standard formation of Schrock carbene, [2+2], retro [2+2] to give the alkene and a Ti=O compound as a thermodynamic driving force). The alkene must then however react with more Tebbe reagent (or more Schrock carbene) to form a metallacyclobutane. It's at this stage that I feel it makes less sense: firstly, what is the involvement of the deuterium oxide, but secondly and more importantly, why doesn't the metallacyclobutane just collapse back down to form the thermodynamically favoured alkene product.

I've used Tebbe in the past to turn ketones into terminal methylene groups, but never encountered what appears to me to be an over-reaction (I'd actually always considered Tebbe to be fairly mild and selective).

After some digging around in Comprehensive Organic Synthesis I, there is some mention of this 'over reaction' (1985JOC50). The authors report that treating the ketone 22 with 1 equivalent of Tebbe reagent affords a mixture of the expected methynlenation product along with some of the gem-dimethyl product (i.e. implying that an excess isn't required, but the reaction is just not overly chemoselective for the cyclic ketone over the cyclic alkene).

Browse other questions tagged organic-chemistry reaction-mechanism organometallic-compounds or ask your own question.

2
What's the purpose of a Grignard reagent initiation?
7
Why can't the reaction of grignard reagent with carboxylic acid give a ketone?
8
Ketone/aldehyde synthesis from N-acylazetidines or aziridines
4
Grignard Reagent in THF vs in Diethyl ether
2
Reason for double acylation of ferrocene only occurring with certain reagent combinations
6
Why does a proton prefer to attack a double bond instead of protonating an alcohol in a reaction of unsaturated alcohol with sulphuric acid?