How to calculate mole ratio of two volatile compounds in distillation?

I have two volatile compounds (such as ethyl acetate and ethyl propionate). I am going to separate these compounds by simple and fractional distillation.

How do I calculate mole ratios of the two compounds and determine the boiling point temperatures of the first drop based on the liquid and vapor phase diagram?

If you have the vapor-liquid phase diagram, then it is easy to determine the vapor composition above a boiling liquid mixture (which should approximate the composition of your first drop in a simple distillation).

I'll assume you diagram looks like the one below, which is from the Wikipedia article on vapor-liquid equilibrium(and is mostly at the physical chemistry level): 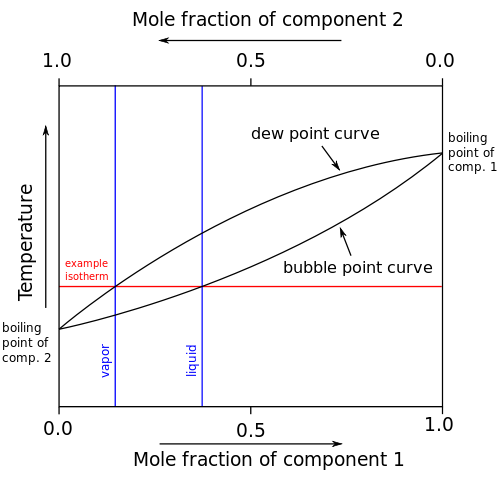 Let's say you have a mixture of components 1 and 2 that is 40 mole percent (mole fraction = 0.4) component one (approximately the blue line labeled liquid on the diagram). Draw a line vertically from that composition to the bubble point (or liquid) line. Then draw a horizontal isotherm at that point (red line on the diagram above). Where that isotherm crosses the dew point (or vapor) line, you can read down to get the composition of the vapor above that boiling liquid (blue line labeled vapor), about 15% Component 1 (and 85% Component 2). This represents a single vaporization-condensation cycle, which is what happens in a simple distillation.

In a fractional distillation, you can have multiple vaporization-condensation cycles (called theoretical plates). If you know how many theoretical plates your distillation column will have, then you repeat the process for the simple distillation several times. For example, if there are two theoretical plates, you have two vaporization-condensation cycles. After the first one, start over with a new liquid composition equal to the vapor composition after the first cycle. Draw a line up to the liquid line, draw the isotherm to the vapor line, and draw a line back down to composition. If you use the example I have been working with on the diagram I have shown, you should get about 5% Component 1. Repeat as necessary.

If you do not know how many theoretical plates you have in your fractionating column, then you can only make an educated guess.

Not the answer you're looking for? Browse other questions tagged organic-chemistry distillation or ask your own question.

3
Distillation: Simple vs Fractional
0
Is the following paragraph about steam distillation accurate?
3
Freeze distillation: Does efficiency depend on solubility?
4
Simple distillation & azeotropes
1
How to separate benzyl alcohol and meta-cresol
1
Acid-catalyzed hydration of alkenes
3
Normal Phase TLC using ethyl acetate as eluent
0
Concentrating mixtures of volatile compounds
0
Why is the temperature graph sigmoidal in simple distillation of components with very different bps?