Why is the endo product the major product in a Diels-Alder reaction?

I understand that the endo product is, at least in all cases in my textbook, the major product in a Diels-Alder reaction. However, I don't understand why this is the case.

The explanation in my textbook says that the endo product allows for more interaction between the diene and dienophile during the transition state.

I also found the following post, which suggests that secondary orbital interactions are the cause. Stereochemistry of product in Diels-Alder reaction

Then I found the following paper that indicates, at least to my understanding, that steric strain during the transition state is the main reason behind the endo rule (or at least for the example reaction in the article). https://www.ncbi.nlm.nih.gov/pubmed/24449044

So, I'm left wondering what is the reason for the endo rule?

What is the endo-selectivity of Diels-Alder reactions?

If the diene used in the Diels-Alder reaction has asymmetric substituents at the end carbons, and if the dienophile is unsymmetric, then two different isomers of the final adduct can form. The isomer, where the functional group(s) (usually carbonyl) on the alkene end up on the same side as the newly formed double bond, is called the endo-isomer [1]. The other one is the exo isomer. The naming of the isomers can be a little ambiguous in cases where there are multiple functional groups of different types on the starting alkene. Usually the electron-withdrawing group is considered when identifying which isomer is endo and which is exo. 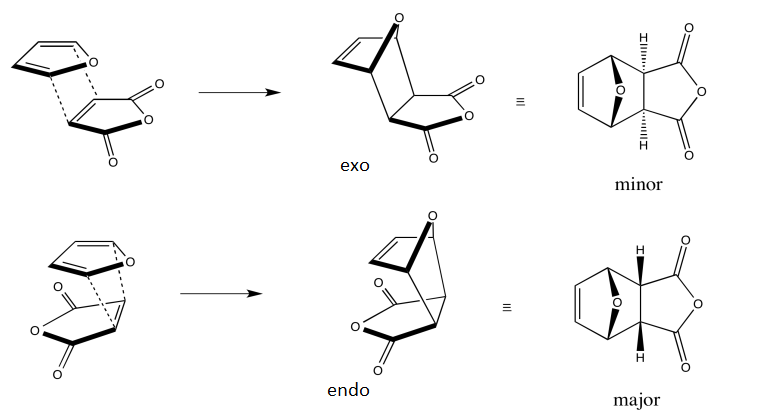 The experiments tell us that, in general, the endo-product is the one which is favoured kinetically i.e. it forms faster. This is not a rule as such, because there is no way to predict to what extent the endo product will be favoured. (In many cases, the exo product is the thermodynamic product i.e. more stable, so allowing the reaction to equilibriate will result in higher yield of exo product)

It's difficult to answer this question definitively, because there is still a lot of active research going on in the area. I will try to summarise the main effects which have been proposed as possible causes of the endo-selectivity.

The following diagram will be useful:

As you can see, in the transition state leading to the endo-product, the carbonyl part of the alkene can interact with the back of the diene, and the interaction is favourable, as the symmetry matches. In the transition state leading to the exo-product, this interaction would not be available, as the carbonyl group is away from the diene. For a long time, SOI was considered as the right answer, and was extensively invoked in explaining not just Diels-Alder reaction, but other types of cycloaddition reactions as well.

However, there are a lot of evidences, both experimental and computational, which calls into question the validity of SOI. There is a good paper from Salvatella et.al. summarising them: "Do Secondary Orbital Interactions Really Exist?" Acc. Chem. Res., 2000, 33, 658.

For example, the dimerization of butadiene was shown to have slight endo preference.

This was frequently used as an example of the SOI effect. However, computational studies at RHF and CASSCF level have found that the reaction proceeds via a stepwise mechanism. [6] If the mechanism is stepwise, not concerted, then it does not go through the constrained transition state which is required for the secondary orbital interactions to come into existence. So, we cannot invoke SOI for this endo-preference.

In certain Diels-Alder reactions, especially those involving the cyclopentadiene, steric effects have been proposed.

These observations can also be explained by SOI, but the trends in the endo-selectivity for a range of $\ce{R}$ and $\ce{X}$ groups seem to fit better to the steric argument.[5]

In a more recent study by Fernandez and Bickelhaupt, the selectivity was found to arise from activation strain, i.e. steric strain as the reactants approach the transition state.[12] They used $\mathrm{M05{\text -}2X/def2{\text -}TZVPP}$ to model the reaction of cyclopentadiene and maleic anhydride. 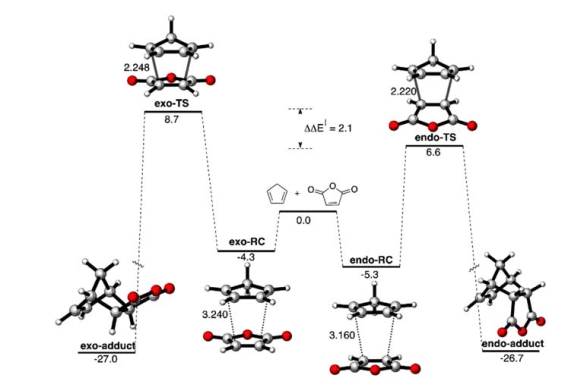 The above image, taken from their paper, shows the full reaction coordinate, with ZPE-corrected energies in kcal/mol and distances in Å. As you can see, the exo-reactant complex (exo-RC) is higher in energy than the endo one, suggesting that the strain comes into existence even before the TS. The extra strain in the exo-pathway is thought to arise from the steric repulsion between the methylene of cyclopentadiene and the oxygen of the anhydride.

Hydrogen bond-like interactions between C-H in alkene and the double bond has also been proposed as a cause of endo-selectivity in particular cases, such as the reaction of cyclopropene and butadiene.[8] Here, both steric effects and H-bond like interactions are thought to be present.

Electrostatic forces can be used to explain the unusual exo-selectivity of the furan+cyclopropenone addition.

In the exo-TS, there is a favourable electrostatic interaction between the electronegative O of furan and the electropositive carbonyl carbon of cyclopropenone. This makes the exo-isomer the preferred one. The exo-TS is about 1.81 kcal/mol lower in energy than the endo-TS, according to computational studies. [9]

Sustmann and others carried out computational studies on Diels-Alder reactions in both gas phase and with dielectric-continuum solvation.[10] They found that in the gas phase, the exo-TS is lower in energy i.e. kinetically favoured. Using a solvation model resulted in the endo-TS being the favoured one.

They suggested that solvent effect might be the cause of endo-selectivity. The endo-TS is generally more polar than the exo-TS, so it is stabilised to a greater extent in solvent. It is also observed that the preference for endo-TS increases the more polar the solvent is, which lends support to this argument. The gas phase exo-preference would also disprove the role of SOI effects, because they should be present regardless of solvation.

However, computational studies like these have to be considered carefully, because they were mostly carried out using HF or B3LYP methods, both of which severely underestimate dispersion forces (which are necessary to describe SOI). So, the results might be artificially skewed in the direction of exo-TS. [11]

All of this means that we are not really sure if there is a single cause that can explain the endo-selectivity in Diels-Alder reactions.

In an extensive experimental-computational study , Paddon-Row et. al.(2020) studied reactions of isotope labelled butadienes with mono- or di-substituted alkenes.[11] Surprisingly, it was found that mono-substituted alkenes (such as methyl acrylate) did not have a strong endo-preference when the reaction was done in benzene solution. Methyl acrylate and butadiene, for example gave 50:50 exo-endo product yield. Di-substituted alkenes showed higher endo-selectivity. In their analysis they suggested that SOI effects are important in some cases, whereas steric effects are forcing the selectivity in some other cases.

So, it might just be that different effects are working in different reactions, and somehow the end result is that endo-product is favoured in almost all cases. Then it might not be useful to look for one particular blanket cause of the selectivity, rather, each reaction has to be explained uniquely.

From what I know, there reason why the endo product is preferentially formed is still not clear and subject to further enlightenment. But it seems to arise from more efficient interactions between the pi electrons of the dienophile and the pi electrons of the developing double bond in the diene during the transition state. In this website you can the both transition states in 3d

Not the answer you're looking for? Browse other questions tagged organic-chemistry molecular-orbital-theory pericyclic stereoselectivity or ask your own question.