For molecules to be enantiomers, do the groups have to be non-superimposable mirror images even when rotated around C-C single bonds?

For example, if I rotate the Carbon-Carbon bond in B around 120 degree anti-clockwise, I would get the molecule shown in image C. C looks to me like a non-superimposable mirror image of A, hence A and C are enantiomers.

However, as drawn, A and B do NOT seem to be mirror images.

Are A and B enantiomers considering what happens after a bond rotation? 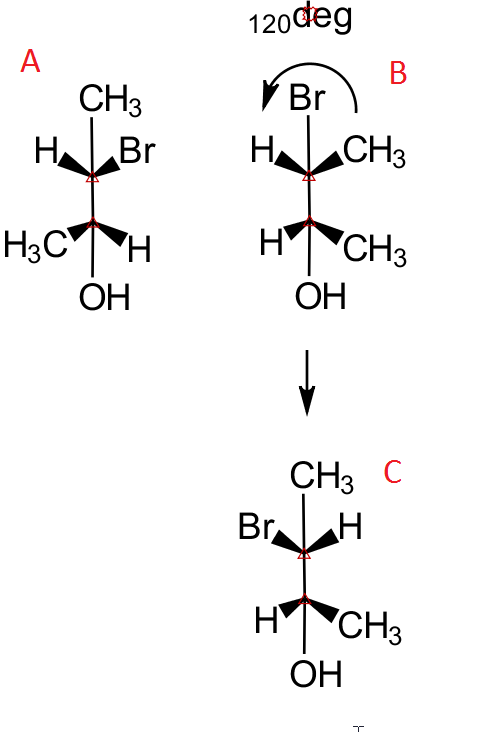 Note: ChemDoodle shows those red triangles saying "questionable stereochemistry". I'm not sure what is wrong but the molecules I drew may have some issues, but I think the question still holds.

Real molecules surely do rotate around their single C-C bonds all the time(*). So yes, if two models can be superimposed after an internal rotation of such sort, this means they represent the same molecule, as is the case with your B and C.

This, BTW, is the reason why you should orient all substituents in a standard manner when drawing your Fischer projections. Otherwise any molecule would have just too many variants, and you'll get bogged down in them. Think of rotating the upper group the third way (the first two being B and C). Think of rotating the lower group too...

Then again, I've rarely seen Fischer projections used for anything other than sugars. Typically people just determine the absolute configuration (R or S) and go with that. It gives you a definitive answer, after all.

(*) That is, most of them do. When you have bulky substituents, rotation may pretty well get blocked, and then you may be able to separate the isomers that are (nominally) produced by this rotation - they are no longer equivalent. Look at BINOL or BINAP, for example.

4
Is rotation of a mirror image allowed in order to determine chirality? Doesn't rotation alter the mirror image of the molecule?

1
Stereogenic C and enantiomers
1
For molecules to be enantiomers, do their bonds have to point the same way?
13
Are carbocations necessarily sp2 hybridized and trigonal planar?
2
FMO analysis of the [3,3] Sigmatropic reaction regarding geometry. Is it accurate?