Why is the Vitamin B complex, a "complex"?

I often come across the term "Vitamin B Complex" in my biology classes and innumerable times on the back of multivitamin packets, but what does the term "complex" here, even mean?

I'm still in high-school, and the only times we ever come across the term "Complex" in our Chemistry classes is when we're dealing with Coordination Compounds, but I don't think that's what our textbook is getting at when it says "Vitamin B Complex". I compared the structures of a few B-vitamins, but they don't appear to have anything to do with the coordination Chemistry kind of "Complexes".

My teacher tells me, that the term "Complex" here is supposed to indicate the existence of a wide range of B-Vitamins (Like $\ce{B1, B2, B3,}$ etc.). But I didn't find that 'explanation' satisfying, since there are all sorts of other vitamin categories (such as D and K) that have quite a few subtypes ( $\ce{D1, D2, D3, K1, K1, K3,}$ etc) but I've never heard of a Vitamin D Complex or a Vitamin K Complex for that matter.

So my question stands:-

What does the term "Complex" mean, with regard to the Vitamin B Complex? Do Vitamin D Complexes and Vitamin K Complexes exist as well?

It is essentially exactly what your teacher says: the term vitamin B complex is used because the structures assigned a name ‘vitamin Bx’ don’t really have anything in common although they are all somewhat important.

As to why nobody ever uses vitamin K complex or vitamin D complex: well, at least in my country those vitamins are very under-represented when compared to ABCE. ABCE vitamins are those often seen as the most important, the most valuable or similar.[citation needed] They are often advertised as being included in supermarket products. The advertising industry probably doesn’t want to ‘establish’ yet another thing they could add but would be rather cost-intensive.

I have been studying Vitamins for a while (Nutritional Biochemistry), and though I agree with the explanation of your teacher and with the answers already given,

Part of the reason has to do with their discovery:

The general definition of vitamins is described:

The vitamins are a disparate group of compounds; they have little in common either chemically or in their metabolic functions. Nutritionally, they form a cohesive groupof organic compounds that are required in the diet in small amounts (micrograms or milligrams per day) for the maintenance of normal health and metabolic integrity. They are thus differentiated from the essential minerals and trace elements (which are inorganic) and from essential amino and fatty acids, which are required in larger amounts.

In addition to systematic chemical nomenclature, the vitamins have an apparently illogical system of accepted trivial names arising from the history of their discovery.

For several vitamins, a number of chemically related compounds show the same biological activity, because they are either converted to the same final active metabolite or have sufficient structural similarity to have the same activity.

I believe initial classification was based on two forms- fat solubility and water solubility. It must have been elucidated through experiments with milk:

Indeed the "Vitamin B Family" has a lot of compounds (riboflavin, pantonthenic acid, biotin, thiamin, niacin, cobalamin etc) that are structurally unrelated, but were grouped possibly due to their discovery as they either had similar chemical property-water solubility abeit some forms of vitamins (e.g ascobic acid) are water soluble.

As the discovery of the vitamins progressed, it was realized that “Factor B” consisted of a number of chemically and physiologically distinct compounds. Before they were identified chemically, they were given a logical series of alphanumeric names: B1, B2, and so forth

From a pharmaceutical perspective...

The "complexity" of vitamin B compounds simply suggest a combination of different compounds that fall under this family. Because vitamin compounds are required in relatively large amounts compared to fat soluble counterparts, it makes sense to combine them as supplements rather than packaging 7+ pharmaceutical products as "Vitamin B1", "Vitamin B2", "Vitamin B3"... suplements, it creates more confusion and non-compliance instead their systematic names are used for example pyridoxine injection (vitamin B6), Nicotinamide tablets but where multivitamin are prescibed its just a "complex" of there compounds usually 5-6 of these "B" vitamins.

It is important to note that such compounds are requirement in very small quantities/day, and overdosing (through such these compounds can cause undesirable side effects).

Other forms of vitamins (fat soluble) are equally important but most of them are either stored in body in reserves e.g Vitamin A, others like Vitamin K are synthesised in the body by bacteria hence are needed in very small amounts This is the chief reason why there are fewer supplements of such vitamins (although they may be needed in special cases).

For a compound to be considered a vitamin, it must be shown to be a dietary essential. Its elimination from the diet must result in a more-or-less clearly defined deficiency disease, and restoration must cure or prevent that deficiency disease.

Vitamin D is not strictly a vitamin, rather it is the precursor of one of the hormones involved in the maintenance of calcium homeostasis and the regulation of cell proliferation and differentiation, where it has both endocrine and paracrine actions.

The name vitamin D1 was originally given to the crude product of irradiation of ergosterol, which contained a mixture of ergocalciferol with inactive lumisterol (an isomer of ergosterol) and suprasterols. When ergocalciferol was identified as the active compound, it was called vitamin D2. Later, when cholecalciferol was identified as the compound formed in the skin and found in foods, it was called vitaminD3.

The "Vitamin B" naming of these compounds must have been through discovery, and no clear experiments had accurately produced identity of these compounds, there were named as they were discovered but since they have been identified they they now have systematic names abeit vitamin B still being used today and are formulated as "vitamin B complexes" in pharmaceutical products (perhaps to avoid confusion) hence systematic names are used (folic acid, pantonthenic acid, biotin, thiamin, niacin, cobalamin etc) I have never come across complexes of other Vitamins. Remember for a compound to be named a vitamin it must fit the description above, but I am not disputing the fact that other compounds with similar biological activities exist as "K" group.

In J. Biol. Chem., 1913, 15, 167-175, an article titled The Necessity of Certain Lipins in the Diet During Growth, E. V. McCollum, one of the pioneers in vitamin research did indeed use the term "complex" and wrote:

Whether the resumption of growth is the result of supplying in the ether extract of egg or of butter, some indispensable organic complex of the chemical nature of the lipins, or is the result of a stimulating action of some substance accompanying the lipins, cannot be decided from the data at present available.

I didn't know that "complex" here meant a combination of the B vitamins; I had always assumed that it meant vitamin B12, which is a coordination complex itself: 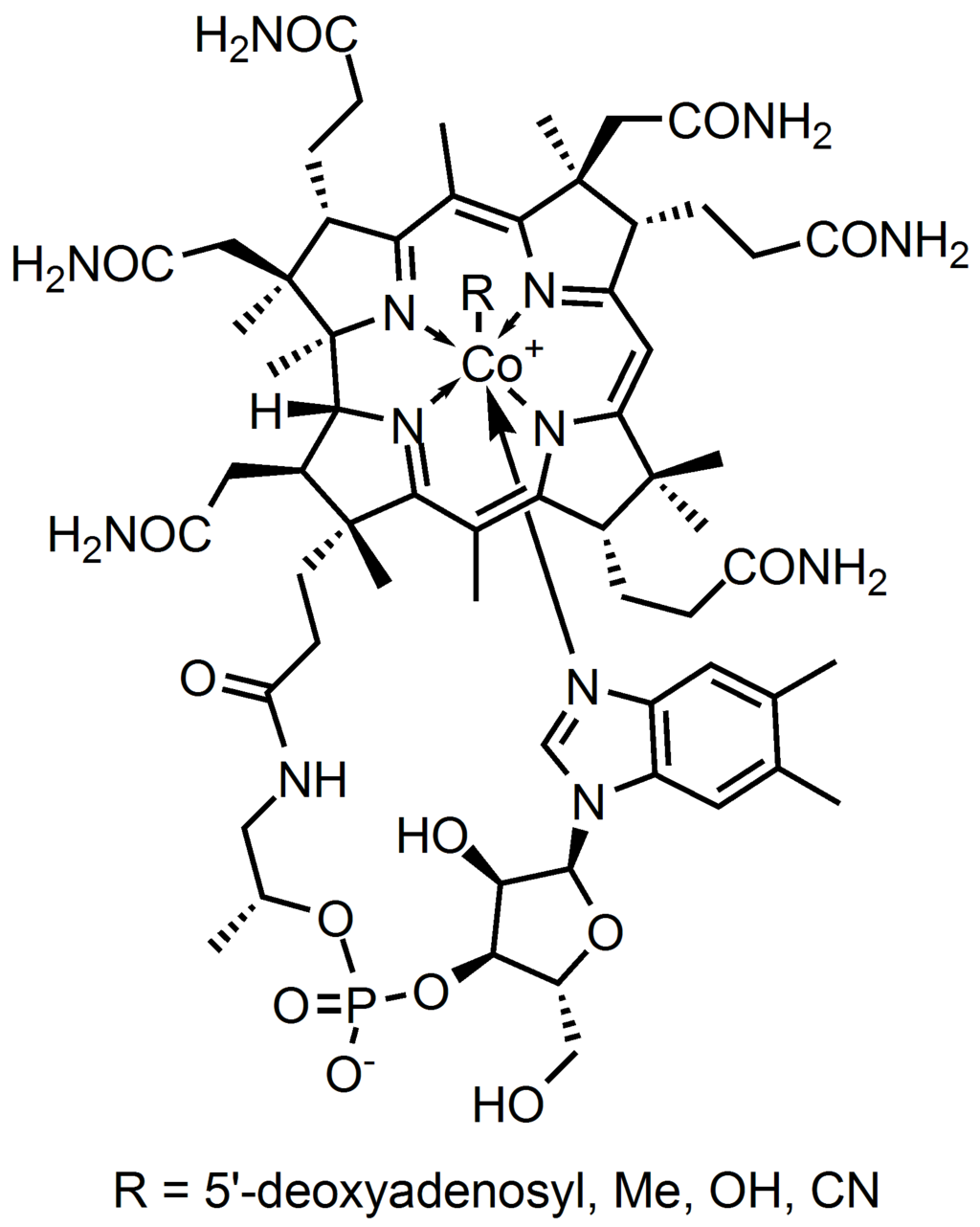 8
Why does milk flake?
6
Why is vitamin C called an antioxidant?
29
How 'heavy' should an element be, to be a "Heavy Metal"?
2
Does the term "Alkaline" necessarily indicate the presence of an actual alkali?