What exactly is the Horwitz equation?

During a laboratory exercise in a course on analytical chemistry, we were asked to calculate the $z$-score.

One way of optaining the $S_{\text{target}}$ was to use the so-called Horwitz equation:

As well as being useful, the Horwitz Trumpet is a feature of considerable theoretical interest. It is hard to avoid the assumption that a simple mathematical law that describes the behaviour of large numbers of methods over at least six orders of magnitude of analyte concentration must have some inherent meaning and deserves serious consideration. So far, though, nobody has managed to explain the strange empirical exponent from basic principles, although several people have made conjectures. Are we seeing the manifestation of a physical law here, or is there a psychological basis, perhaps to do with our perception of fitness for purpose?

There is a sure-fire paper in Nature waiting for somebody!

This might include an explanation of the relationship with the Horwitz equation.

The Horwitz function 1, also known as the Horwitz “Trumpet”, is an empirical relationship that has, thus far, not been derivable from fundamental principles. As noted by Thompson 2, and as shown below in Fig. 1 (from 2), the relative standard deviation of reproducibility (RSDR) increases as analyte concentration decreases: 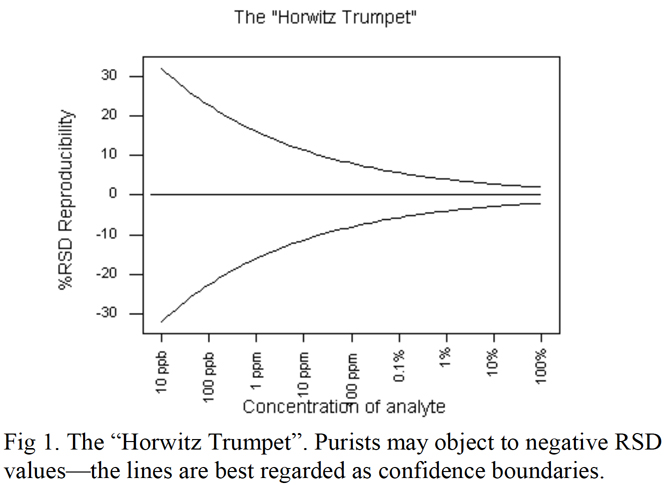 Horwitz formulated his expression after noticing a pattern in the relative standard deviations reported in many (thousands at this point) collaborative trial results. The following figure (a screenshot from Hanley [3, p. 12037]) provides the essential equations and background information: 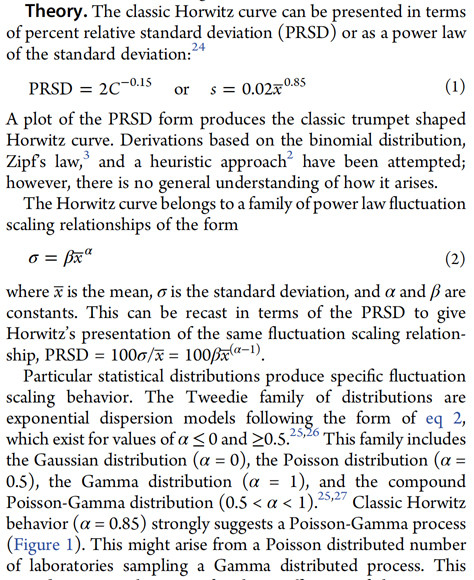 As Hanley notes, the Horwitz function appears to be in the Tweedie family of exponential dispersion fluctuation scaling relationships (https://en.wikipedia.org/wiki/Tweedie_distribution ). Specifically, the Horwitz function may be a compound Poisson-Gamma process, since the exponent, $\alpha $ in equation 2, is approximately 0.85. (More accurately, Thompson 1 notes that it is $1 - (log2)/2$).

Assume measurements are Gaussian distributed, with $\mu $ as the population mean and $\sigma $ as the population standard deviation, and assume both parameters are unknown. Let $X_{lab} $ be a single measurement, i.e., a random sample from the Gaussian distribution. Then $z = (X_{lab} - \mu )/\sigma $. So z, which is the so-called ‘z score’, is simply the signed difference parsed in units of $\sigma $. A small z score means the measured result is close to the true value, i.e., $\mu $, assuming no systematic error. A large z score means the measurement has relatively poor accuracy.

Also as noted by Hanley, attempts have been made to derive the Horwitz function from “the binomial distribution, Zipf’s law, and a heuristic approach”: see 4 and 5 below. However, these have not been generally been accepted and it is fair to say that the final word has not been written on the origin of the Horwitz function. As well, the Horwitz function potentially has a problem at zero analyte concentration, as noted by Holland et al. [6]. This is problematic because analytical blanks do not have infinite standard deviations.

Not the answer you're looking for? Browse other questions tagged experimental-chemistry analytical-chemistry or ask your own question.

19
What exactly happened when I added KOH to hydrogen peroxide?
3
How exactly is ammonium sulfate formed in a Kjeldahl analysis?
9
What is the accuracy of medical syringes?
11
What is the alternative to chromyl chloride test?
2
Rate Law Equation
15
What can this chemical be? (Qualitative Analysis)
1
What is the correct equation for calculating the electric potential of an electrochemical cell?
9
What are the limitations of the Hendersson-Hasselbalch equation?
1
How is the selective complexometric titration testing equation simplified?
1
What exactly is causing analyte protonation in electrospray ionization MS?