The compound shown below was synthesized by Professor I M Dimm who was astonished to find that it was exceedingly stable. Prof. Dimm had expected world renown for making what he thought would be an unstable compound. Dimm reasoned that with six double bonds and a triple bond in the molecule there would be 16 π electrons and thus, no aromatic character ($4n, n=4$, not $4n+2$). Where was his reasoning wrong? 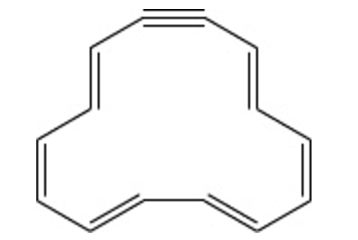 My reasoning so far:

The textbook answer to this is that the triple bond consists of two orthogonal π systems whose interaction with each other is symmetry-forbidden. So as the attached figure shows, the two p-orbitals marked in red cannot participate in the aromatic system if the molecule’s structure is as drawn; thus the two electrons do not count towards the Hückel rule, thus $4n+2$ is satisfied with $n=3$ and $4n+2 = 14$. 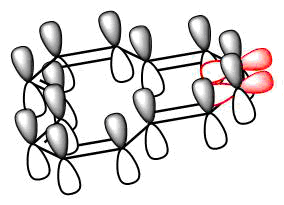 However, that is not the end of the story; merely its beginning. Professor Dimm should take the time to determine the actual crystal structure of the compound he synthesised. You might want to compare this with cyclodecapenta-1,3,5,7,9-ene. While it may look like a perfect Hückel-aromatic molecule, it does not adopt a planar structure due to ‘inverse Baeyer strain’ (the flat all-cis conformation would have $144^\circ$ angles, far away from the theoretical $120^\circ$ $\mathrm{sp^2}$ angles) or steric hindrance (the (1E,3Z,5E,7Z,9Z)-confomation is not flat due to steric strain of the internal hydrogens). A similar case can be made for (1E,3Z,5E,7E,9Z,11E)-cyclotetradeca-1,3,5,7,9,11-hexaen-13-yne as can be seen in the figure below.

The hydrogens coloured in red would overlap far too much to create a stable molecule. It will adopt a non-planar configuration to relieve this steric stress which is a greater source of destabilisation than giving up an aromatic system. We can only speculate on the molecules structure until we actually saw it. Unfortunately, it is also unknown as far as SciFinder is concerned. However, two geometric isomers of dehydro[14]annulene (as the molecule is also called) have been synthesised and isolated: 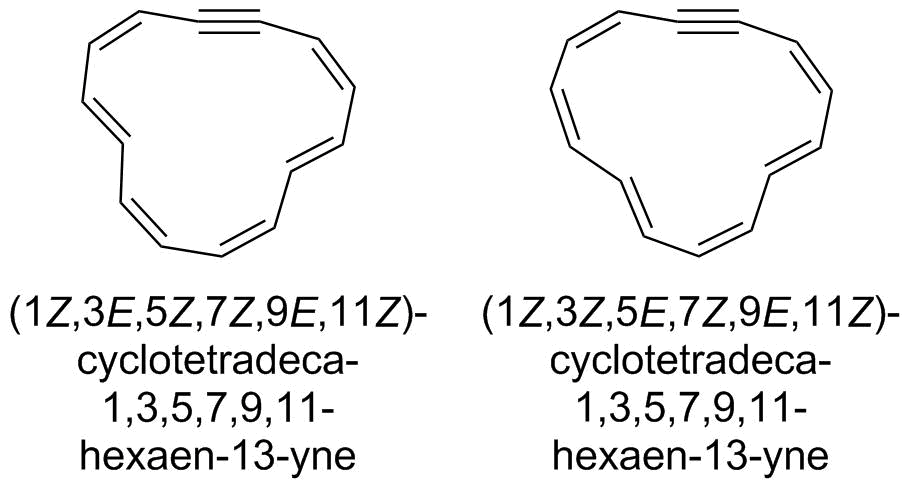 Interstingly, these compounds that were discovered in the 1960’s[1] show aromaticity by their chemical shifts. The internal hydrogens are shielded and display a chemical shift of approximately $-1~\mathrm{ppm}$ (symmetric isomer) and $0$ and $-1~\mathrm{ppm}$ (unsymmetric isomer). Similarly, the outer hydrogens appear as a group in the aromatic region.[2] Cresp and Sondheimer used low-temperature NMR studies to assign the correct structures.[2] And in 2013, Santander et al. performed calculations to determine the mechanism of interconversion between the two (‘by allowing a dilute ether solution to stand without protection from daylight, or, more rapidly by irradiation of a refluxing benzene solution with a $100~\mathrm{W}$ lamp.’[2]), which turns out to be via an interesting (in my opinion) Hückel-bond shift.[3]

Not the answer you're looking for? Browse other questions tagged organic-chemistry aromatic-compounds molecules or ask your own question.

17
Is the cyclopropenyl anion antiaromatic?
14
In Hückel's rule, can n be any integer?
3
What's the reason for the instability of ethylene dione?
3
How should a triple bond be depicted in skeletal structures?
5
Is an antiaromatic compound more stable than a non-aromatic compound because of more conjugation?
5
Why can't this molecule avoid being antiaromatic by becoming nonplanar?
0
Why is 11-oxabicyclo(4.4.1)undeca-1,3,5,7,9-pentaene aromatic?
6
Why is phenyl carbanion aromatic?
1
Why do electron-withdrawing groups deshield outer ring protons?