Numbering in phenolphthalein versus ascorbic acid

According to Wikipedia, the recommended IUPAC name for phenolphthalein is 3,3-bis(4-hydroxyphenyl)-2-benzofuran-1(3⁠H)-one, and for ascorbic acid is (5⁠R)-5-[(1⁠S)-1,2-dihydroxyethyl]-3,4-dihydroxyfuran-2(5⁠H)-one.

The subsituents do not take the highest priority here, rather, it is the parent molecule that determines the numbering. According IUPAC's organic chemistry book for nomenclature, the Blue Book, for heteromonocyclic components fused to a benzene ring:

P-25.2.2.4 (...) The presence of a single heteroatom determines the numbering in a monocyclic compound; the heteroatom has the locant ‘1’.

This gives the following numbering for the isomers of benzofuran:

The parent molecule of ascorbic acid is a furan ring, for which the numbering is dictated by skeletal replacement ('a') nomenclature:

According to the current version of Nomenclature of Organic Chemistry – IUPAC Recommendations and Preferred Names 2013 (Blue Book), heteromonocyclic parent structures with three through ten ring members and containing one or more heteroatoms are generally named by using the extended Hantzsch-Widman system; however, retained names (such as furan) are preferred for several heteromonocyclic compounds. When a single heteroatom is present in the ring, it is assigned the locant ‘1’.

Furthermore, the numbering for heteromonocyclic with retained names is explicitly shown in Table 2.2 of Subsection P-22.2.1.

Therefore, the oxygen atom in furan has the locant ‘1’.

Accordingly, the oxygen atom in the furan ring of ascorbic acid has the locant ‘1’, too, which leads to the systematic name (5⁠R)-5-[(1⁠S)-1,2-dihydroxyethyl]-3,4-dihydroxyfuran-2(5⁠H)-one.

In phenolphthalein, the furan ring is fused to a benzene ring. The rules for such compounds read as follows:

Accordingly, the systematic name of phenolphthalein contains the name of the parent structure ‘benzofuran’, which consists of the prefix ‘benzo’ followed by the retained name ‘furan’. The locant ‘1’ is assigned to the atom of the heterocyclic component next to a fusion atom. Therefore, the oxygen atom in the furan ring of phenolphthalein has the locant ‘2’. The locant indicating the position of the heteroatom is placed at the front of the name, which leads to the name ‘2-benzofuran’ for the parent structure in phenolphthalein.

Accordingly, the oxygen atom of the furan ring of phenolphthalein has the locant ‘2’, too, which leads to the systematic name 3,3-bis(4-hydroxyphenyl)-2-benzofuran-1(3⁠H)-one. 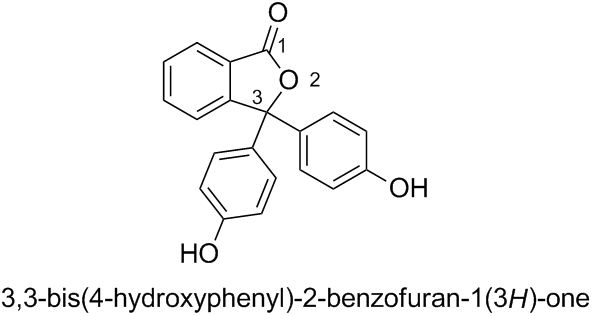 Not the answer you're looking for? Browse other questions tagged organic-chemistry nomenclature heterocyclic-compounds or ask your own question.

3
Nearest branch numbering
7
What do the numbers in the preferred IUPAC name for ascorbic acid mean?
4
pKaH of pyridine versus other imines
16
IUPAC systematic name of Carminic Acid
13
What is the most acidic proton of 2-methylcyclopent-2-en-1-one?
1
Is chloronitrobenzene and nitrochlorobenzene same?
7
Numbering cholesterol structure
8
Numbering bonds in cyclic compounds
6
Convention for numbering of carbons