Why might a planar, conjugated molecule be higher in energy than a nonplanar system?

I have a small molecule (23 atoms) for which I want to verify parameters in a molecular mechanics force field. 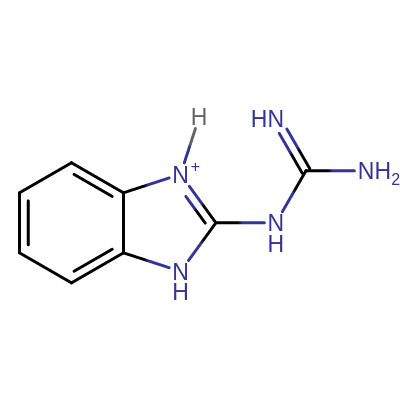 My first step is to look at the potential energy as a function of the dihedral angle, defined by these four atoms: 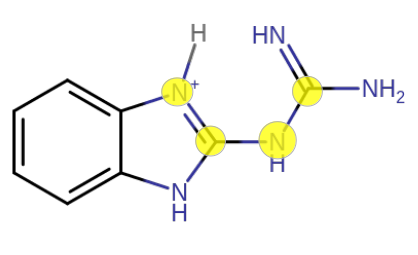 The results for the dihedral scan, rotating the guanidino tail from 0 to 360 degrees in increments of 5, looks like this: 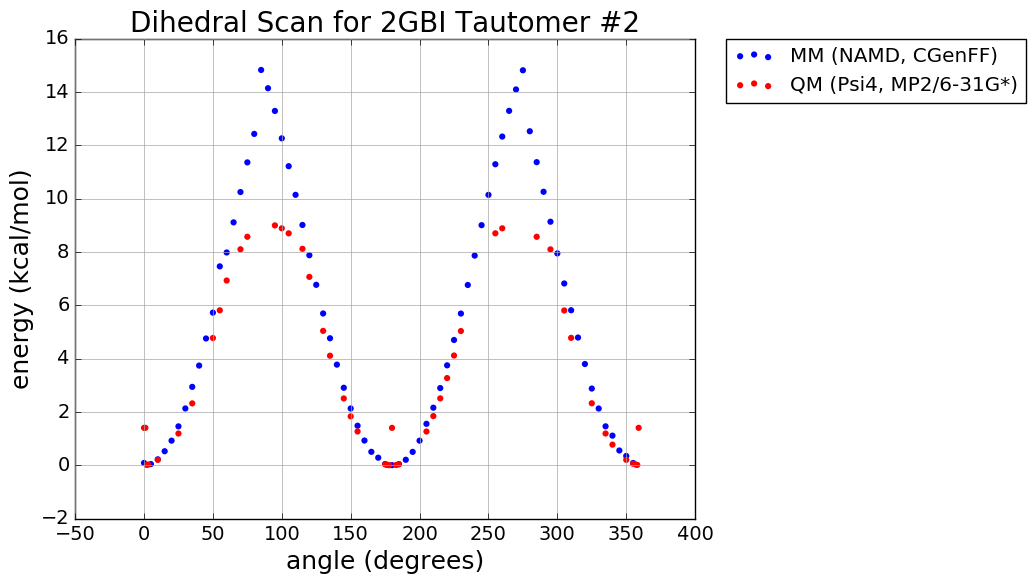 Alright, something is funky around the 0 and 180 degree structures. Honing in on 180, and performing a QM scan with increments of every 0.1 degrees, I see this: 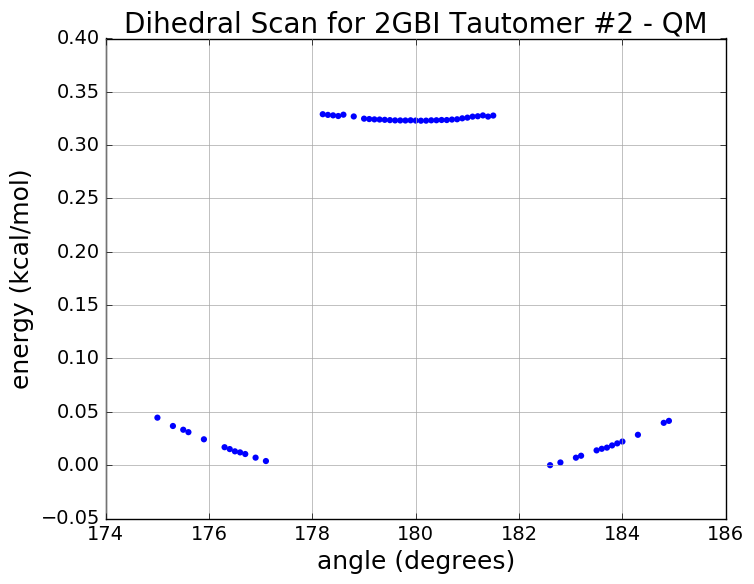 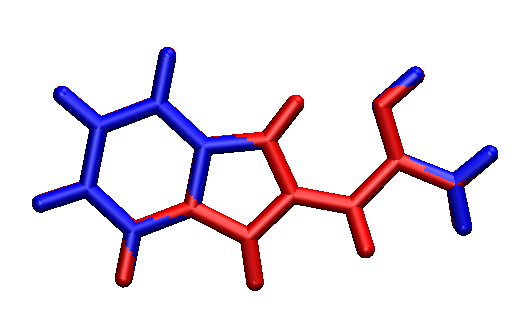 Let's assume that the QM calculations are to be trusted (this was run using a few different levels of theory). A mere 1° causes this shift between planarity and nonplanarity. Intuitively, if we think about the ring system being the same in both cases, this makes no sense, as a planar molecule should be better conjugated and thus lower in energy, correct? What other factors might account for this phenomenon?

I reproduced your calculations with PBE/def2-SVP (using Orca). The energy "jump" is even smaller than with MP2, however the causes are probably the same. So here is my answer:

Now in more detail. Here you can see the Minimum Energy Path (calculated with pDynamo using the NEB method) between the two symmetrically related minima. 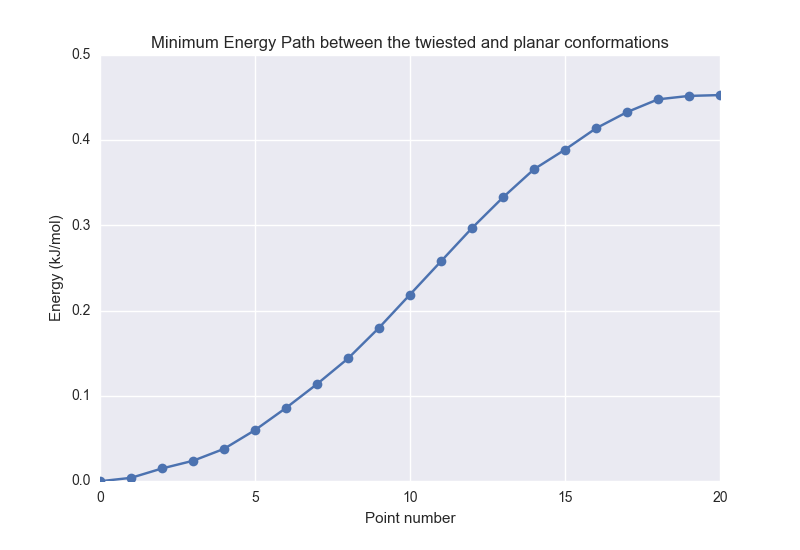 You can see that, as expected, the path is smooth.

The main change between the structures is the pyramidalisation of the terminal NH$_2$. This can be described by the N-C-N-H dihedral, which also changes smoothly as you can see here: 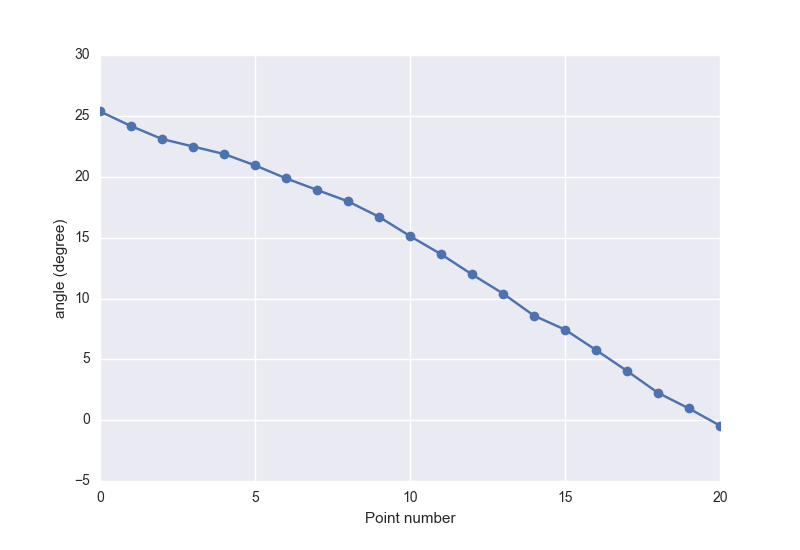 I don't think the reason why the terminal NH$_2$ is not planar is steric problems as @Ivan Neretin suggests. I think its more a question of nitrogen hybridisation, which is between sp$^2$ and sp$^3$. It is the same reason why aniline is not planar. This is discussed in these two questions:

Depending on the geometry of the hydrogen on the "imine" moiety of the guanadine, you could be creating a very strong syn-pentane interaction. In either case, either the lone pair or the hydrogen is being quite sterically crowded with with N-H's on the 5-membered ring.

The planar form of this species actually looks pretty bad. I would expect a bit of out plane distortion to relieve some of the strain.

An artificial jump like this usually points to convergence issues. You could try reading the wavefunction from the previous step to converge to nearly the same SCF solution. If it is not that then it could have to do with how the geometries are obtained. You might want to read the previous wavefunction and tweak the geometry converger to take smaller steps to stay in the minima and not kick out to a higher energy local minimum.

Not the answer you're looking for? Browse other questions tagged quantum-chemistry computational-chemistry electronic-configuration molecular-mechanics or ask your own question.

25
How to rationalise the resonance structures and hybridisation of the nitrogen in a conjugated amine?
12
Is nitrogen of aniline sp² or sp³ hybridized?

24
Why does the energy gap for π - π* transitions shrink with the size of the pi-conjugated system?
11
The energy gap between a pi-conjugated system with (2 bonding and 1 anti-bonding orbital) and (1 bonding and 2 anti-bonding) orbitals
5
Viewing a protein or bio structure in Chembio3D in its natural conformation
6
Why do solutions of electron in a box (and in a ring) predict coefficients for LCAO (linear combination of atomic orbitals) in 1D systems?
7
How to obtain curve energy and non-bonded interaction parameters (e.g. Lennard Jones parameters) with Gaussian?
3
Determining the torsion energy profile of butadiene by molecular dynamics