Predicting electronic geometry, observable geometry, and hybridization for any atom in a molecule

Can someone please explain the intuition around the answers to this problem:

I'm finding it very confusing because it seems like you have to nitpick between two resonance structures to get the desired results. Do we just always look for the "lowest" possible VSEPR in any resonance structure? Why isn't the observable geometry for "X" linear instead of none?

Do we just always look for the "lowest" possible VSEPR in any resonance structure?

In the figure above, I have used the curved arrow notation to represent how the lone pair on the nitrogen atom is delocalized into the $\pi$-system. In order for this delocalization to occur, that lone pair needs to be in a $p$ orbital. In order for that nitrogen atom to have a $p$ orbital, it must be $sp^2$-hybridized (or possibly $sp$-hybridized if applicable). All three of the atoms (N, C, and O) in the delocalized system need a p orbital, and thus must be $sp^2$-hybridized.

Once you have hybridization, then you have limited your choices of geometry:

Why isn't the observable geometry for "X" linear instead of none?

You are confusing observable geometry at an atom with molecular geometry. 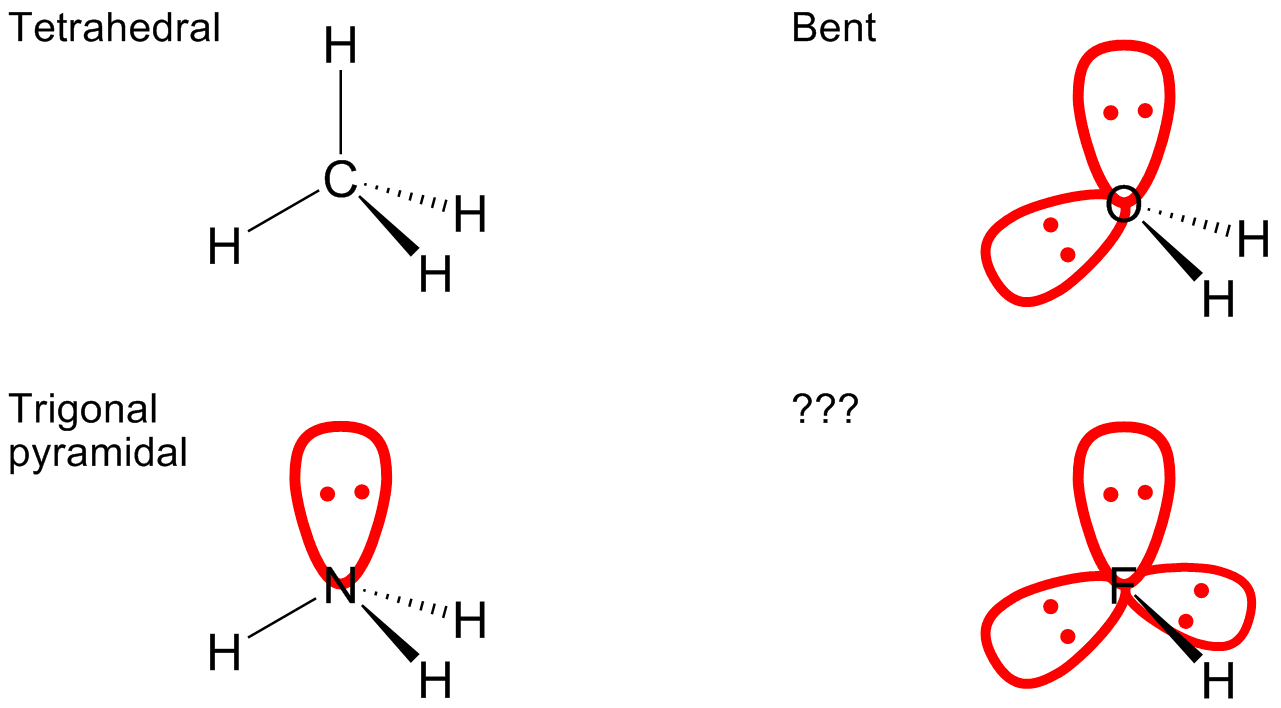 This is different than molecular geometry which deals with the shape of the entire molecule. Let's look at HF. The shape of the molecule is linear, because the two points define a line (segment). The geometry around F is "none" or undefined. We cannot describe the arrangement in space of the hydrogen atom relative to other atoms bonded to fluorine because there are none.

I've never seen this distinction made between "VSEPR geometry" and "observed geometry", and it does not make much sense to me. It would seem more correct that what they call "VSEPR geometry" includes the lone pairs, while their "observed geometry" is only the arrangement of atoms, ignoring the lone pairs. Thus, geometry around X is ill-defined ("none"), because it has only one neighbor (linear geometry require two neighbors, like the central C in O=C=O).

Not the answer you're looking for? Browse other questions tagged organic-chemistry homework hybridization resonance vsepr-theory or ask your own question.

56
How do I figure out the hybridization of a particular atom in a molecule?
10
Does the hybridization model gives us any further insight on Molecular Geometry?
8
Why an asymmetric geometry with sp3d and sp3d3 hybridization?
5
Bond angles of OCl2 and OBr2
13
Are carbocations necessarily sp2 hybridized and trigonal planar?
1
VSEPR theory and hybridization in determining the shape of a molecule
3
LDA and an aldehyde
1
Why is the molecular structure of water bent?