What is the common denominator of all the lipids?

I've read the lipids article on Wikipedia, but I couldn't understand the answer for my question and I'll explain why.

But when we are talking about lipid as a main family of molecules (like what we have we have with protein) then I can not understand what is the "amino acids" (parallel) of them, i.e. what is the basic unit of the lipids and what is the structure.

Well, I could understand that the fatty acids are the analogous for the amino acids, but the problem is that fatty acids according the article (and other schemes that I saw on google pictures), they are considered as subgroup of the lipids, and that says that not all of the lipids are made of them. So I don't have clue for the answer to my question. 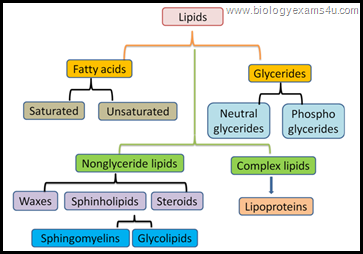 As you note, most biomolecules — or more precisely primary metabolites — exist as polymers that can theoretically be infinitely long and consist of well-defined monomers. This is true for nucleic acids and the building block nucleotides, for proteins made up of amino acids and for carbohydrates made up of monosaccharides.

Lipids, on the other hand, do not have that kind of polymeric possibility. In essence, they are trimers or monomers by definition, depending on how you look at them. Furthermore, all lipids contain the same (with same I mean identical) connective molecule namely glycerin or propan-1,2,3-triol $\ce{CH2OH-CHOH-CH2OH}$. Glycerin has three ‘sockets’, if you wish, namely its three hydroxy groups.

The ‘plugs’ that connect to glycerin always contain an acid functionality: typically this is either a carboxy group (fatty acids) or a phosphate (e.g. phophatidyl choline). The bond between ‘plug’ and ‘socket’ is an ester bond.

Both the fatty acids and the substituted phosphates can be structurally diverse. If you wanted, you could label the different fatty acids ‘monomers’ and the overall lipid molecule a ‘trimer’. However, the most typical difference between fatty acid residues is simply their length ($\ce{C16}$, $\ce{C18}$ or $\ce{C20}$ — typically multiples of 2) and their degree of unsaturation (e.g. stearate, oleate, linoleate and linolenate have increasing degrees of unsaturation). Attempting to teach students more than a few exemplary fatty acid residues or phophate residues is rather pointless since the choice of fatty acid hardly has any effect on the properties of the overall molecule, and aside from generally knowing what constitutes cellular membranes the same can in principle be said for the phosphates. Hence, students are hardly ever bothered.

Not the answer you're looking for? Browse other questions tagged terminology lipids or ask your own question.

9
What criteria have to be met to term a carboxylic acid a 'fatty acid'?

0
The definition of peptide, peptide bond and protein
2
Terminology: what's the difference between "monomer" and "protomer"?
7
Is it known for sure that bases feel slippery because of the production of soap/surfactant?
1
What happens during oxidative and hydrolytic rancidity of fats?
2
Techniques to extract lipids
2
What is the definition of a "Simple enzyme" exactly? Is it an enzyme that does not require a co-factor?
4
What does "parallel in-register" mean for a protein structure in a fibril?
9
Prostaglandin Nomenclature
2
What is the difference in mosM and mOsm units, if there is any at all?