How do you determine steric hindrance?

Steric hindrance is important for understanding regio-selectivity and stable conformation of molecules. I know the general definition, but can somebody explain to me in detail how does phenomenon of steric hindrance come about?

Like, to give a simple, hypothetical example, $\ce{CH4}$ is said to have no steric hindrance. But why does attacking molecule have no trouble squeezing past $\ce{H}$ atoms and attack center carbon atom. I know hydrogen atom is said to be small, but seriously how small is it?

I am asking this because when examples go beyond $\ce{H}$ atom and alkyl atoms I can't judge whether steric hindrance is present or not and thus what products are formed. Like in $\ce{(CH3)3CHOH^+}$, is there steric hindrance. It is a primary carbon cation but instead of two hydrogen then is $\ce{OH^-}$ group?

Normally we don't discuss quantum mechanics in this context, but an answer to your question requires it. 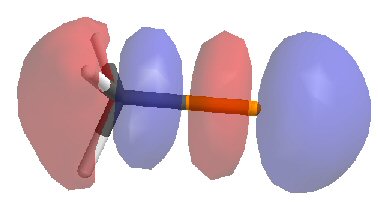 What we see here is the LUMO for CH3Cl. This is where an incoming nucleophile will 'stick' its electrons to form the new bond. Since the orbital is antibonding, electrons in the orbital will destabilize a bond, in this case the C-Cl bond. The actual meaning of the size of this orbital, rigorously, is a little unclear. However you can roughly infer that if a nuclephile gets its electrons here, a reaction is 'likely'. The reddish region to the left encompasses the hydrogens. That is also where the nucleophile has to go.

Compare the next from: 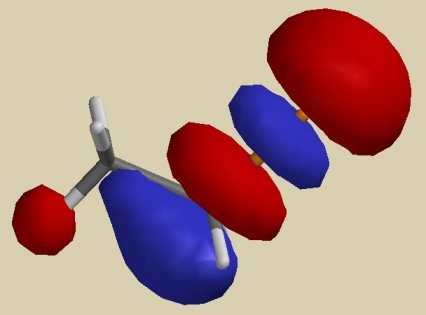 This is for ethyl chloride. There is an extra minor node on one of the hydrogens. Because it is small, it is less important than the other regions. Notice the methyl group is partly obscuring the backside of the orbital lobe near the electrophilic carbon. There are less ways a nucleophile can approach this to cause a reaction.

I'm no longer practicing so I do not have software to produce analagous images, so you will have to imagine the extrapolation. 1-chloroopropane would not add much more to the steric hindrance, because the 'extra' methyl group would be dangling on the same of the molecule as the methylene group. However, if we had two methyl groups, such as 2-chloropropane, the hinderance would be much more. Three groups, as in t-butyl chloride? Give it up, to much hinderance for a backside attack reaction.

11
Steric effects of a lone pair and piperidine
10
How much steric hindrance does a phenyl group offer?
13
Steric hindrance of an unbonded electron pair
19
Quantitative expression for steric hindrance
13
Are carbocations necessarily sp2 hybridized and trigonal planar?
4
Newman projections: how to tell which groups are bulkiest to determine what is the most stable conformation?